A Tour of the World’s Largest Diamonds, Part II Today, we continue our journey through the largest diamonds ever created in nature, starting with the Star of Sierra Leone. 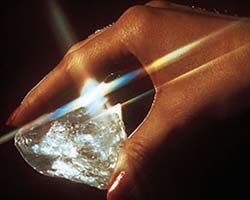 On October 3, 1972, Sierra Leone’s then president, Siaka Stevens, announced that New York City jeweler Harry Winston had purchased the diamond for nearly $2.5 million. Cutting was entrusted to master cutter Lazare Kaplan, who spent more than one year planning the stone. For the first time ever, Mr. Kaplan cleaved the stone on live television in the United States, following which the diamond became a household name throughout America.

Although the diamond was colorless, it did have internal inclusions that made cutting the stone complicated. It was initially cleaved and cut into 17 pieces, 13 of which were internally flawless. The largest polished diamond among them was initially cut into an emerald shape weighing 143.2 carats. However an internal flaw led to re-cutting, eventually resulting in a flawless pear-shaped diamond of 53.96 carats. Harry Winston later set six of the diamonds from the original rough stone into the Star of Sierra Leone Brooch.

The Incomparable was found in the town of Mbuji Mayi in the Democratic Republic of Congo (formerly Zaire) in 1984.  The 890-carat amber colored stone was found by a young girl in a pile of rubble from the nearby MIBA Diamond Mine which was considered too coarse to possess any diamonds. The diamond changed hands several times. It passed through the possession of De Beers before being sold to a small syndicate of prominent diamond experts including Donald Zale, chairman of the Zale Corporation, Marvin Samuels of the Premier Gem Corporation, and Louis Glick, a New York diamantaire. 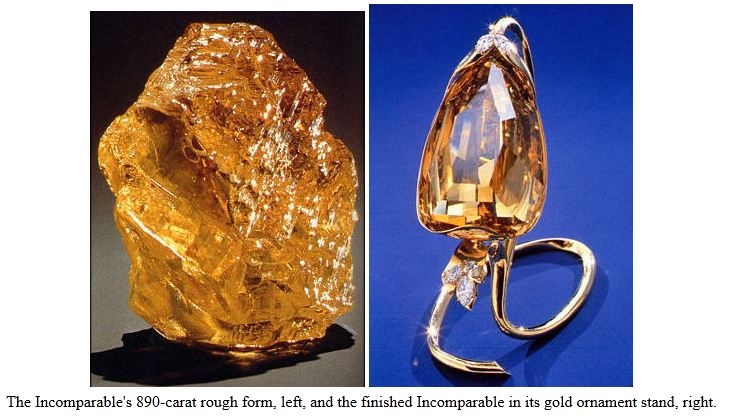 There was much deliberation over how to cut the stone, as it had the potential to yield a finished product larger than the Cullinan I, only with some internal inclusions. After more than four years of work on the stone, its owners opted to abandon the hope of achieving the world’s largest cut diamond and focused instead on quality over quantity. The final outcome became the third largest cut diamond of all time – a 407.48-carat stone with a very unusual cut, later named a triolette. The fancy brownish/yellow stone was graded internally flawless. An additional 14 stones were cut, the largest being a 15.66-carat kite shape.

Due to its unusual shape, the diamond necessitated a specially designed stand to help reflect light and enhance its brilliance and color. While on display in London and after being cleaned by its curators, the stone was inadvertently placed upside down in its stand, and more than 10 thousand visitors likely saw the diamond this way before the error was discovered. In 2002, the Incomparable became the largest and most expensive diamond ever offered for sale by internet auction on eBay, but failed to sell for the reserve value of $15 million. It is believed that one of the original partners on the stone, Louis Glick, still owns it to this day.

November 2015 was an incredible time for Canadian miner Lucara Diamond Corporation. Within 24 hours of the discovery of the 1,109-carat Lesedi La Rona, the company announced that it had unearthed the sixth largest gem-quality diamond ever discovered; though this stone was outshone by its larger cousin in the global media. The stone is yet to be named, and will most likely be named by whoever purchases it.

The origin of the Great Mogul Diamond is shrouded in mystery and its subsequent history by intrigue and murder. The stone was believed to have been found around 1650, most likely from the Kollur Mine in the Golconda region of southern India. It was gifted in its rough form by Emir Jemla, a wealthy Indian general, to Shah Jahan as a diplomatic gesture between the two families.

A Venetian lapidary named Ortensio Borgio was assigned to cut the diamond, but chose to grind the stone to remove inclusions and caused damage to it, including significant weight loss. The Shah showed mercy on the man and instead of executing him, he fined the cutter for all the money that he had. The stone was later cut into a very unusual shape by today’s standards, resembling a faceted egg cut exactly in half through the middle.

The stone was taken with the spoils of war in 1739 when Persian ruler Nadir Shah sacked Delhi. However, the Persian leader was assassinated just a short time later, and this magnificent diamond was stolen, never to be seen again. The fate of the Great Mogul remains unclear to this day but it is speculated that it was re-cut to disguise its true origin. The Orlov Diamond, a 189.62-carat diamond with a very similar shape and color, is thought to be the modern day remains of the Great Mogul.

The Millennium Star was discovered quite close to the Incomparable in the town of Mbuji Mayi in the Democratic Republic of Congo (formerly Zaire) in 1990. At the height of the country’s civil war, De Beers purchased the stone for an unknown sum.

Cutters from the Steinmetz Group were selected to cut the diamond.

The diamond was cut in what Steinmetz cutters described as an “operating theater” much like a sterile hospital operating room. The temperature was kept constant and measures were taken to ensure no dust could enter the room or get on the cutting scaifes. More than a hundred plastic models were made of the rough stone to assist cutters in their planning. 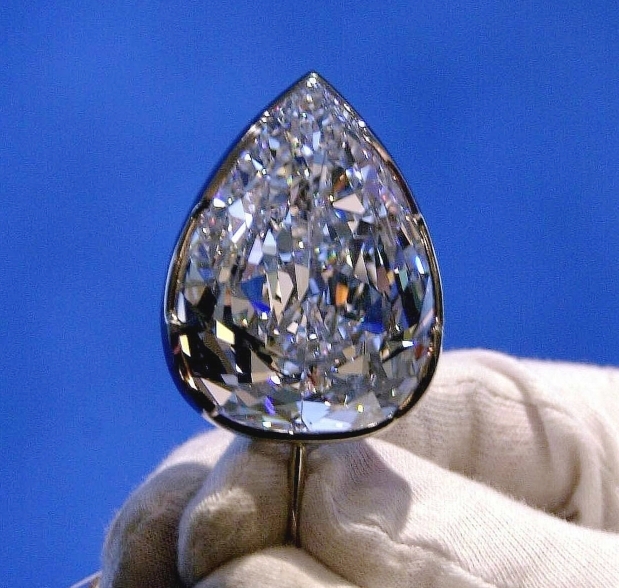 At first, the rough diamond was cleaved into three. The results from two of those pieces are unknown, however the largest piece became a 203.04-carat pear-shaped D-Flawless stone, the second largest faceted D-Flawless in existence. At the time, De Beers Chairman Nicky Oppenheimer insured the stone for £100 million.

The Millennium Star is so named because it formed part of De Beers’ Millennium Diamond collection, which was on display in London in 2000 and seen by more than 10 million people.

On November 7, 2000, while the Millennium Star was still on display, a criminal gang tried to steal the incredible gem stone. Their attempted raid on the Millennium Dome that housed the collection was thwarted by the Flying Squad of London’s Metropolitan Police Service. Had it been successful in their heist, the gang would have walked away with an estimated £350 million worth of diamonds.