A Tour of the World’s Most Famous Large Diamonds: Part V We continue our journey through the largest diamonds ever created in nature with the “De Grisogono” diamond.

This 587-carat rough diamond known as the "De Grisogono", or sometimes referred to as the "Spirit of De Grisogono," is the largest cut black diamond in the world, at 312.24 carats.  Because it is a black diamond, it can be cut from the original 587 carat rough stone without much consideration of internal imperfections and inclusions that often lead to smaller polished gems.  The stone was mined several decades ago in the Central African Republic, and was acquired by the famous Swiss jeweller De Grisogono.

The stone was cut using the centuries-old Mogul diamond cutting technique, which places much less importance on symmetry and light refraction, typical for black diamonds.  The stone has since been mounted into a ring that features 702 smaller white diamonds. 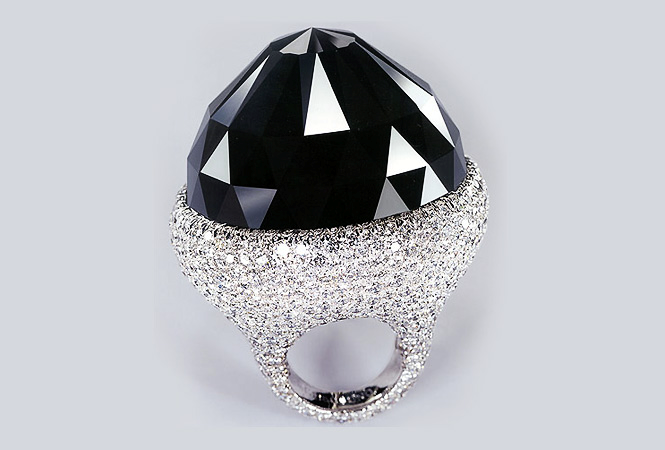 In 2002, a 581-carat stone was found in the Amazon River in Brazil.  It took expert cutters in Antwerp more than two years to produce a 230.17 carat H color, VS1, pear-shaped stone.  The stone was purchased in 2007 by American hotel and casino magnate Steve Wynn, and mounted into a platinum necklace by Cartier.  The setting alone is believed to have cost nearly $1.1 million.

Since then, the "Wynn Diamond" has had a tumultuous and troubled history.  In 2011, Wynn was in negotiations to sell the diamond to a Texas-based diamond dealer for $23.5 million, however the deal fell through over contract issues, with both sides accusing the other of breach of contract.  Soon afterwards, Wynn found another buyer, however that sale was also voided when the first buyer claimed ownership of the stone.  Court documents showed that photographs might have been doctored to make it look as if someone else owned the stone.

The current whereabouts of this enormous diamond are not entirely clear, although it is likely that the diamond is still owned by Mr. Wynn, as no information about a public sale can be found.

This stone yielded the largest cushion cut diamond in the world, and belongs to Chinese casino magnate Stanley Ho and his Sociedade de Jogos de Macau, S.A group.  Since Ho purchased the stone in 2007, it has been on display to the public at Grand Lisboa Hotel and Casino in Macau as part of the hotel's commitment to "delivering ultimate luxury to its guests."  Mr. Ho purchased the stone from famed jewel collector Robert Mouawand for an undisclosed sum. 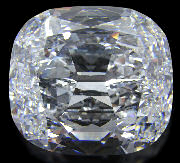 The stone weighs 218.08 carats and is graded as a D color, Internally Flawless cushion cut diamond.  It is believed to be the second-largest D Flawless diamond in existence, after the Centenary diamond.  The original rough diamond was discovered in Angola in 2003 and purchased by Mouawand.  It remained without a name until 2007, which is unusual for larges stones of this magnitude.

Continuing with large diamonds discovered in Lesotho, the Letseng Star diamond was recovered in August 2011.  Similar to many other large diamonds before it, this stone was cut by the manufacturing arm of Laurence Graff, who owns a 12.4% stake in the Gem Diamonds mining company, the owner/operator of the Letseng mine. 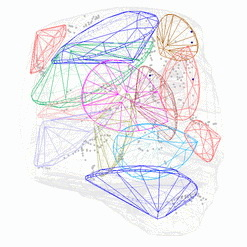 Graff’s team set out to create something remarkably unique in the industry, and succeeded in producing twelve matching pairs of pear-shaped diamonds, as well as one larger main stone.  Each stone was graded as D Flawless.  In total, this unique collection included more than 165 carats of D Flawless stones.  The decision to create the set of matching stones came after six months of planning and preparation.

The 511-carat Venter Diamond was a yellow color octahedron discovered in the Nooitgedacht alluvial mining region of South Africa in 1951.  It was named after the owner of the mine at that time, Jacobus Johannes Venter.  Mining at that time was done by local laborers who each received a 15 x 15 meter plot of gravel.  Any diamonds recovered on their plot were sold to the owner of the mine.  Although difficult to confirm, the Venter is believed to have been sold for $38,000, out of which the mine laborer received $840.  The stone was ultimately cut into twenty individual stones, all pale yellow. 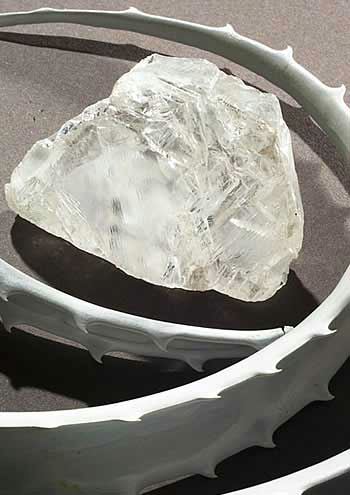 In February 2010, this white diamond – whose clarity grade is rated Flawless – set a record price for a rough diamond, when it sold at auction for $35.3 million. The purchaser was Hong Kong jeweler Chow Tai Fook, and the sale was generally heralded as indicating China’s growing importance as a consumer market for diamonds, as well as a coup for the jewelry group itself.  Chow Tai Fook Group Chairman Dr. Cheng Yu-Tung expressed his delight at the group’s acquisition of the diamond:  “This spectacular and high-quality diamond is very rare and exceptional. Chow Tai Fook Jewellery’s repeated success in acquiring world-renowned diamonds is backed by Chow Tai Fook Group’s strength and endless pursuit of perfection in providing our customers with unique diamond pieces,” the chairman stated.

The Letseng Legacy stone yielded more than 225 carats of polished gems, including a matching pair of 50-carat pear shaped gems, and a 35-carat round brilliant gem.  A total of twenty individual stones were cut from the original 493.24-carat rough stone.  The stone was announced in September 2007 and was purchased at auction by Graff Jewellers in November 2007 for $10.4 million. 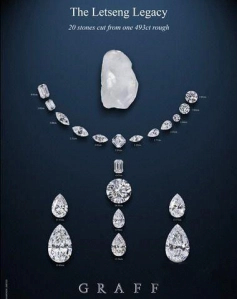 Known locally as "Leseli La Letseng," or "Light of Letseng," this stone's claim to fame is that it produced the world's largest D Flawless round brilliant diamond, now known as the Graff Constellation.   The rough stone was initially discovered in September 2008 and bought by Graff Jewellers for $18.4 million before being turned into a 102.79-carat finished gem. 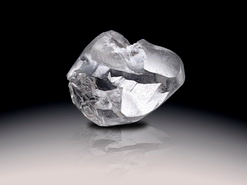 The Jacob-Victoria stone has a long and storied past that could fill a short novel.  Dating back to 1884, the precise origins of the diamond are not entirely clear, however it is believed that the stone originated from one of the many mines operating in the Kimberley region of South Africa at that time, most likely the De Beers mine.  It is believed that the stone may have gone by many names through history, including the Jacob, the Victoria, the Imperial, and the Great White Diamond.

Some believe that the stone was smuggled out of the mine by a small group of security personnel who were able to pass in and out of the mine without the customary physical searches that most workers were subjected to.  There is even a legend that some members of this small group later lost their claim to the diamond after a long night of gambling.

By 1891, the stone was put up for sale by Alexander Malcolm Jacob, and the name Jacob Diamond became more affixed to the stone.  The stone was offered to Mahbub Ali Khan of Nizam of Hyderabad.  The Nizam initially showed only lukewarm interest in the stone, but later purchased it for 23 lakhs, or about $35,000 in today’s dollars.  It was only many years later, after the death of the last Nizam, that Osman Ali Khan found the Jacob diamond in the toe of his father's shoe at Chowmahalla Palace.  He reportedly used it as a paper-weight for some time before its true value became apparent.

In 1995, after much litigation, the stone was sold for $13 million to the government of India, and is currently held at the Reserve Bank of India, Mumbai.  The stone was on display between 2002 and 2007 at the Salar Jung Museum Hyderabad.

Institutionalizing Diamonds as an Asset
A New View of Diamonds as Assets, Not Expenditures