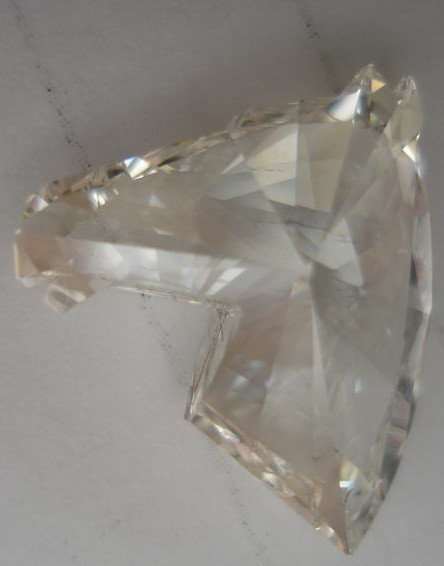 When we talk about unusual diamond cuts, the Horse Head is one that a surprising number of people are familiar with. The shape was invented by Henri Daussi Loots, an Antwerp master diamond cutter, founder of the New York based jewelry company that still bears his name. The Horse Head is more common than one might expect and GIA even has a 'Horse Brilliant' shape definition for grading Horse Head diamonds. While there are many examples of poorly cut Horse Heads that only superficially resemble a horse, a well-cut stone is unmistakable. Some more adventurous cutters even claim to be able to create stones that distinguish between a mare and a stallion.

The US patent for the 'Butterfly Gem', describes the stone as follows: A cut stone having a crown (21) and a pavilion (23), the crown having peripherally four indents orientated face to face and forming a cross, the appearance of the crown of the stone forming a butterfly.

Canadian Guy Couture, who holds numerous patents in the jewelry industry - including unique clasps - developed the cut and the patent in 1998. The Butterfly Gem is licensed exclusively through a Quebec based company called 'Papillon Gemme,' which is French for Butterfly Gem. Although butterflies are a popular choice for jewelry manufacturers and other diamond shapes are frequently fashioned into butterflies, the Butterfly Gem is the only cut where an entire single stone is formed into a shape resembling the winged insect.