A focused, limited, yet very clear pickup in demand for polished diamonds took place in April among wholesalers in most markets. Contrary to this small uptick in demand, traders are reporting a very slow market, citing a weak Basel show in late March, which didn’t generate much after-show activity, and the Passover holiday, which sent many traders on a 10-day vacation.

Given the combination of Passover and Easter holidays, plus the uncertain political environment, the loose diamond business was largely on vacation among American diamond traders. Several US traders said that both the Hong Kong as well as the Basel jewelry shows were disappointing. Looking internally, the trading atmosphere among these traders is quiet, and many of them are waiting to see the results of the larger retailers: Macy's, JC Penney, and Sterling.

The main concern is store closings, and the inevitable inventory returns to dealers and manufacturers. Traders fear that a few thousand specialty jewelry stores will close in 2017, on top of the store closings at the major stores, and they are deeply concerned about the hard impact it will have on their business. In the near-term, traders have low expectations for Mother's Day, pinning their hopes on the wedding and engagement season, which starts in early May.

Demand for rounds improved for G-J color goods, SI-I clarities in almost every size range, and in some areas this extended to DEF goods too. Well-established retailers are looking for 1-2 carats in commercial (SI to I2) qualities, anticipating the engagement and wedding season that will start soon.

There is a pickup in demand for fancy shape, 3-5 carat oval and pear shapes, but only for the best makes. These goods in any other make are not in demand at all. Square shapes, VS-I in 0.70 to 4 carats are in better demand.

The Indian diamond market suffered from large swings in the past month. Some are due to the Passover slowdown, and some to the pick-up in demand that followed the Hong Kong jewelry show. The polished market firmed up a bit mid-month, and slowed down again by the end of the month. In between, rough diamond prices had firmed up, which led to an upward pressure on polished prices.

India was the only market that reported any decline in demand for polished diamonds, mainly in square shapes, where top to mid-quality and top color goods, 0.50-0.99 carats, lost interest among buyers. This is true also with a few 1-carat squares.

Rounds, thirds and larger D-M, IF-SI goods were in rising demand, while sporadic declines were noted for IF-VVS rounds among half and one carats. Demand for fancy shapes was largely unchanged, although a few sporadic peaks in demand were reported.

The Israeli market screeched to a near standstill during April. Wholesalers and manufacturers started to slow down activity two weeks prior to Passover. During the week-long holiday, activity was near nil. From the perspective of the local wholesalers, there were no notable changes in demand during the month.

After the rejuvenation in activity during and after the important trade show in Hong Kong, the local trading market slumped back to its usual slow pace. Hong Kong’s overall economy is slow, with a notable exception – real estate. Already very pricey, prices are climbing high, and according to one estimate, with an average monthly salary of HK$15,500, it will take a resident decades to buy a tiny 400 square foot apartment. With that in mind, HK residents are unwilling to spend on luxury items, preferring vacations to jewelry.

However, Hong Kong has always relied on tourist traffic for luxury sales. A sharp decline in spending by tourists from Mainland China following a major crackdown on corruption resulted in shops facing difficulties. It is not only that overall spending is down; independent jewelry stores are finding it difficult to compete with the major jewelry chains, most notably Chow Tai Fook and Chow Sang Sang. As a result, they are not holding large inventories or a wide variety of items. In the past, independents shifted to relying on local customers and orders, but with the decline in spending on luxury, that customer base is not keeping smaller retailers afloat either.

In the Shenzhen jewelry district in Mainland China, where there are several hundred jewelry stores, most are empty too, plagued by the same hardships.

Moving items in April were rounds, 0.30-0.70 carats, D-H colors in VS-SI clarities. Demand for most other rounds was unchanged from March. There is demand for marquise and pear shapes 0.50-0.90 carat, DEF / VS-SI, and for emerald shapes from 0.20-0.70 carat DEF / VVS-VS. In fancy color, fancy yellows weighing 2 carats and larger, and fancy pink 1 carat and larger, are in good demand.

LVMH saw a 5% rise in overall revenue, to €37.6 billion. Their watch and jewelry division posted revenues of €3.5 billion, and a 6% rise in profit driven by improved sales at Bulgari and Tag Heuer.

After coming under fire over allegations of sexual harassment and diamond switching as reported on JCK, Signet published its first Corporate Social Responsibility (CSR) report, which benchmarks the company’s responsible sourcing and global CSR initiatives. Perhaps more important in terms of defending its name, the company also announced the appointment of a former federal judge to conduct a thorough review of the company’s policies and practices regarding equal opportunity and workplace expectations.

De Beers reported that during its third rough sales cycle, sold some $580 million worth of rough diamonds, up 5% from the second cycle, as demand is improving. However, the company has seen a 16% decline year-over-year. In its ongoing battle against undisclosed lab-grown diamonds, De Beers’ International Institute of Diamond Grading & Research (IIDGR) is offering a lab grown detection course.

Rio Tinto reported that supply from Argyle declined during the first quarter of 2017. Production of 3 million carats fell 11% year-over-year, and 16% from the preceding quarter. The decline is due to a slowdown in extraction and lower grades. At Diavik, carats recovered totaled 1.14 million, in line with Q1 2016. 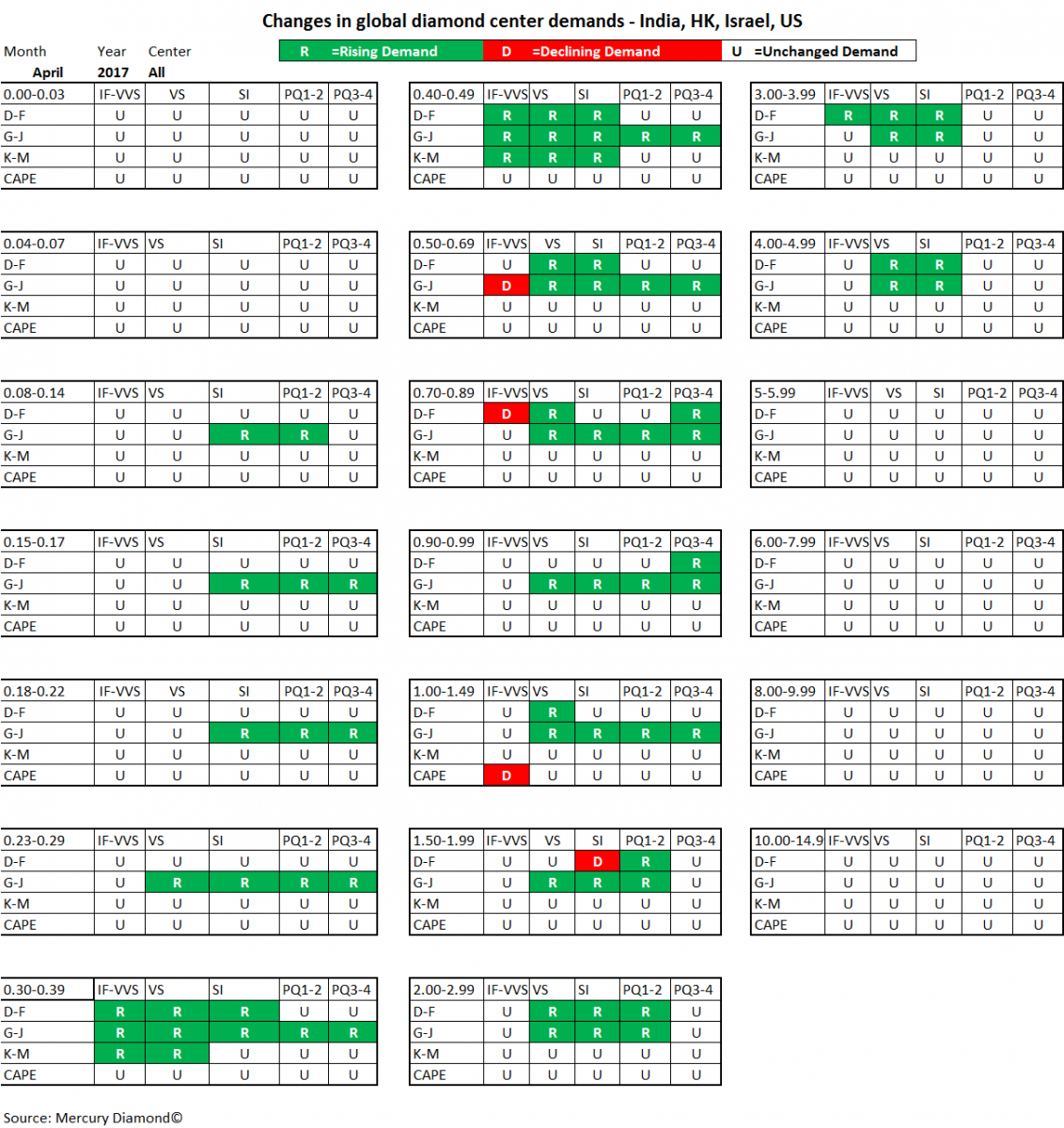