Although some specific items have had a better fate than others, and at some point many polished diamonds posted some sort of price increase, when averaged, the last time the index showed an upward year-over-year movement was during November 2014. Since that time, the index declined by more than 12% (11.9% until July and some more during August). When we published these figures, we said that the ongoing price decline underscores the continued softness of the polished diamond market. I continue to stand behind that statement. Other diamond indexes show the same trend. The IDEX index of polished diamonds, for example, is down 10.6% since September 2014.

Over the past couple of years, we warned that the volume of polished diamond sales is declining. Consumers have a waning appetite for diamond jewelry, and demand is weakening. The result of the decline in consumer demand was a rise in inventory levels – mainly among manufacturers, and, to a lesser degree, wholesalers. The rise in polished diamond inventory levels since January 2016 is clear, obvious and across the board, with one exception – 0.90 carats, which fluctuated during the 19-month period until July 2017. The inventory levels are based on Mercury Diamond’s™ continued tracking of the market, and in this case of triple excellent, none fluorescent.

When looking at overall inventories, a metric that may better reflect the overall rise in the value of goods held in the diamond industry, it is clear how alarming the situation really is.

As the above graph shows, the overall inventory levels have more than doubled since January 2016. This is nothing short than insane. Consider what the rise in value of this inventory represents, and how it weighs down on manufacturers’ bottom line. Think of the financial obligations to the bank: a manufacturer has a typical turnaround time for the manufactured goods, from the time rough is purchased with the help of financing from the bank, to the time money from the sale of the polished diamonds is received, and the financing is paid back to the bank. As this turnaround gets extended, the debts mount.

Now consider this in light of declining polished diamond prices. As sales slowdown, the value of the goods slowly but steadily erodes. Manufacturers’ ability to recoup the expected loss in revenue is nil, and the thin margins become even thinner. Now let us add another component to this equation – rough diamonds. Rough diamonds are on the rise in two ways: quantity and cost. As we increase the cost of rough diamonds and buy more of them, our outlay increases. At the same time, the volume of sales is decreasing, the archived price for the sold polished diamonds is sinking, and margins are shrinking. This, I’m afraid, is dangerous to the very wellbeing of the diamond industry.

This trend has not escaped the watchful eye of the banks. They are taking notice and are acting accordingly - by pulling back. This is not always at a large scale - often it is done in small and not obvious ways - but traders, manufacturers and others in the industry will tell you that financing is not easy. The leading financing banks are decreasing their financing to the industry in a variety of ways, including offering less credit, changes to financing costs, raising demands from companies, being more stringent in their requirements, and generally being less flexible with borrowers. Recently, financing in Dubai declined after a number of international banks lost money to the diamond industry. A few local financial institutions stepped in, but cautiously.

With all of this, the latest insolvency reported in India is no surprise. I’m afraid it is only the first in a wave of business failures that will follow. This is only to be expected in such a business environment, where manufacturing continues at the same pace despite a rise in costs, a decline in sales and shrinking prices. In any other industry, manufacturing would decline and come to a near standstill until inventories were sold off. The continued manufacturing in the diamond industry, which results in piling inventories, is practically insane. We are killing ourselves!

So what happened in the market in August? Demand from wholesalers and retailers was limited, with a few small changes on the edges of the market.

The two big news items were the improved Tiffany results, and the acquisition of James Allen’s parent company, R2Net, by Signet. Tiffany’s second quarter sales were up 3% to $959.7 million, despite a 2% decline in same store sales. On a constant-exchange-rate basis that excludes the effect of translating foreign currency sales into US dollars, global sales rose 4%, and same store sales declined 1%. Of more importance to the company, net earnings rose 9% to $115 million.

Signet’s purchase of R2Net is an interesting one. When Signet reported the decline in sales during the 2016 holiday season, Mark Light, CEO at the time, said: “Signet’s disappointing holiday results were driven principally by underperformance in its Sterling division e-commerce business”. In that regard, JamesAllen.com, the second largest online diamond retailer in the US, has the potential to transform Signet’s online presence.

The $328 million cash purchase includes a number of technologies and other operations in addition to the e-tailer. Chief among them is Segoma Imaging Technologies, which has a high resolution diamond photography and imaging technology that powers the site, and helps diamond traders buy diamonds without examining them directly.

Otherwise, traders reported slow activity with retailers. Some of this has to do with most traders being on vacation, while many store owners being busy with tourist-driven traffic. However, some are noting a slow selling period, and a loss of confidence in the diamond business. Medium size specialty jewelry retailers are saying they are slowly moving away from selling diamonds, focusing on other product drivers. Some are complaining about their margins, stating that it is not worthwhile to stock anything, and preferring to rely mainly on memo. This is not a realistic expectation, considering the state of the midstream, and the need to generate sales while decreasing the risk returns. Some specialty jewelry retailers are liquidating their diamond stock, preferring to focus on watches and low-cost, high-visibility brands such as Pandora.

Indian traders are reporting a slow market, with activity mainly in very high-end goods – D color, IF clarity. This is focused on 0.30 and 0.90 rounds. Most of the rest of the items are in slow yet steady demand. Conversely, the Indian market is reporting a drop in demand for many other top color and clarity items. This is clearly a market in disarray.

The market is suffering from an oversupply of goods, high inventories, and strong pressure to lower prices, as clients smell the need to generate sales, and are unwilling to pay the prices manufacturers and wholesalers are demanding.

Chow Tai Fook launched their T Mark collection, an attempt at branding diamonds. The T Mark diamonds are embossed with a logo and serial number in a similar way to the Forevermark diamonds. One of the selling points is consumers’ ability to trace their T Mark diamond from its mining origins to the finished jewelry.

The Hong Kong market slowed down in August, despite the rise in tourist traffic, because traders are waiting for the September trade fair. Demand in Hong Kong was unchanged during August, as was business in Mainland China.

After a very slow period, the Israeli market is back from the summer vacation and looking forward to upcoming sales events: the early orders for the November-December holiday season, and the September Hong Kong show. The market is suffering from an oversupply of goods in general, but there are shortages of the most sought after goods. Manufacturers are reporting high inventories that are not moving, but are worried about the impact of lowering prices to get the goods out of the door.

Items in demand in the Israeli market are low-cost one carat white rounds, half carat rounds that sell in the range of $700-$1,000 per carat, and nice looking SI goods weighing one carat. The market is also providing a lot of opportunities because of the low demand, such as 0.70-0.79 carats rounds, cleanish white half carats, and even fancy yellows.

There is steady demand for high quality Chinese manufactured diamonds. Indian goods are not doing as well in the market. Traders explain the difference in the quality of the polishing.

There is low demand for fancy-shaped goods. There are few hearts in the market, a shortage in ovals, and demand from the US for cushions.

In fancy color, demands are limited and selective, while a shortage in fancy light yellow continues. Overall, demand for yellows is down, and prices are declining. 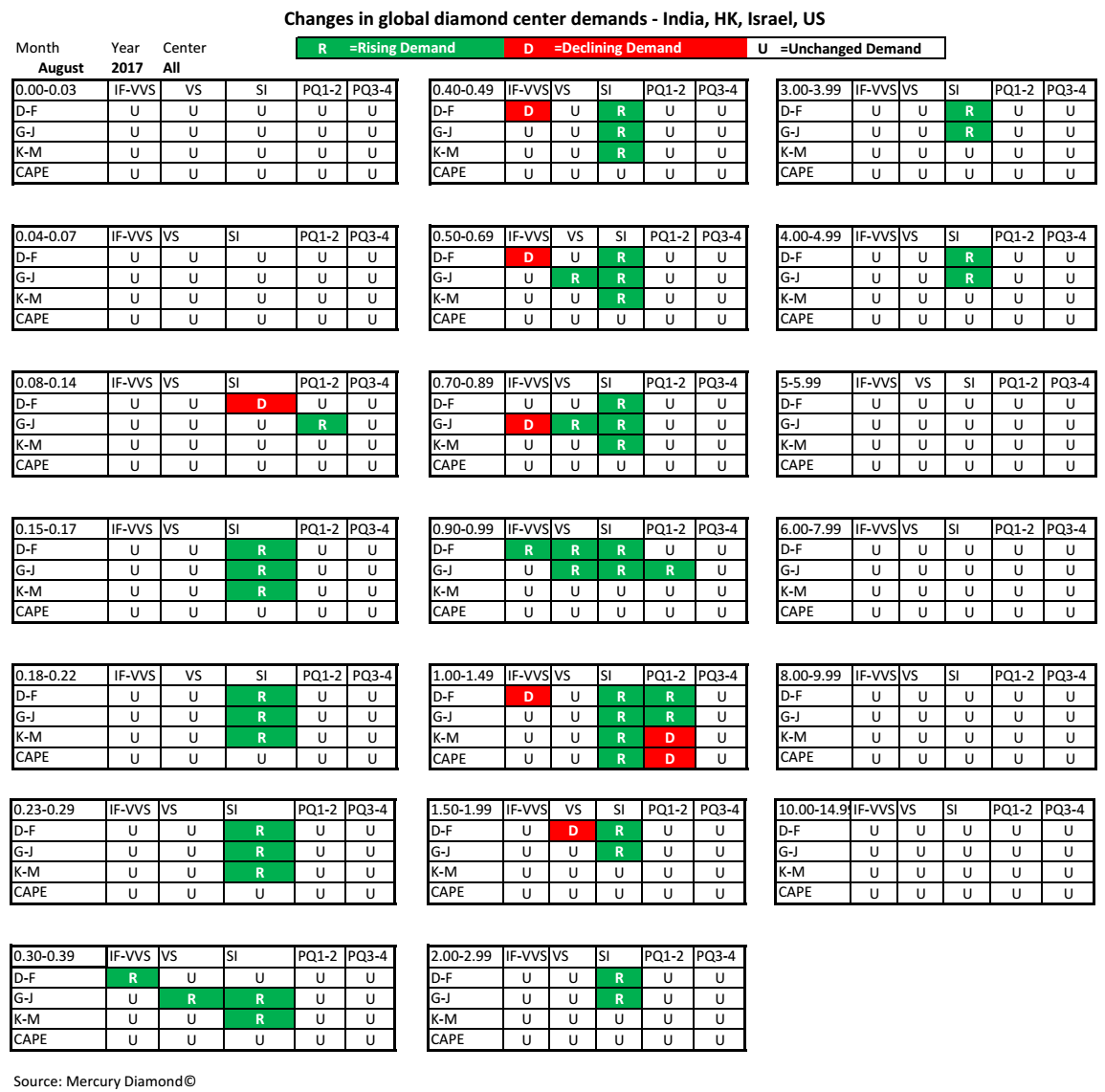 Beneficiation in the Diamond Industry
Support Services: Sorting and Sales