August is generally a period of slow activity in the diamond industry. Traders, manufacturers and wholesalers in Belgium, Israel and the US were away on their summer holidays as were many industry members that are based in India. The exception to this is US retailers, as those operating in popular tourist destinations saw a rise in in-store consumer traffic, which then spurred limited trading activity, mostly among American and Indian suppliers.

While most of the world is on holiday during the month of August, US jewelry businesses were busy, either attending to the rise in summer tourist activity or starting preparations for the year-end holiday season. The Majors, the large jewelry retailers, were already ankle deep preparing for the holiday season. The few remaining US-based jewelry manufacturers were busy with a range of designs hoping to correctly predict this year’s November-December holiday trends.

Another driver of activity in the American diamond market is wedding season which is currently reaching its end. Last minute orders, changes, and repairs kept many independent jewelry retailers busy as they fulfilled special requests.

Demand did pick up for a wide range of goods, from as small as melee, and all the way to 4-carats. The sweet spot was 1-3 carats rounds, which correlated with the bridal trend which drove much of the demand in recent weeks.

Among fancy-shaped goods, demand remained focused on top makes, while poor makes were practically in no demand at all. This is a classic sign of a consumer market with lower prices.

Many members of the diamond industry in India took some time off during the month of August for a summer vacation, although officially there was no break in trade, as can be seen by this local trade show, IIJS. The trade fair was a large one, though fairly local, serving buyers from all over the vast sub-continent. According to traders, gold jewelry sales at IIJS were good, but diamond sales were weak.

Some of the results of the trade show were a reflection of local demand. Gold always does well, and is doing especially well now because of the decline in the price of gold. Yet some of the demand was seasonal. Impacted by the summer slowdown, Indian traders confirmed that business was down, however, this decline was a little larger than usual, with traders reporting that this August was a buyers’ market, especially for smaller goods (1-carat and below) and for GIA certified goods. Prices of non-certified larger goods remained steady.

Some of the issues impacting the Indian market included a reported decline in bank financing, which in turn lead to lesser liquidity. Coupled with the seasonal downturn, traders were reluctantly bowing to price reduction pressure.

In line with the rest of the diamond hubs, the Hong Kong market was very slow during August. In addition, traders were worried about their main market, China, and were therefore worried by what they dubbed an “atmosphere that is not good.”

Hong Kong, like the diamond center in New York City, is more than a trading center. It is also an entry gate to a major consumer market. As such, beyond the usual summertime trade slowdown, it is impacted by consumer demand in China. Usually this would mean that during August, a period of heavy tourism, consumer demand is on the rise. However, with an ensuing trade war between the US and China, demand for diamond jewelry has been strongly impacted. Many of China’s consumers were concerned that the trade war would impact prices of consumer goods and prefered to act with caution regarding their expenditures. This impacts purchases in Hong Kong by tourists from Mainland China as well as demand inside China.

Another side effect of the trade wars is the strong US dollar against many currencies, including the Chinese renminbi. With diamonds trading in US dollars, prices in renminbi are rising, further reducing consumer demand.

As always in August, there was a drop in activity at the Israel Diamond Exchange (IDE) as traders were away on their summer vacations. Naturally, demand was lower compared to the preceding months. Israeli traders were reporting difficulty in finding sourcing polished diamonds.

Many items were still in low availability, which kept prices stable. Some low availability items have exhibited increases when orders came in. Among the items in good demand were size ranges known as over-size, such as 1.25-carat, 1.75-carat, and 2.5-carat goods. There was solid demand for these items and their prices were rising, while majority prices of the rest of the goods were stable.

There was an accumulation of less than perfect goods in the market, left-over items that suffer from poor makes, less than desirable proportions or symmetries, or high florescence. These items were sold at deep discounts. There were some changes in small, round-shaped goods. Sieve size -2 were seeing a decline in price after a period of good demand. There was also a decline in price for +2 - -6.5, as well as +6.5. Steady prices for +11, continued good demand for 0.30-0.39-carats 0.50-0.89-carats were steady, and 0.80-carats were doing very well.

Among fancy shapes, there was solid demand for oval, emerald, and pear shapes in good makes. As with the rounds, poor makes lead to deep discounts. Marquees and princess shapes weres seeing an increase in demand. 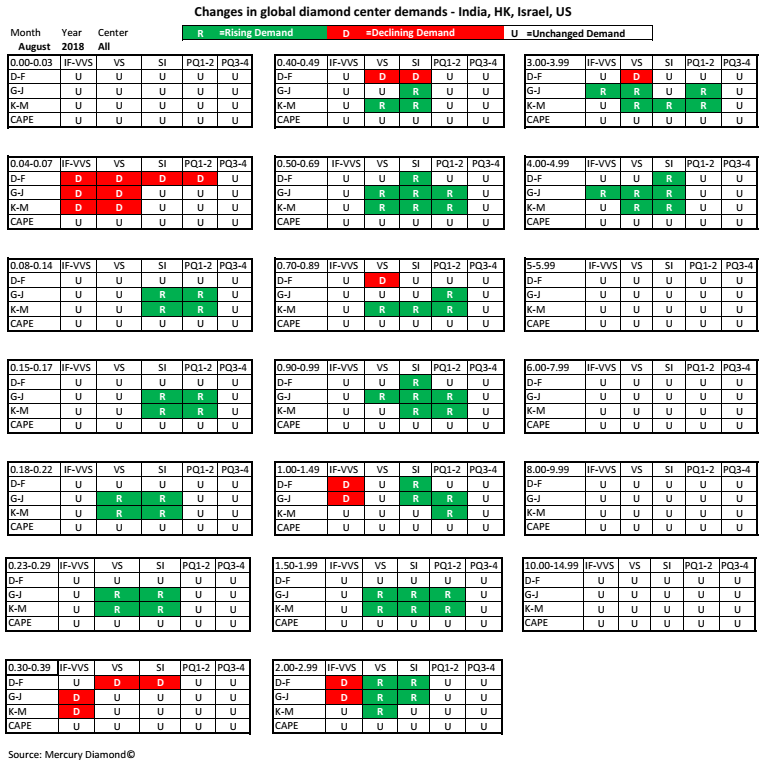 Banks Keep Walking Away and We Must Learn the Less...
Mercury Polished Diamond Prices: Prices Soften in ...