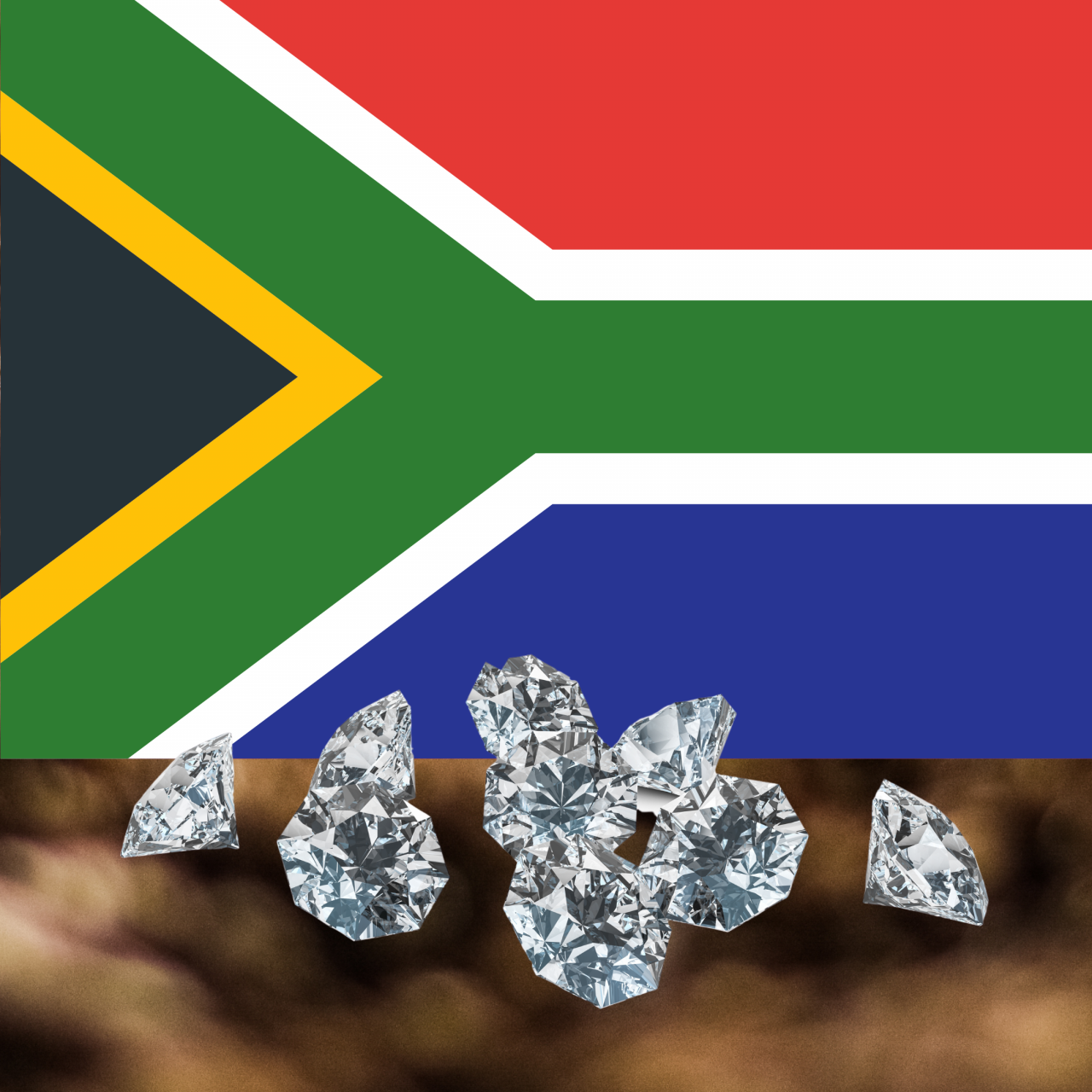 South Africa has a very long and important role in the history of diamonds. It was there, in the 1860s, that diamonds were discovered on the banks of the Orange River. The resulting diamond rush, and the establishment of De Beers' foothold on diamond mining, transformed the industry, helping to develop diamonds as a viable commercial product for more than just the world's elite. At one point in time, almost all of the world's diamond mining activity took place in South Africa. While the nation is still an important producer of diamonds, its role has diminished. Today South Africa is the world's fourth largest diamond producer by value, according to Kimberley Process statistics.

South Africa has seen its annual rough diamond production decline from a recent peak of $15.2 billion in 2007, to $8.3 billion in 2016. Many long-producing mines have closed, and De Beers has sold some of its smaller active mines to other companies. While the local diamond mining industry has declined, it continues to play an important role globally. The same cannot be said of the once-thriving manufacturing industry in the country. The number of South African diamond cutters has declined from nearly 5,000 20 years ago, to just a few hundred today. This does not include the loss of support staff and administrative workers who serviced these manufacturing businesses.

The reasons for the industry's decline in South Africa are numerous and complex. The State Diamond Trader (SDT) is a government-owned company that has the option to purchase up to 10 percent of the run-of-mine diamond production by value from local producers. The goal of its establishment was to provide a guaranteed source of rough diamonds to local cutters. It was hoped that new companies would enter the manufacturing market knowing that there was secure and ongoing source of raw materials.

However, the legislation aimed at supporting the SDT may actually have hurt it instead. The rules stipulate that SDT must purchase run-of-mine production, meaning they receive all ranges of qualities, colors, and sizes. This is contrary to how most diamond polishing companies operate, where they tend to specialize in a narrow range of rough manufacturing to develop niche skills in a certain area. By purchasing the full range of rough diamonds, only some can be cut profitably. The rest are cut at a loss.

Like other manufacturing centers, South Africa can profitably manufacture the larger, higher-value diamonds, but not the low-value, small stones that have mostly shifted to lower-wage countries. The entrance of new cutting centers in Asia, such as Vietnam, Thailand, and Laos have further eroded the ability of South African workers to compete on cost. Also, the technological development in South Africa has been slow compared to established manufacturing regions like India and China. Workers' wages in South Africa have been increasing rapidly over the past decade, nearly tripling since 2006. Today it costs more than $150 per carat to cut diamonds in South Africa. This is one of the most expensive areas in the world, only lagging behind Israel, Belgium, and the USA, which tend to specialize in large, high value stones.

In South Africa, rough diamonds can only be sold to individuals and companies that hold a local license to buy. The government restricts access to the licenses based on qualifications and black ownership, and the process to obtain a license is rigorous. However, in many cases, local license holders prefer to act as brokers, bringing foreign buyers with them to purchase rough diamonds using their license. These goods are ultimately exported, which defeats the purpose of the licensing system.

South Africa's government initiatives have also had an unforeseen consequence for the diamond industry. The government has become highly regulated, and there are countless rules and bureaucracy that foreign companies must navigate. As a result, many companies have simply left, and taken their foreign investment dollars with them. British bank Barclay's completed a deal to dispose of its African operations in Johannesburg, and has left Africa completely. Many De Beers Sightholders have also left the country, although this is also in part due to the declining availability of rough diamonds. According to De Beers' website, only seven Sightholders currently maintain manufacturing operations in South Africa, down from more than 20 a decade ago.

However, the realities of the industry have not been lost on the government of South Africa, and initiatives are currently underway to try to change direction. De Beers announced a new project aimed at revitalizing the manufacturing industry in South Africa. Under the pilot project, five black-owned businesses will receive a regular supply of rough, as well as a comprehensive training and support program. At the conclusion of the program, each company will be eligible to apply for the De Beers Accredited Buyer status, and if successful, full Sightholder status. Another historical barrier to entry has been access to financing. The current project aims to change this with involvement from funding agencies including Anglo American Zimele, and other De Beers Sightholders.

The future for diamond cutting in South Africa remains foggy, but one thing is clear: the local diamond industry must develop some form of competitive advantage over other cutting centers, or risk slipping into obsolescence. Access to rough diamonds is a huge advantage, but without skills development and investment in new technologies, the industry will continue to decline.

Tweet
Beneficiation in the Diamond Industry: Russia
Why are Rough and Polished Prices Disconnected?