In our journey through fancy colored diamonds, we have focused on some of the rarest colors found in diamonds. But not every fancy color shade is exceptionally rare. Some are plentiful and have achieved their celebrated status more as a result of clever branding and marketing., The most common are fancy brown diamonds and a few of the promotional spin-offs that have developed from these brown diamonds.

Brown diamonds were once considered virtually worthless and only useful in industrial applications. But in many mines, brown diamonds are much more plentiful than white diamonds, meaning miners historically faced the challenge of having a large proportion of their mine production that had to be sold at very low prices. This was especially true of the Argyle mine in Australia whose production is nearly 80% brown diamonds.

Rio Tinto, Argyle’s operator, realized that they needed a new approach, a way to alter the consumer’s perception of these diamonds. They eventually coined the term “champagne” diamonds to give brown diamonds an air of luxury, elegance, and affluence. Although the acceptance was slow at first, the marketing took hold and sales of these gems began to slowly but steadily increase.

“Champagne diamonds” is a marketing term, not a specifically-recognized color range. Diamond grading laboratories describe them as fancy light yellow brown, fancy yellowish brown, or another similar description that indicates the hue and intensity. To promote “champagne” diamonds, and in recognition of the need to describe the color depth of the diamond, Rio Tinto developed its own color scale. The scale describes these diamonds on a scale ranging from C1 to C7, from lightest to darkest intensity.

C7 is its own unique classification, used to describe fancy orange brown or fancy orangey-brown diamonds, and given the branding description “cognac,” due to its resemblance to the color of the luxury alcoholic beverage.

Through strong branding, brown diamonds are offered to the consumer market as an alternative to white diamonds, and are typically available at a strong discount compared to the price of their colorless peers. They are considered by some to be a more versatile color that easily transitions from day to night, and can be combined with other colored gems and diamonds to create very interesting designs. Aside from “champagne” and “cognac,” pure fancy deep brown diamonds might also be called “chocolate,” and “brandy” might be used to describe a reddish brown diamond.

Type IIa brown diamonds are the most common type of brown diamonds that are submitted for heat treatment, as they tend to respond the most and see the largest degree of color change. Grading laboratories use specialized equipment and expertise to identify treated diamonds, which are generally easy to recognize. These diamonds tend to lose a significant amount of value as a result of the treatment, but a white treated diamond may still be worth more than an untreated brown.

A few prominent celebrities who have embraced these gems on the red carpet have helped endorse champagne diamonds in recent years. At the 2004 Academy Awards, E! reporter Maria Menounos wore a gown stitched with 2,000 individual champagne diamonds totaling more than 3,000 carats. The stunning dress was valued at more than $2.4 million and certainly turned heads. 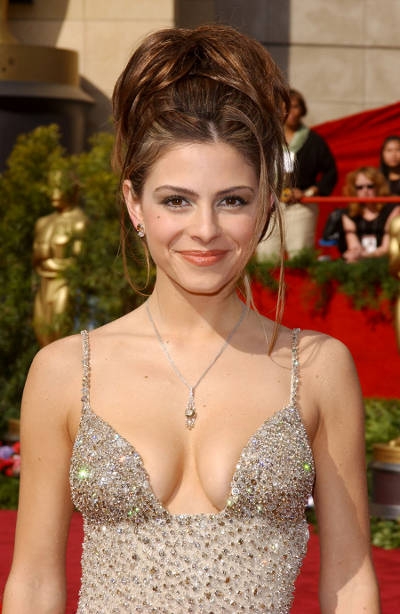 Most people are surprised to learn that the largest faceted diamond in the world, the Golden Jubilee, is a champagne diamond. The 545.67-carat fancy yellow brown diamond was cut from a 755 carat piece of rough and made in a way to maximize its size, and claim the coveted position as the largest polished diamond on the planet at present. Before it was gifted to the King of Thailand in 1997, it was known as “the unnamed brown.” 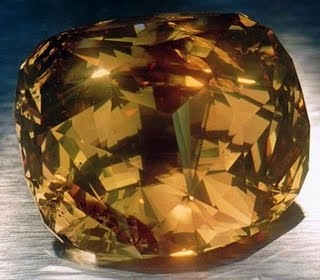 The Star of the South was one of the first Brazilian-mined diamonds to achieve international acclaim. An African slave woman discovered the original rough diamond in 1853. For her efforts, she was given her freedom, and a pension for life. It remained the largest diamond ever recovered by a woman until 1967, when Ms. Ernestine Ramaboa discovered the Lesotho Brown diamond. The cushion-shaped gem, weighing 128.48 carats, has a color grade of fancy light pinkish-brown. 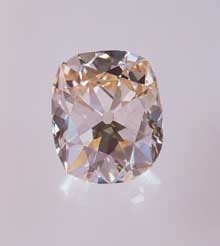 The Golden Pelican is a 69.93-carat fancy champagne-colored, emerald-cut diamond set in a gold ring. The diamond was mined in South Africa, and was named after the famed street in the heart of Antwerp’s Diamond district, Pelinkaanstraat. The diamond was once owned by Baron Corso De Palenzuela von Habsburg, and was reportedly used in a banking transaction to secure the freedom of Jews that fled persecution in Cuba.

Although brown diamonds don’t have the aura that white diamonds have because they are more common, they continue to gain in popularity. Fancy brown diamonds offer consumers a very attractive diamond at a much lower price than traditional white or fancy color diamonds, and can be used with much versatility in jewelry design.