Recent changes in demand for polished round shaped diamonds in key sizes highlight some interesting trends, anomalies and problems in the wholesale sector of the diamond market. A look over the past year reveals that ahead of the holidays, there is not only increased demand, as expected, but shifts in taste as well.

Overall, changes in demand seem obvious: after stocking up on goods in September and October at a steady rate, demand declines in November as retailers are focused on generating sales, with most of the polished diamonds that they need already on hand. In December, however, as consumer demand reaches its annual peak, and retailers’ inventory depletes, these retailers are drawing additional polished diamonds from wholesalers in the international diamond centers to satisfy consumer purchases – actual as well as expected based on store activity.

Naturally, after the November-December holiday rush, in January, consumer demand diminishes, and with it demand from retailers to the wholesale sector. Not surprisingly, demand returns in February as Valentine’s Day approaches. As the following graph shows, overall demand in the wholesale market increased in March and April. This is partially due to the jewelry manufacturing cycle. After a relatively slow period, jewelry manufacturers are setting diamonds in jewelry for Mother’s Day. The US holiday is celebrated in May, and commonly leads to increased sales of chocolates and jewelry, although the type of diamond jewelry sold is usually lower-cost. 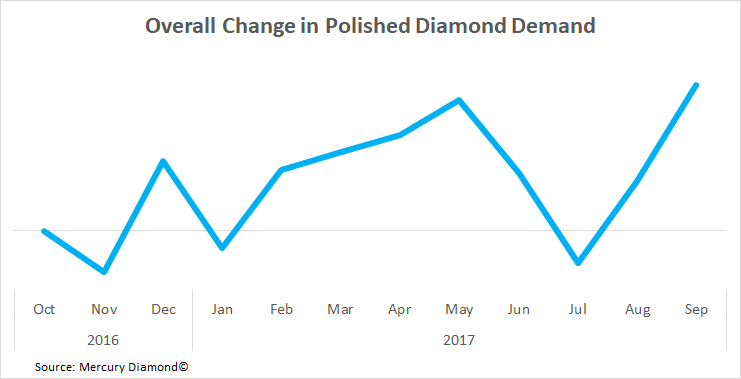 The slow summer time leads to another decline during June and July. In August, however, tourism leads to a rise in diamond jewelry sales, mainly in large global cities such as New York, Paris, and London, as well as other popular tourist destinations such as cruise ships. This past September, as jewelry manufacturers start working on their November-December holiday offerings, demand for polished diamonds from wholesalers increased. Two more reasons for the rise in wholesale demand during September are the Hong Kong trade fair, held annually during September, and the Chinese National Day, which drives consumer demand, as many in the region go on a week-long vacation.

One Carats Mellow – At Times

Compared to the overall trend, one carat (1.00-1.49 carats) round polished diamond performance was subdued. However, this was not always the case in the past year. During October-November of 2016, and again in July of this year, one-carat rounds bucked the demand trend and outperformed most other sizes. However, these seem to be the exception rather than the norm. 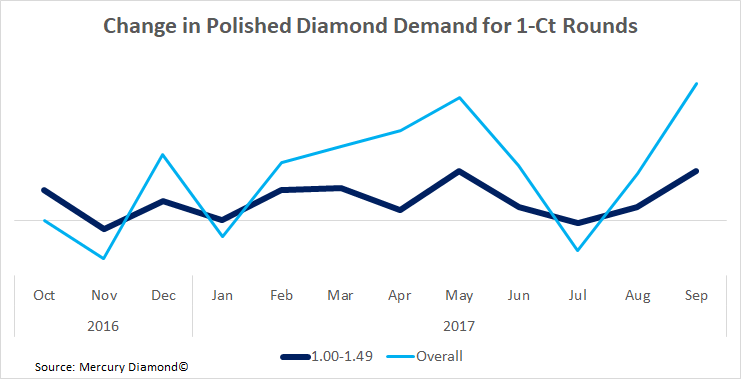 As the graph above shows, throughout most of the past year, demand for one-carat rounds was below average. On one hand, this makes sense – this is a staple of consumer demand, and a stable demand behavior compared to other sizes is expected. The rises in demand seem to reinforce this view, taking place during December, February, and May – the main diamond gifting periods. On the other hand, as a staple of consumer demand, one would expect that when demand rises, the increase would be strong.

A size range that did perform well throughout the year was the 0.30-0.39 carat round polished diamond. After a drop in demand in October of last year, and an additional lag behind during November, this size range displayed steady growth straight through the last year. 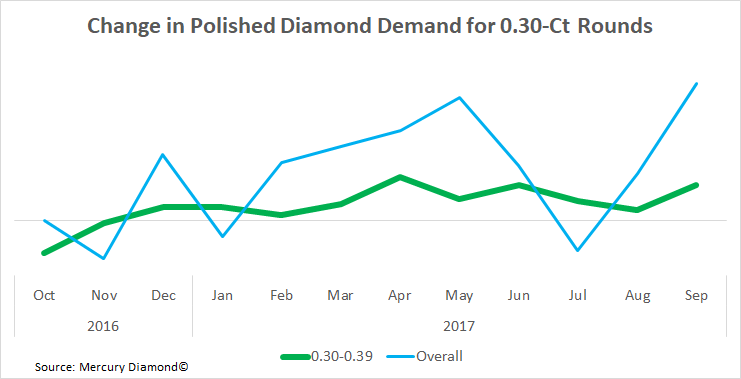 Thirds, as this size range is commonly referred to, are very popular around the world and are rising in popularity in the US, especially among 20-30 year-olds seeking lower-cost and less flashy diamond jewelry.

Half-carat rounds suffered from near-passive demand during the past year. With two main exceptions, in December 2016 and during the past month, demand for half carat (0.50-0.69 carats) rounds has hardly changed from month to month, suffering from drops in demand several times during the year. Like all other size categories, the rise during September is a positive sign of a possible change in consumer interests. 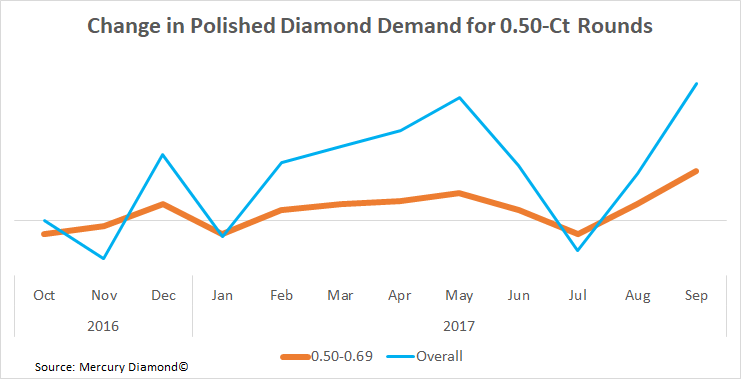 Round-shaped diamonds weighing two carats are considered a popular item among diamond traders. From a consumer perspective, however, they represent a jump in expense, and are therefore out of reach for many diamond consumers. Even if a two-carat diamond is not out of reach, it is expensive enough that even those who can afford it often prefer to buy smaller diamonds, and keep the difference in cost in their pockets. As the demand graph below indicates, this size lost some of its popularity in the past year, and retailers are ordering a lot less of it.

This is true not only in absolute numbers, but also relatively. Even if there is a rise in demand, it lags far behind the rise in demand for other items. Furthermore, this is the only size range in this comparison that had hardly any increase in demand during September, while all other items performed very well. 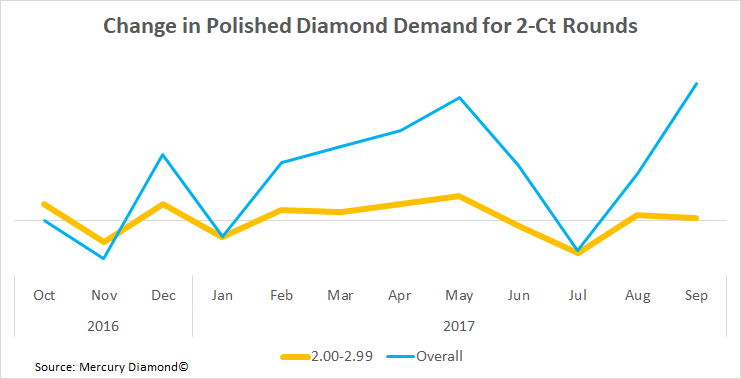 There are several important trends in demand for polished diamonds during the past year. Diamonds weighing a third of a carat are rising in demand, and two carat diamonds are losing market share as the US market is shifting from bigger, pricier diamonds to smaller and lower-cost diamonds. If the diamond industry wants to battle these trends, it needs to tackle two issues: taste, and willingness to spend.

Looking at the trends together, such as in the graph below, may seem to indicate overall good demand that rises through the year. This is not the case, as demand increases in past years were stronger and more pronounced. The frequent decline in demands from the midstream is a worrying trend that needs to be addressed. 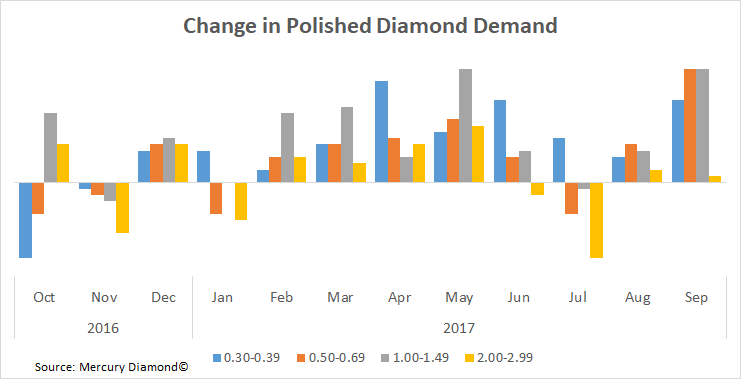 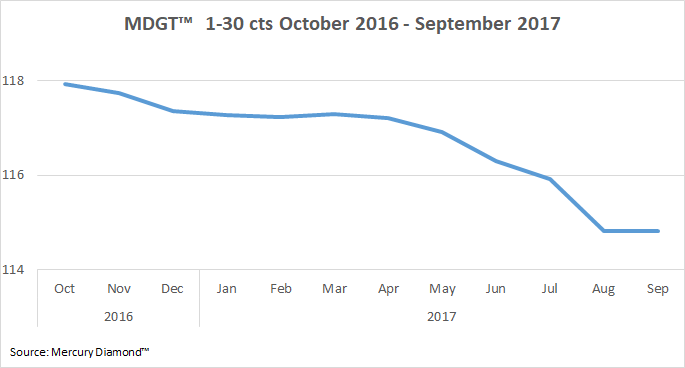 After a two year period of rising, the Mercury Diamond Global Tracker™ (MDGT) index has been declining continually since mid-2014, completing an estimated 19% overall drop in prices. Polished diamond prices are currently moderating, in a further sign of prices hitting rock bottom.

Beneficiation in the Diamond Industry: Other Count...
September 2017 Market Report