The diamond market finally improved towards the end of the year, thanks to the holiday season. Unfortunately, that only happened late in December. Traders reported good demand, and inventories have finally decreased meaningfully.

Both ALROSA and De Beers reduced supply of rough diamonds to the market in the final month of the year. Retailers provided mixed reports, although overall the holiday season went well. Signet stated that its third quarter sales decreased, while Pandora reported a 5% rise in same store sales. Richemont, Tiffany and other high-end jewelry retailers are expected to report good to strong sales in the fourth quarter.

The most important selling season came to an end and the impression is that the results from sales of diamonds and diamond jewelry are mixed. In the run up to the final days of the holiday season, diamond traders had relatively large inventories of goods in low demand. Among them, fancy shaped with poor makes and low qualities, as well as large rounds and fancy shaped diamonds in low qualities. Liquidity may also be an issue, with traders reporting that the need for cash is felt at all levels – from store owners to major dealers.

During the holiday season, independent jewelry retailers were seeking inventory on memo, something traders are making a major effort to steer away from. One item store owners were after in particular were 1-3 carat ovals in good makes. This type of merchandise is very difficult to find, making the desire to get them on memo unrealistic. Stores were also very interested in having 1-3 carat rounds on hand.

Overall, retailers that adapted to the changing market and either marketed, offered designs, or acted in any other way to attract consumers to their stores – did better. This was mostly true for specialty jewelers rather than the large, general stores. Chains seemed to be better at that, while small, independent stores seemed to have performed less well.

One such example is Tiffany. The high-end retailer opened a coffee shop in their Fifth Avenue building where their flagship store is located, offering breakfast at Tiffany’s, after the book by Truman Capote and the movie starring Audrey Hepburn. The idea proved very successful – interest in was so high that it was practically impossible to book a table. More importantly, it drove very impressive store traffic.

Signet continued to push its two-stone program, and although its commercials were very traditional and did not break the mold, it seems that their holiday business was better than in the previous year. Similarly, many retailers put an emphasis on brands, which are a growing force in diamond jewelry sales in the US.

Despite the efforts of specialty retailers, online and discount stores continued to erode their sales, especially in lower price-point items. Department stores, which have been suffering from declining mall traffic for some time now, probably did not do very well with fine jewelry sales this holiday season. Specifically, traders are pointing to Kohl’s and Macy's, despite the fact that they offered steep discounts. Although a common way of attracting buyers during the holiday, consumers of fine jewelry probably want more than a lower price, which is where specialty jewelers have an opportunity to excel.

In general, traders reported demand for one-carat rounds in good quality and makes from specialty jewelers. In addition, demand was noted for 3- and 4-carat rounds. Ovals with very good and excellent makes were a hot item, as were pear shapes. Emerald-shaped diamonds in large sizes and good quality were also in demand, although much less than ovals. Consumer interest in princess shaped diamonds, even in very good makes, continues to decline.

December was a period of decreased inventories. Should we say, inventories finally decreased. The Indian diamond center suffered from a high level of inventories throughout the year, and the combination of decreased rough purchases, the manufacturing shut down during Diwali vacation, and the movement of polished diamonds out of the hands of Indian diamond polishers and diamond traders to jewelry makers and retailers abroad have increased some of the pressure.

As always, those who held on to the polished diamonds as their prices declined – with the hopes of recouping their costs and expenses when prices recover – found that polished diamond prices only continued to decline and were further hurt. Conversely, those who sold despite the price decline fared better in the long run. The ongoing financial issues that have plagued the entire industry continued to hurt the Indian companies more than others, proving that relying on heavy financing hurt them during a down turn market, which the market has been for a number of years.

The last week of December was characterized by a typical seasonal decline and selective demand, ending months of good demand for polished goods. Demand for goods for the Swiss watch market, which had been dormant for a long time, has also revived lately. Despite the improved situation in recent months, traders still consider the market to be fragile.

There was a surge in demand for 0.030-0.39 and 0.40-0.49 carat goods and rising demand for goods weighing one to three carats. There was very good demand for very small goods, 5-8 points, and even for one point and smaller. On the other hand, traders reported a decline in demand for goods weighing half and 0.75 carats, as well as for 2-4 point goods. Shortages are reported for a variety of goods, mainly GH color and VS-SI clarities, something that had a slight positive impact on prices.

Square goods are still very weak. Demand for cushion and princess shape was very low. After a brief surge in demand for ovals, demand cooled, as availability increased.

Yellows are showing good demand and there are also reported price increases.

The diamond market in Hong Kong has also improved in line with the global market. Demand was driven largely by orders from China, which had improved quickly. Sales in Mainland China are much better than those in Hong Kong. Traders expect to see good results ahead of the Chinese New Year on February 16. 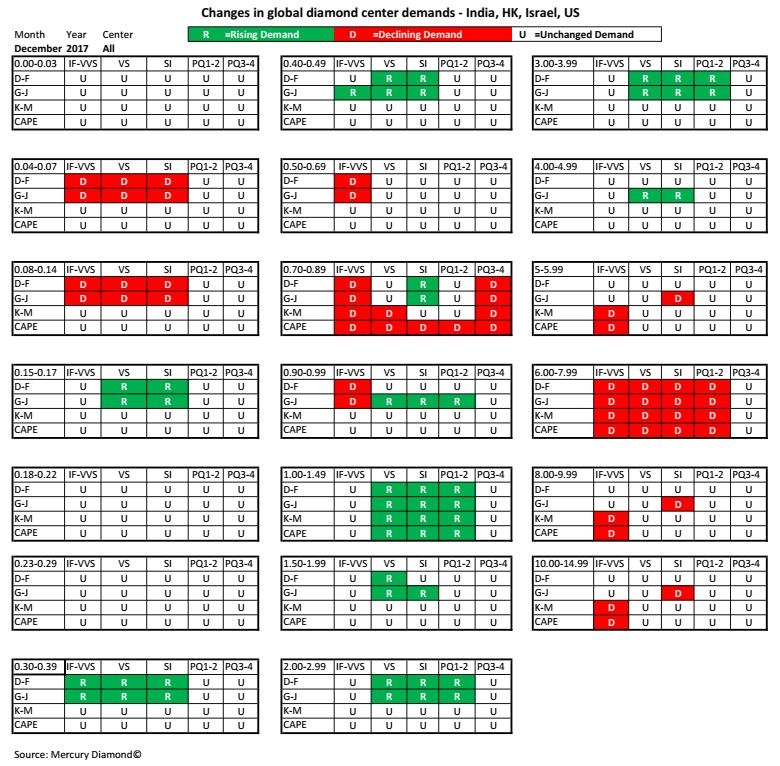 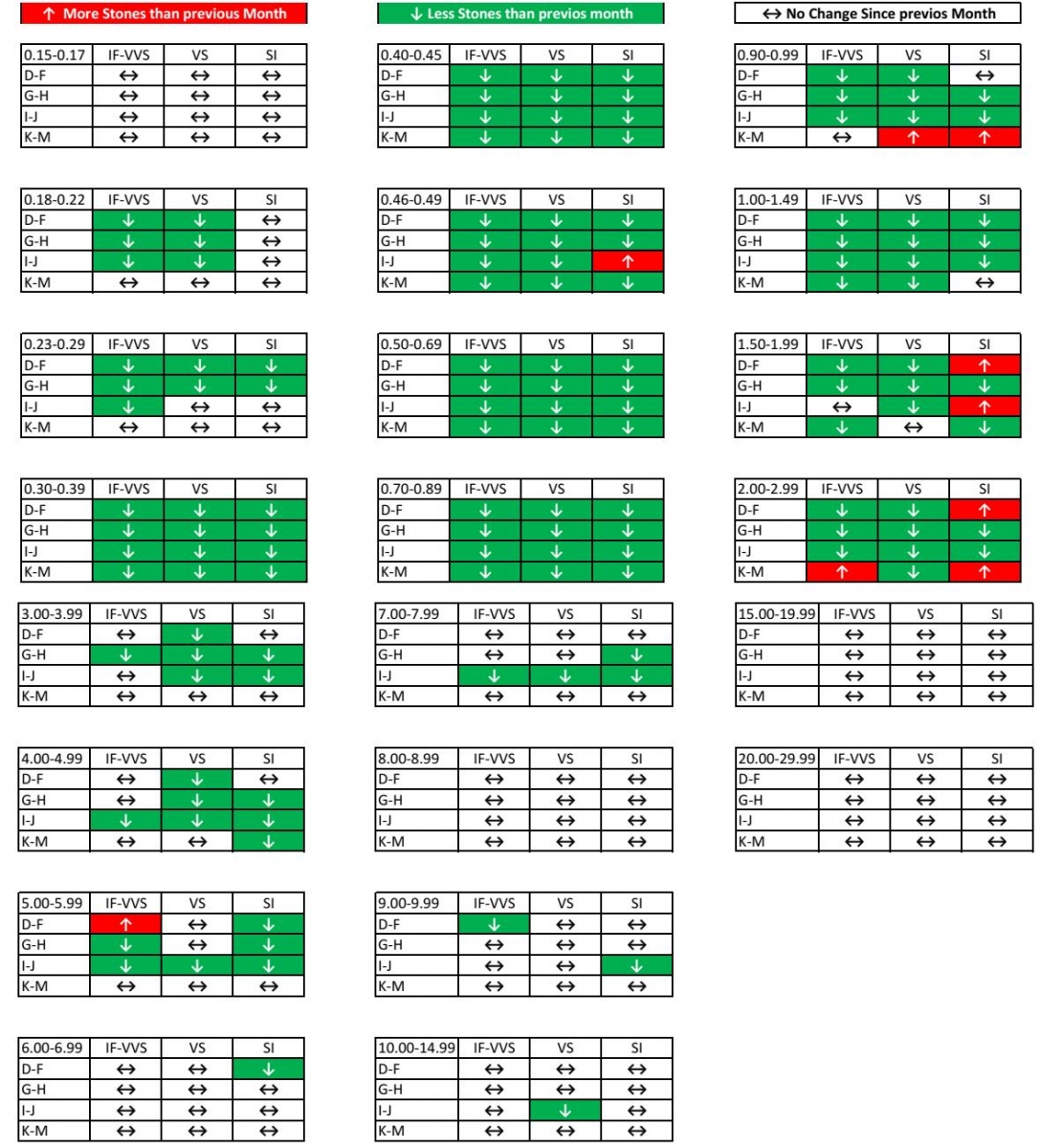