A sharp drop in demand and a rise in inventories characterized trade in December. Polished diamond traders around the globe were feeling blue after retail sales of diamond jewelry failed to meet expectations.

American polished diamond traders said that the holiday season ended disappointingly. According to initial reports, total US holiday sales for all goods rose by a mid-single digit, sales of jewelry improved a low single digit, and diamond-set jewelry posted a marginal improvement at best.

Diamond jewelry sales in December was mainly last minute and was better than expected for high-ticket items and jewelry set with larger diamonds. While that is good news, it is important to remember that the bulk of the diamond business, both in volume and in total value, is in smaller and less costly jewelry. These less expensive fine jewelry goods did not sell as well as hoped for, again, according to initial reports.

Retailers and traders pinned the poor performance on the dropping stock market, the unstable political environment, as well as concerns on the international level, such as the trade war with China. Add to this mix a lack of massive generic promotion activity, and the less-than-spectacular results are no surprise.

Mall-based stores were focused on fashion jewelry in particular, trying to keep price-points low, offering earrings and pendants. Yet from a trade perspective, those items are competitive, and the cash-flow they generate is not high.

One trend that seemed to emerge is a shift in size. US-based traders reported that demand for smaller round goods, such as thirds (0.30-0.39 carats) was not as hot as could be expected considering how well they sold in recent years. Instead, it seems that demand has shifted to somewhat larger diamonds, namely 0.50-0.99 carats. If that is the case, it is an important shift in demand.

New York polished diamond traders had a lot of goods on memo with retailers and are concerned about the disappointing results.

Diamond market sentiment in India was poor in December. Most diamond polishing factories were not working at full capacity, due to a buildup in inventory and lower than expected demand. Fresh polished diamond output, normally expected in late December or early January, was pushed to mid and late January.

Overall, demand was restricted to few areas, mainly large goods weighing 2 carats and more. Conversely, demand for cape color items dropped across the board. When clients did place orders, they were very specific, leading to continued shortages and prices being pushed up. Yet, traders still feel less confident, and they are not ready to stock up even on those goods.

The Hong Kong diamond market, in a departure from the rest of the world, was viewed as stable in December. Demand at stores came from tourists arriving from Mainland China as well as overseas.

The Hong Kong International Jewelry Manufacturers' Show, a small trade fair that ran from the end of November through December 2, was not successful, according to local traders. That said, expectations were low before it opened.

Demand in Hong Kong during December was relatively flat. For example, prices of 3-carat stones are stable, but demand was on the lower side. Round, 1-carat goods in D-G colors, SI clarity, graded as triple excellent were in short availability, leading dealers to hold the price. Fancy shaped goods were in stable demand.

Small goods, often sold in parcels, were very slow as local jewelers have those goods on hand.

The wholesale market in Israel experienced a slowdown in activity. While this is partially seasonal, it also reflected a decline in demand from the US. In the last two weeks of the month demand nearly ground to a halt. Salespeople who returned from the US reported 2-carat and larger goods in SI-I1 clarities sold well to retailers. We did not hear the same for smaller goods.

Traders reported local demand for rounds in H-N colors and VS-I1 clarities. These goods are in short supply, and although prices are stable, traders are not altogether firm on the price, and willing to close deals for the cash flow.

Due to demand for top makes, specifically items graded triple Excellent, or at least Very Good, large price gaps emerged. Items with top makes are in good demand, commanding higher prices, while goods that have small imperfections or florescence are in low demand, leading to sliding prices. The price difference would generally be a few percentage points. Today, however, traders are talking of a price difference of 10% or more.

This trend towards very selective demand is seen in a number of items: very small items, fancy-color yellows in SI clarities, fancy-shaped goods, goods in cape colors, with the large price difference seen between deep and light color goods, and large pricy items with very slight imperfections such as having medium blue florescence. 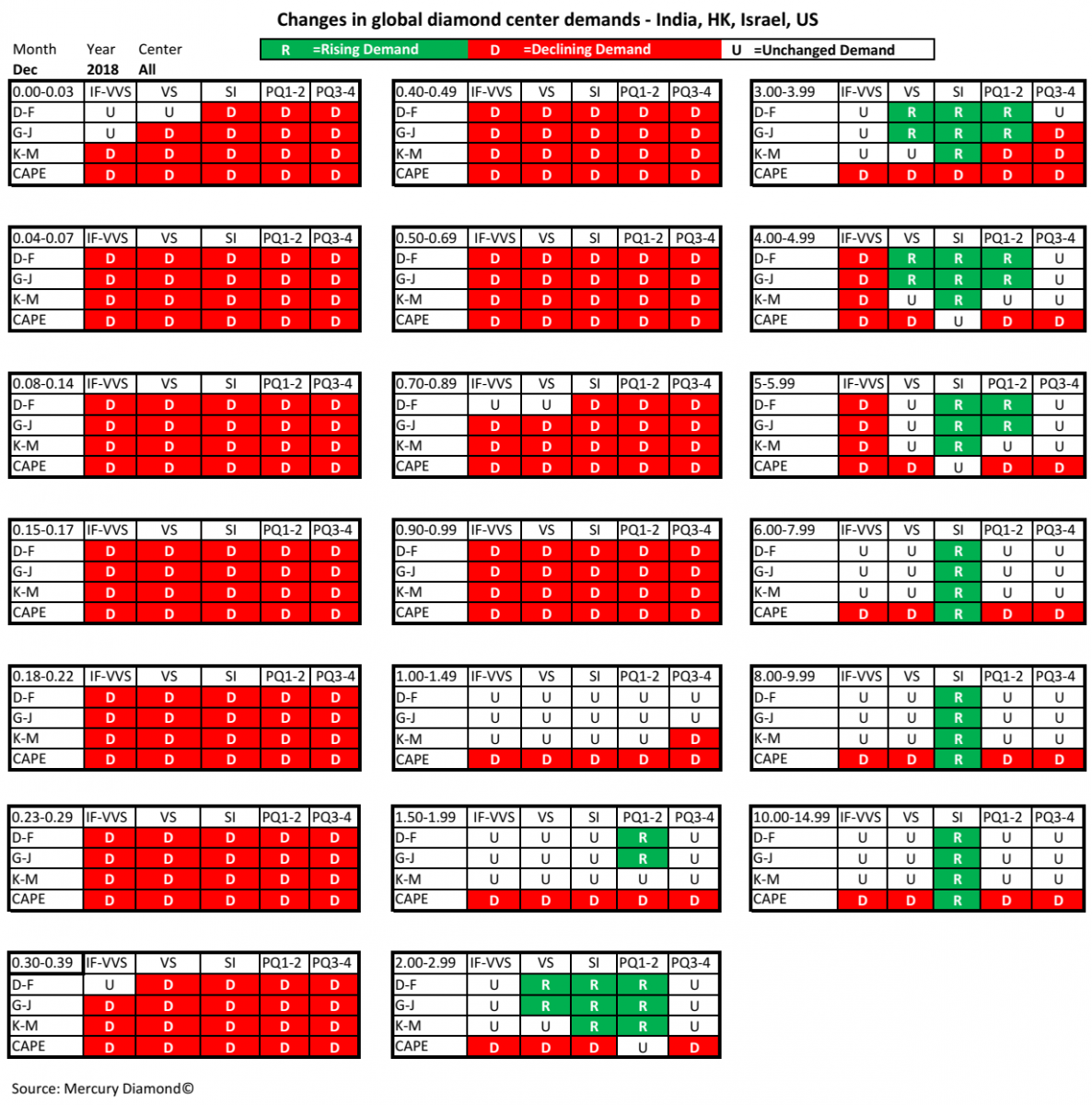