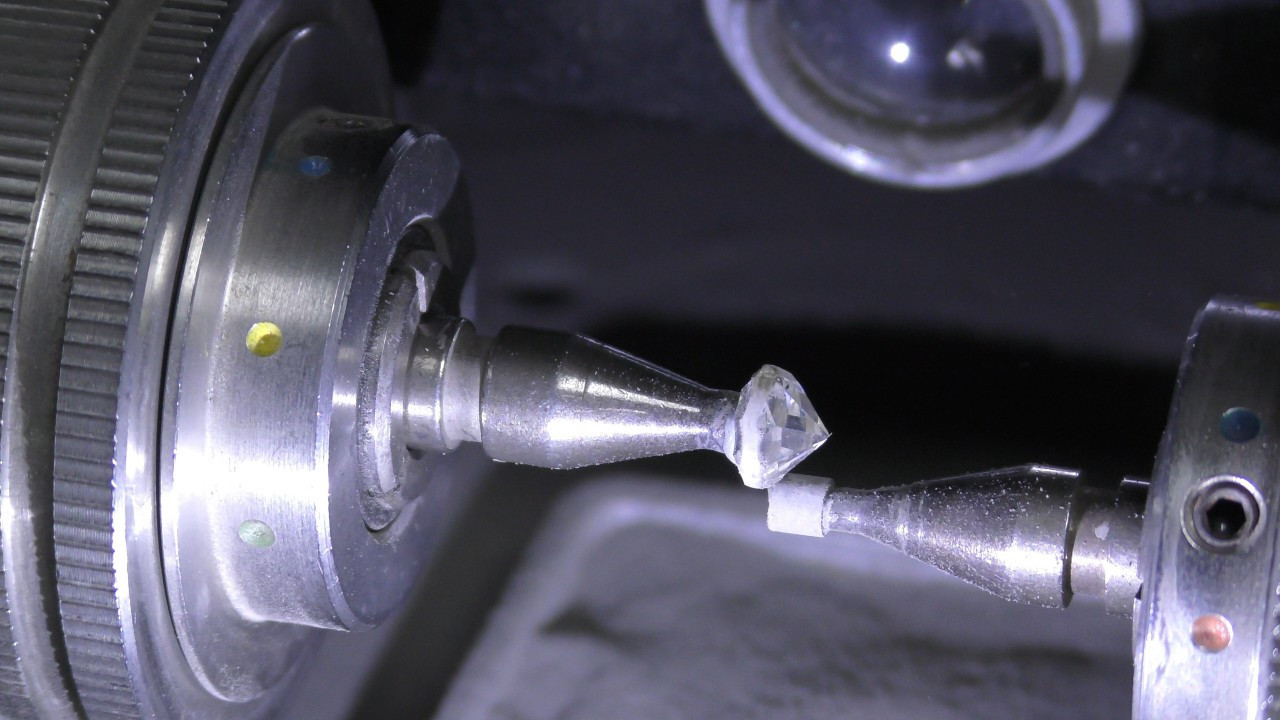 The earliest scaif consisted of a metal wheel that was rotated using a foot pedal. The wheel was coated in olive oil, and a fine diamond powder that was held in suspension by the oil. Van Bercken quickly figured out that applying more or less diamond powder at different radiuses of the wheel allowed him to achieve the ability to both grind the stone, and apply a smooth polish as needed.
Van Bercken was born in Bruges, Belgium, about 80 kilometers west of Antwerp, and studied diamond cutting in Paris. By the mid-1400s, Bruges had become an important early trading center for diamonds. It was at the end of the trading route running from Venice. As word of his invention spread across Europe, van Bercken became inundated with requests from European nobility to manufacture diamonds for them. He quickly found that neighboring Antwerp was a more suitable location, as Antwerp's inland water port made it easier to receive his visitors and goods. At the time, Antwerp's port processed 40 percent of the world's trade, making it the transportation hub of Europe. His presence there, and success in establishing a diamond polishing trade, is a primary reason that Antwerp developed into the center of the world's diamond business, and he is still celebrated in the city today.
As his reputation grew, he was given access to larger and larger quantities of rough diamonds, with the goal of experimenting and developing new cut varieties. He was the first to develop the concept of absolute symmetry in the placement of facets on a stone. He was meticulous in his work, and studied light refraction from the surface of a diamond, although he perhaps failed to fully understand the dynamic of light refraction from within the stone.
His work culminated in the invention of numerous new diamond cuts, including the pear shape. He was also the first to cut a diamond into a briolette, after observing other precious gems with a similar shape coming from India. His work led to the earliest predecessors of the modern round brilliant cut. While no one could doubt that his new diamond shapes were much more beautiful than anything else available, not everyone was happy with the outcome. Before the sophisticated laser saws and computer-aided planning software of today, his new cuts resulted in a much higher degree of diamond waste that reduced the size of the finished gem. His customers did not always warmly receive this.
Van Bercken was Jewish, and at the time, Jews were restricted from doing certain jobs and holding certain positions in the community. Diamond cutting had no such obstacles, and he began training and teaching other Jewish students to cut diamonds. He would later establish a sort of skilled workers guild for diamond cutters in Antwerp. It was also a dangerous time for any non-Christians, and van Bercken received protection from Jacques Coeur, who was made master of the mint in France by Charles VII. Coeur was an important and influential trader of his day, and helped introduce Van Bercken to much of the nobility that requested his diamond polishing services. Van Bercken is responsible for establishing the Jewish traditions in the diamond industry that continue to this today.
Van Bercken's best-known assignment was to cut three large stones commissioned by Charles the Bold, Duke of Burgundy in the 1470s. The most famous of these stones is the Florentine Diamond, a nine-sided, 126-facet double rose cut of 137.27 carats, which has a long and storied history. It is believed to have been in Charles' possession when he was killed at the battle of Nancy in 1477. The stone was stolen in 1918 and smuggled to South America, where it was likely re-cut. The second stone weighed 14 carats, and was given to the Duke by Pope Sixtus IV. Van Bercken faceted the stone and set it in a gold ring to be used by the Pope during sacred functions. The third stone was apparently misshapen, but van Bercken cleverly cut it into a triangular shape, and set it into the center of two clasped hands in a friendship ring for the Duke. Van Bercken is also believed to have cut other important stones, including the Sancy and Beau Sancy, which were named long after van Bercken's death in honor of Nicolas De Hardy, Lord of Sancy.
A statue of van Bercken still stands in the Antwerp port area, depicting him in his work attire holding a diamond. Another statue of him is found at the entrance to the 'Meir' shopping area in Antwerp, just a short walk from the city's diamond district. He remains one of history's few working-class men to receive such an honor. There is even a diamond jewelry retail brand in Australia that bears his name.
Tweet
×
Stay Informed