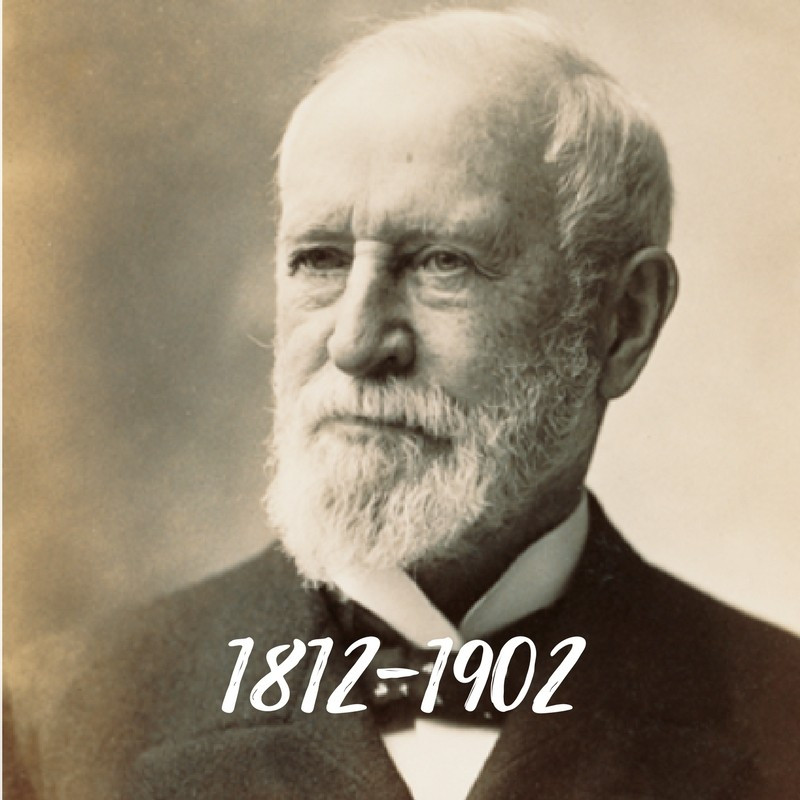 Charles Tiffany was born in 1812 in Killingly, Connecticut. At the age of 15, he began to manage a small general store started by his father. At the age of 25, with a loan of $1,000 he received from his father, he opened a store with his friend John Young, whose sister he was dating and would later marry. The pair developed a reputation for selling only the finest quality goods and specialized in Bohemian glass and porcelain. The company was changed to Tiffany, Young & Ellis in 1941 after they brought on a partner, J.L. Ellis. Unlike any other store in the 1930s, Tiffany would clearly mark a price on every item to avoid haggling over prices and give birth to the 'price tag.' Legend has it that after their first three days in business, the store had brought in just $4.94 in sales.

But the partners persevered, and by 1845 they would establish the first-ever mail order catalog in the United States, known as the "blue book." Charles Tiffany would establish the color palate for his catalogue in the familiar Tiffany blue we know today. He would soon extend the same color scheme to all Tiffany marketing and packaging materials, later culminating in the immortal Tiffany Blue Box. Some believe that the robin-egg blue color was chosen because of the popularity of the turquoise gemstone as a wedding day memento in that era. Tiffany blue is now one of the very few trademarked colors in the world.

By 1848, the company would begin focusing more on jewelry, most of which was imported from Europe. John Young would have the good favor of being in Paris on a buying trip in 1848 at the height of France's second revolution. Many wealthy nobles, who were desperate to flee Paris, sold their diamonds to him in large quantities at heavily discounted prices. He would return with the gems to America, and the company would shift its interests to diamonds and precious jewelry. Two years later, they would open a location in Paris at 79 Rue de Richelieu. Its presence in Paris allowed the firm to keep abreast of the latest trends from Europe. In 1851, after observing the popularity of silver jewelry in England, Charles Tiffany would adopt the standards of English silver, coining the term 'sterling silver' in the United States.

After buying control of the company in 1953, Tiffany would establish himself as one of the world's pre-eminent jewelers. But as the American Civil War became a reality in the early 1860s, Tiffany recognized the demand for expensive jewelry was likely to wane. He shifted his focus towards supplying swords, medals and light armor for the war. His role as a designer and supplier of Civil War medals would not be forgotten after the war's end. In 1877, he was commissioned to design a medal for the New York Police Department. Their "NY" logo design, would become immortalized when the New York Yankees Baseball team adopted it as their logo in 1909, and today it is one of the most valuable sports brands in the world. The company would later be asked by the US Navy to design a medal for a sailor or Marine who "in action involving actual conflict with the enemy, distinguishes himself conspicuously by gallantry and intrepidity at the risk of his life above and beyond the call of duty without detriment to his mission." The design would become known as the Tiffany Cross Medal of Honor, and it has been awarded to 22 people.

The end of the war also permitted Charles Tiffany's focus on diamonds to begin anew. By the 1870s, Tiffany would be known as the King of Diamonds, and his influence and buying power continued to grow. His innovative work won acclaim at international expositions (Paris 1878, 1884, 1889, 1900; Chicago 1893). In 1867, Tiffany & Co. won the Award of Merit at the Paris Exposition Universelle, the first time an American company had been so honored by a European jury.

In 1879, Tiffany acquired a 287-carat yellow diamond mined in South Africa two years earlier. He would entrust its cutting to a 23-year old gemologist who had just joined the company. The now famous Tiffany Yellow is an 82-facet cushion shape weighing 128.54 carats. In over 100 years, the stone is only known to have been worn by two women: Mrs. Sheldon Whitehouse at the 1957 Tiffany Ball and Aubrey Hepburn in 1961 in a publicity photo for the movie, Breakfast at Tiffany's.

In 1886, frustrated by ring settings that covered all but the table of a diamond, Charles Tiffany himself designed a new clasp to allow more of each diamond's brilliance to be seen. What soon became known as the Tiffany Setting, was a six-claw setting with minimal use of metal that would expose more of the diamond. It has been called the most "brilliant ring ever" and is now a universal term to describe any diamond mounted in a claw setting, Tiffany or not.

In 1887, Charles Tiffany successfully purchased about one third of the French crown jewels when they were sold off after the collapse of the Second French Empire. One of his buyers, Thomas Banks, was coincidentally in Paris at the time, and Tiffany became the single largest buyer during the sale, which further raised his prominence and influence among wealthy European society. He purchased several famous stones, including some depicted in artwork having been worn by Queen Elizabeth I and Napoleon.

By the time of his death in 1902 at the age of 90, Charles Tiffany had transformed a $1,000 investment into a $35 million dollar fortune. At the time, that represented 1/616th of the entire United States GNP.