Activity in the midstream of the diamond pipeline was mixed in the past month. On one hand, the high level of activity typical in the post-New Year and holiday sales season was not seen as much this year. On the other hand, traders are reporting steady demands and prices, with a few pockets of occasional rise in local demand for polished. The highlight was activity during the Hong Kong trade show, where trading activity was above the levels seen in recent months.

Noteworthy was the purchase of Blue Nile by Bain Capital, which creates a sense of uncertainty among some of their vendors. The drop in Signet sales has rattled the market, which was used to seeing the leading US retailer doing well even when most others didn’t. At Tiffany, the poor results led to the immediate dismissal of the CEO, and the appointment of three new directors to the board, representing a key shareholder. On the rough goods side, De Beers hiked prices of rough in January, stretching the price too high, as indicated by the lower prices goods got at tenders that took place in the following weeks. In February, demand for rough recoiled to a certain degree. 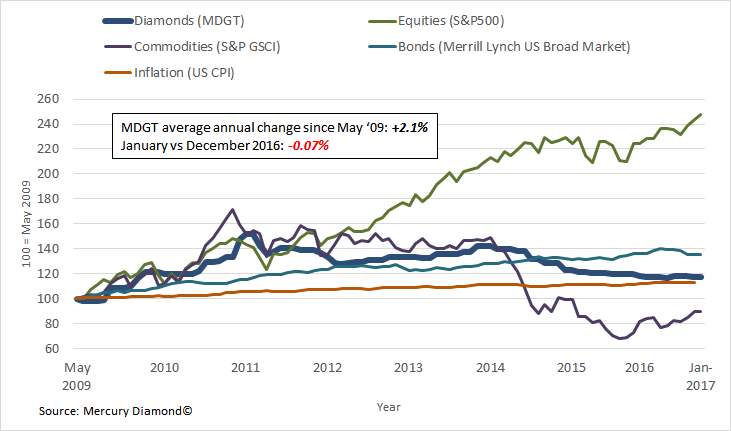 Volume of goods in the wholesale market indicates a decline of goods in February compared to January (shown below in green), especially from 0.90 carats and above. A rise in inventory (shown in red) is mainly for smaller goods, 0.70 carats and below, as show in the following table.

Volume of Goods in the Wholesale Market 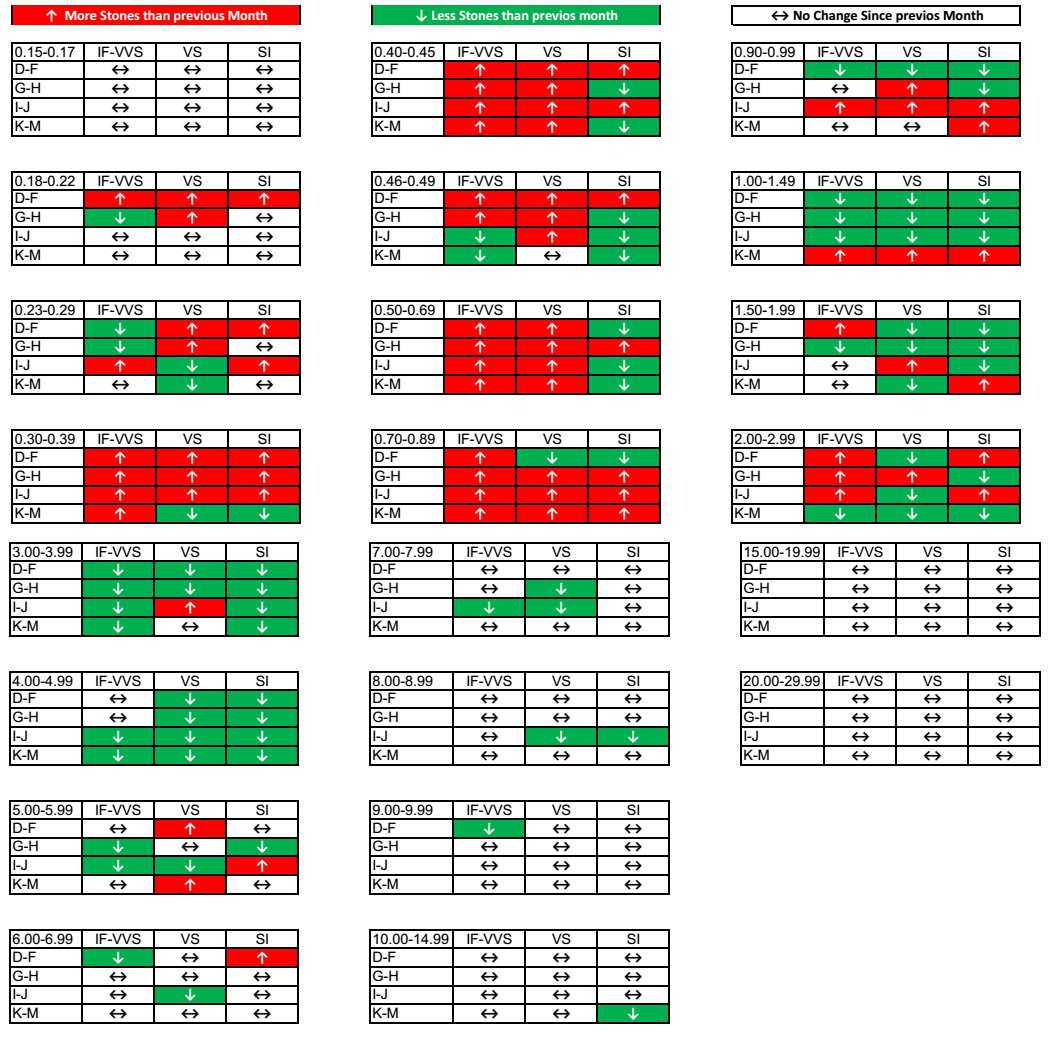 While inventories shifted, demand in the market remained mainly flat, possibly due to a cautious approach on the part of diamond traders. The few exceptions were pockets of rising demand: not more than pockets, but all pointing to positive activity, as shown in the following table. 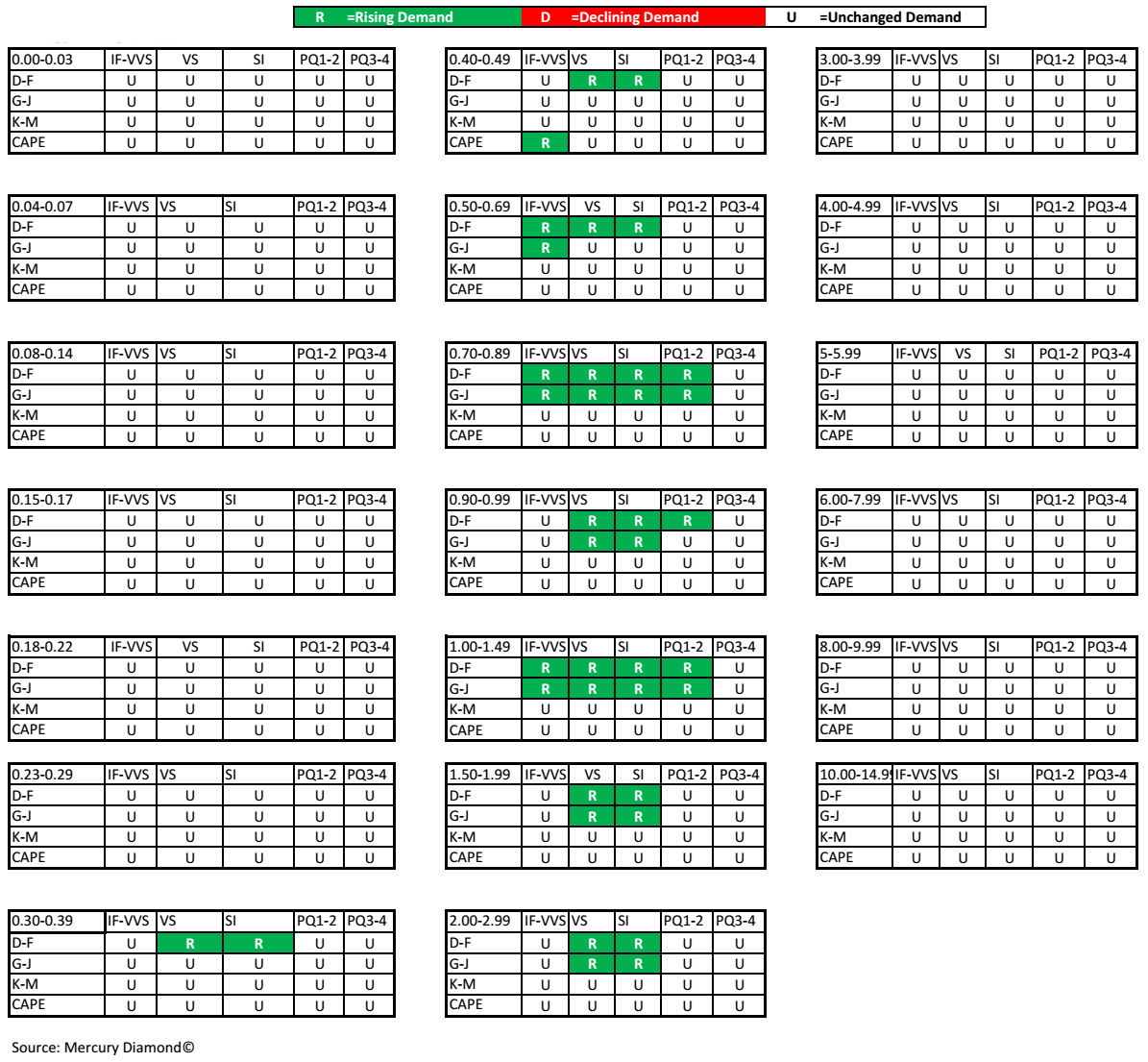 Traders in the US market reported that the diamond market was very soft. The post-holiday season did not result in major stock replenishments, as is typical of the January and February period. Preparations for Valentine’s Day were not as large as in the past. US wholesalers say that the Chinese New Year and Valentine’s Day did not bring what they were hoping for.

Following the announcement by JBT that some 1,270 retailers closed their doors in 2016, and that only 275 new stores opened, a rising concern is about which of the remaining retailers, specifically the second tier specialty retailers, will survive for another year. These closures are not limited to retailers, as 250 wholesalers and 150 manufacturers also closed during the year.

With that said, there was a rise in demand for Rounds 0.70-2.99 carat, D-J, VS-SI in very good makes. Demand for Pear shape and Ovals in excellent makes was steady, without any kind of increase in price. Goods in 1-2 carats, F-H, VS2-I1 also sold.

The polished market was pretty flat in the weeks prior to the Hong Kong show, according to traders. Many waited to see how the show would go to understand which way the market was heading, before deciding on what action to take. Prices in the market were flat as well. While polished diamonds did not move as they should, rough was as strong as ever. One trader characterized the market as “very weird.”

The diamond market acclimatized to India’s demonetization policy. However, the local consumer market has not fully recovered. What does worry the diamond community are fears that the Prime Minister will follow up on demonetization by introducing additional extreme financial measures.

The Hong Kong show opened on February 28 at Asia World Expo. There were expectations in the market that the show would rejuvenate business and signal a turn around, which it did to some degree for the diamond trade. Dealers in Hong Kong had a good feeling about the show, perhaps due to the improvement in Chinese New Year business this year compared to last year. Of course, between the small improvement in China and the continued slow market in Hong Kong, the consumer market signaled that, at best, a cautious optimism was in order. The surprising component of the trade fair was the large presence of traders from mainland China. They purchased and ordered goods against pent-up demand from shortages that developed in the Chinese market. Demands at the show were noted for 1.5 carats and smaller, and commercial quality large goods, 3 carats and above.

For Hong Kong itself, wholesale demand remained slow but steady. There is regular demand for Rounds 0.30--0.89ct D-G VVS-SI and Rounds 1-2ct D-G VS-SI. Sales of Squares and fancy shapes were flat.

Israel saw a continued quiet period, with a small improvement in trading levels during the trade fair that took place at the Israel Diamond Exchange (IDE) in February, which lifted the mood a little. The first few days of the fair were busy, and the trading floor at the IDE was packed. However, by the end of the week, traders said that trading levels were merely “okay”.

As in New York, Mumbai and Hong Kong, Israeli traders in Ramat Gan said the demands were unchanged from January, and that the post-holiday demand seen in the past was much weaker this year. The demands seen in the market were for typical American goods, but their prices remain low. A shortage in certain items contributed to the quiet market. Nice-looking goods are still selling at decent prices, specifically Rounds, triple excellent, and fancy shapes in nice models. Everything else was sold at “cutthroat” prices, as one broker described it. For example, fancy shapes in less than nice models sold at 60-70% below list prices.

Regarding smaller goods, there was no noticeable change in the demand for goods seen during January. Goods in higher demand include 0.05 carats and larger, including 0.10 carats. Anything smaller is in lower demand. Regarding certified goods, beyond the usual demands for American goods, there was a certain rise in demand for cleanish round caraters with color. Larger-size goods are currently pretty quiet in Israel. It’s a quiet market for fancy color goods as well. Wherever there is demand, it is limited to good makes.