Green color in diamonds is caused by exposure to radiation. This natural phenomenon occurs when diamonds come in close contact with radioactive uranium from rocks near the earth’s surface. In rare cases, this radiation can be found in groundwater sources. This makes natural green diamonds extremely rare since the conditions must be perfect and extremely fortuitous to bring these two rare phenomena together. Research shows that green diamonds are more common in alluvial deposits because diamonds can be transported to or by sources of radiation, which is more likely to occur than for radiation to exist near a kimberlitic source of diamonds.

Irradiation can also be generated in a laboratory using a linear accelerator, gamma rays, or a nuclear reactor. After exposure to radiation, diamonds are typically heat treated, which helps to disperse the color evenly throughout the stone.

Green diamonds present major challenges for grading labs and valuation experts because it can be very difficult to differentiate between natural and enhanced radiation because both forms of radiation are essentially the same. In many cases, green diamonds are first submitted to grading laboratories for an “origin of color” identification report, and results are not always conclusive. The difference in value between natural and treated green diamonds is dramatic, which puts much significance on the grading and identification process.

It is typically easier to identify a natural green diamond before it is polished because naturals sometimes display green or brownish surface spots called radiation stains, which cannot be replicated in a lab. While these surface stains are usually lost in the faceting process, they are occasionally intentionally left on the girdle to aid in identification. Fancy vivid green diamonds are highly unusual, and often display secondary color hues such as brown, yellow, gray or blue. The largest known fancy vivid green diamond is the Aurora Green, weighing just over five carats as a polished diamond.

Some mines, notably several in Botswana, produce stones that appear green to the untrained eye that are actually white diamonds that have an exterior green coating or skin. Once polished, these stones typically revert to an off-white color, or sometimes a light yellow hue known as “silvery capes.”

In an incredibly unusual and mysterious accomplishment of nature, some green diamonds can actually change color based on their environment, so that they are not really green at all. Known as “chameleon diamonds,” these stones can temporarily adopt new color hues based on different levels of exposure to either heat or light. In most cases, these stones show a green base hue, and there are likely chameleon diamonds that have been mistaken for green stones throughout history. Chopard explained that while typically these diamonds appear olive green or greyish-green, they can shift to an intense yellow or orangy-yellow when kept in the dark for a full 24 hours or more, or when they are heated to about 392 degrees Fahrenheit. However this change is usually short lived.

Jeweler Peter Kaplan first documented this color-changing phenomenon in 1943. After selling a stone of light yellowish-green color, his customer returned several weeks later to argue that the color had changed to a more saturated green after her ring had been stored in a jeweler box for some time. She questioned whether the stone was indeed a diamond at all. She later discovered that the stone she had bought was in fact unique, and much more valuable than what she had paid for it.

One in a million

Since the conditions in nature to create green diamonds are so enormously rare, they have only been found in a few small pockets around the globe. South America and India have both produced them in the past, but there are few diamond projects still active in these areas and green stones have not been discovered for some time. They have also been discovered occasionally in Borneo, the Central African Republic (CAR) and Russia.

Natural pure green diamonds are extraordinarily rare, and are often not mentioned alongside the reds, pinks and blues. This has more to do with the popularity of green diamonds, which are generally in less demand than some of their fancy colored counterparts.

The most famous green diamond ever found is the Dresden Green because of its size – 41 carats. The rough diamond from which it was cut was likely around 100 carats. The stone is named for the city of Dresden, the capital of Saxony in Germany where it has been on display for more than 200 years. The first recorded reference to the stone is found in a letter dated from 1726, from Baron Gautier, the "assessor" at the Geheimes Rath's Collegium in Dresden, to the Polish ambassador in London. The letter refers to the green diamond being offered to Frederick Augustus I (1694-1753) by a London merchant for £30,000.

In October 2000, the Dresden Green was displayed alongside the Hope Diamond at the Smithsonian Institute. It was a dream of Ronald Winston to unite these two diamonds to display them as perhaps the two rarest in existence. It remained at the Smithsonian until January 2001 when it was returned to the Albertinium Museum in Dresden, where it remains to this day. 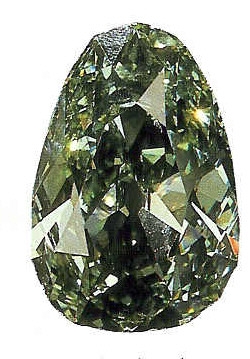 The second largest polished green diamond was not given a name, but has been referred to as the Gruosi Green, named for its current owner Fawaz Gruosi, the founder of the Swiss jewelry house De Grisogono. Gruosi purchased the stone for an unknown some from a private diamond dealer in 1998. The original rough stone weighed nearly 100 carats, and 75% of that was sacrificed in order to yield a near-flawless green cushion cut of 25 carats.

Gruosi describes the diamond as the finest modern specimen of a green diamond and said that “looking at this stone is like looking into the sea, it’s an unusual green that is sparkling and alive.” He set the stone in a gold ring, surrounded by 382 smaller black diamonds weighing seven carats in total. 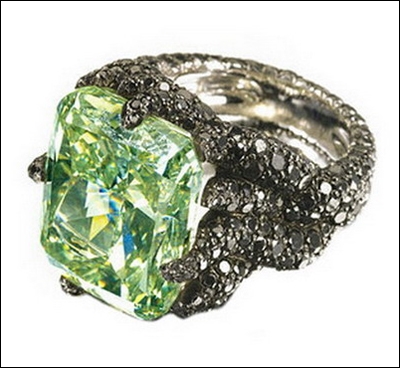 While not strictly a green diamond, the Chopard Chameleon is the world’s largest known example of a chameleon diamond. The 31.31-carat oval cut diamond with virtually no inclusions was acquired by Chopard in 2007, comfortably exceeding the previous record for a chameleon diamond at 22.28 carats. The stone was unveiled to the public at Baselworld 2008 and is set in a ring with a pavé setting of other small fancy colored diamonds.

More recently, Christie’s announced in May of this year that it had sold the world’s largest fancy vivid green diamond to Chow Tai Fook at its auction in Hong Kong. The 5.03-carat rectangular cut, VS2 stone sold for $16.8 million or $3.3 million per carat, a record for a vivid green diamond sold at auction. 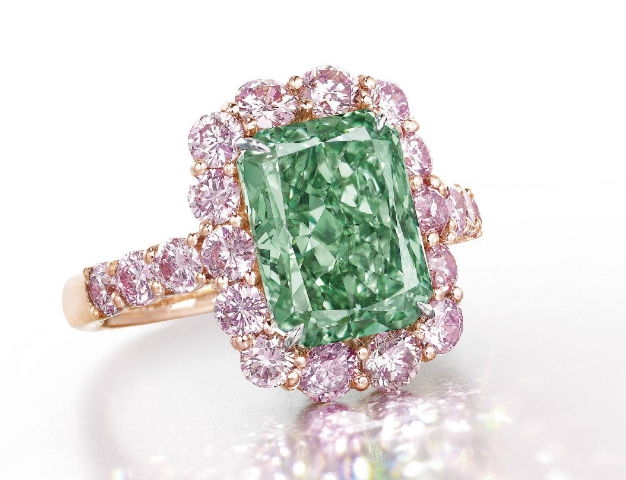 We know what gets us into trouble, so why are we s...
The Virtue of Real is Rare