Heading into a New Year Last week we published our monthly report on the Mercury Diamond Global Tracker™ (MDGT™) for December, showing that prices of most round diamond size ranges between 0.30 carats to 2 carats rose during the last few months of the year. At the same time, our index, which covers a very wide range of goods has declined. It seems puzzling, but it really hides a sad truth about demand for polished diamonds around the world, mainly in the US and China, the two largest consumer markets.

Together with the index, we show prices of round polished diamonds, from 0.30 carats and up. The index has declined steadily since October 2016, but really has been sliding since mid-2014, as seen in the following graph.

Above all, the decline in the index reflects the overall decline in demand for polished diamonds in the main consumer markets. However, as far as the MDGT™ index is concerned, it reflects declining prices of larger goods (1 carat and larger). These goods are not just round-shaped diamonds, but also square and fancy shape diamonds. Collectively, these diamond shapes and sizes have suffered from a decline in price, again, as reflected by the MDGT™ index.

At the same time, there is a large mass of goods that do not fall into this category of 1 carat and above in a multitude of shapes. Smaller goods, weighing less than one carat are among the most popular items in the market, even in downward facing times. It is therefore worthwhile examining them independently.

A long-term view shows that rounds weighing from 0.30 carats up to 0.99 carats follow the same general trend as most other size round-shaped polished diamonds, as the graph below shows. Prices rose until July 2011, fell through the end of 2012, rose a little, paused and increased again in mid-2014, declined in 2015, and have been slowly sliding since 2016.

If we consider the same period – 2009-2018, but remove the larger goods from the graph, as shown below, we see the general trend more clearly. Smaller goods were on the same general track as larger goods. This is no surprise. Polished diamond prices are effected by consumer demand, availability, financing, rough diamond prices, cost of labor, taxation, even energy costs.

However, in addition to all these factors that impact all diamonds, polished diamond prices are subject to localized pressures, especially cultural trends. If consumers start preferring a certain range of goods over others, and this trend is long lasting, naturally we will see a rise in the prices of the more desired goods and a decline in price for the goods that lost favor.

This is exactly what we have seen over the past several years. A particular band of goods, smaller size rounds, are in growing favor in the consumer markets, most notably in the American market. This rise in demand positively impacted their prices. That is to say, their prices improved.

In the following graph, we depict changes in the prices wholesalers were able to achieve for 0.30-0.99-carat rounds in the last two years. The graph shows their prices indexed to January 2017. During the two-year period, prices of these diamond size ranges generally declined in 2017, starting to rise in November, during the holiday season. It is not surprising that prices increased in November and December, because that is the height of the most important diamond jewelry selling period.

While prices tend to ease in January and February, that did not happen in 2018. Instead, prices continued to climb throughout the year, especially prices of thirds, goods weighing 0.30-0.39 carats. For comparison, the following graph includes the price trend of 1-carat rounds, in addition to those of the smaller goods. As can be seen, while 1-carat rounds also increased during an extended period in 2018, they floundered in the second half of the year, including during the holiday period. Conversely, the smaller goods continued to rise, even despite a dip in September. 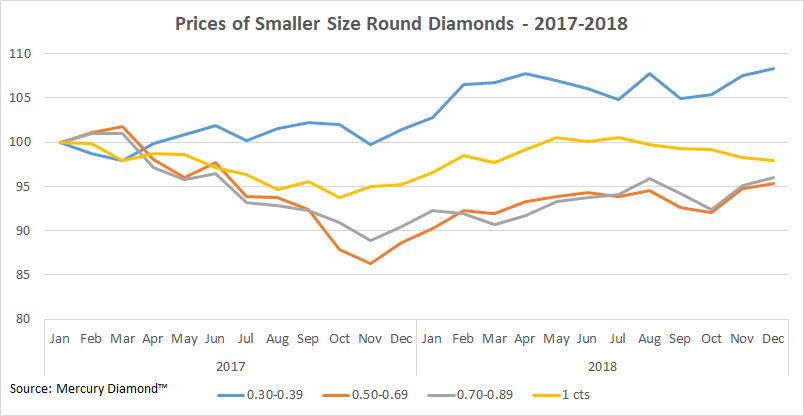 There is something very reassuring about these price increases. In areas where consumers have an interest, demand is strong enough to allow price increases and sustain them without deterring consumers. That is a somewhat obvious lesson, but an important one none the less.

The diamond industry feels down, almost beaten. But if it gathers enough ability to spur interest in diamond jewelry, it will see improved demand and prices. With higher prices and cautious management comes better profitability as well. And that is the message for the coming year.

As we head into 2019, we must forge ahead with focus and desire to improve demand. Many see the threat of lab-grown, decreased financing, and retailer blues. Continuing in that mood will not pull us out of declining consumer demand. The midstream of the diamond pipeline should find ways to support retailers’ marketing efforts, create effective programs, and continue to gather data from the retail market to give it the ability to be respond to small, but critical, changes in the consumer market.