How We Find Diamond Sources: Kimberlite and Lamproite We have already described how diamonds are brought to the surface of the Earth in kimberlite and lamproite pipes, and that these volcanic events occur within continental cratons, where the conditions exist to help diamonds maintain stability on their journey to the surface. This knowledge has been very helpful in diamond exploration, as it narrowed down the geography over which diamond exploration activity occurs.

We must, however, put this into context. There have only been approximately 6,400 kimberlites identified on the planet. They typically range in size from 1 to 50 hectares. This means that total kimberlite occurrences are tens of thousands of hectares of land-mass, compared to 13 billion hectares of land on the planet, of which 7% is located within Archean cratons . Given that less than 1% of kimberlites will yield an economically-viable diamond deposit, finding a viable diamond mine is a daunting task. Finding the proverbial needle in a haystack is probably much simpler!

Geologists do have a few tools at their disposal to locate and identify kimberlite pipes. Once identified, the only way to test the deposit for diamonds is to sample it, a subject that I’ll discuss next week. For now, let’s look at a few of the ways that kimberlite pipes are found.

As we know, kimberlites contain a very small proportion of diamonds by volume. Fortunately, other minerals are more plentiful within the rock, and can provide a clue to both the whereabouts of the source pipe, as well as the likelihood of it being diamondiferous. These minerals include garnet, clinopyroxene, orthopyroxene, olivine, spinel, ilmenite, magnetite, rutile, and zircon.

Perhaps the most important of these minerals is garnet, or more specifically, a special member of the garnet family known as pyrope. A rare form of pyrope contains approximately 3-8% Chromium (III) Oxide and is known as a chrome-pyrope. In diamond exploration, these stones are often referred to as G9 or G10 garnets, depending on the concentration of Chromium Oxide. What makes the garnet special is that it forms under the same temperature and pressure conditions as diamond, within the same diamond stability zone in the asthenosphere. In fact, G10 garnet is frequently an inclusion inside a diamond, indicating that they form alongside each other. Finding large concentrations of G10 garnet can be a good indication of a diamondiferous kimberlite.

On the Mohs hardness scale, garnet has a hardness of 8, compared with diamonds, which have a hardness of 10. As a relatively hard mineral, garnet stands up against the heavy weathering and erosion that takes place over millions of years. Therefore, many of the garnets that travelled alongside diamond within a kimberlite remain intact on the surface and can be used to pinpoint the source, or at least significantly narrow down the search. If geologists know which direction erosion or weathering is likely to have taken, such as the action of glacial movements or tidal water flows, they can use the dispersion of indicator minerals to reverse engineer the likely location of the source. The resulting mineral dispersion can be seen visually as a pathway, often referred to as an indicator mineral train. 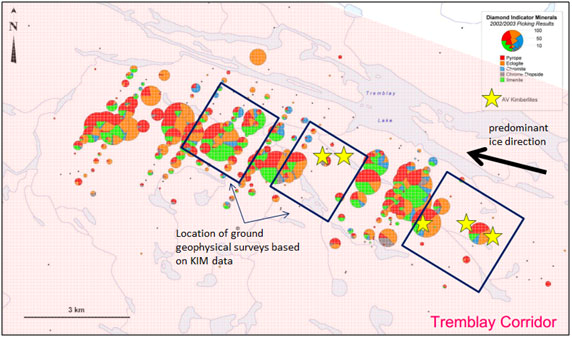 Ground geophysical sampling is a challenging and expensive process. It involves taking random samples of rock at various distances within areas of interest. In the more high-activity exploration areas, such as Canada, Russia, and Botswana, this work has been ongoing for many years and data can sometimes be available on historical mineral sampling. However this is still a very high-risk activity, and many companies run out of money before they discover anything of interest.

Geologists have also developed techniques to sample from the sky, which allows them to cover a much wider area in a shorter period of time. While ground sampling is still necessary, airborne geophysical sampling can help to identify prospective targets in an area already identified as a potential host of diamondiferous kimberlites.

Kimberlites contain high concentrations of magnetite and ilmenite, which exhibit a weak magnetic field. Conversely, the weathered regions above a kimberlite tend to exhibit an electromagnetic response, thanks to the weathering alteration of the near-surface layer. Using specialized equipment installed on planes, large swathes of land can be scanned from above to identify areas that exhibit anomalies in the electromagnetic field, caused by the magnetic kimberlite below. This data can be combined with ground sampling data to refine both models even further.

This technology has been around for many years, and has been steadily improving. Tests conducted a decade ago tended to identify numerous targets that were not actually kimberlites. Today’s equipment allows us to harvest data from closer to the ground, which makes results more accurate. It may only be a matter of time before this technology advances further to the point where it can locate kimberlite deposits with even greater accuracy.

With an understanding of how difficult it is to identify and zero in on kimberlites, we can start to understand why diamond exploration is so difficult, and why so many exploration companies run out of money before they make a significant discovery.

Diamonds, Not Mined Diamonds! Why We Have to Stop ...
The Great Diamond Slowdown of 2016, and Why We Nee...