After considering the techniques that diamond exploration companies use to identify kimberlite pipes, we know that while technology and know-how have improved steadily, it is still true that only about 1% of kimberlite pipes will eventually yield an economically-viable diamond deposit. Finding a kimberlite field is by no means a guarantee of success, and a lengthy and expensive process of testing and drilling must be undertaken to test the viability of a pipe once it is discovered.

In simple terms, exploration companies take a series of samples from a kimberlite target, with each one getting gradually larger and more expensive. Each type of test is designed to assess different variables, depending on the stage of exploration. Since sampling is expensive, companies often have to raise additional financing before continuing on to the next phase of testing, and the previous results must be positive to ensure that they can raise sufficient capital to continue.

The first stage in testing is to analyze samples from the surface around an anomalous area expected to be a kimberlite. This usually means taking rock samples and testing for the presence of non-diamond indicator minerals in sufficient quantities to yield a diamond-bearing kimberlite. Remember that certain indicator minerals, specifically a special type of garnet, are formed in the same region of the Earth as diamonds, and can be indicative of a diamond-bearing pipe. In rare cases, there can be kimberlite outcrop, a portion of the underlying kimberlite that is exposed at the surface. This is unusual -  more commonly, we find kimberlite boulders and other smaller fragments removed during weathering and erosion.

The next stage is to drill the target. Since drilling is very expensive, all the preliminary assessments should be supportive of a diamond-bearing deposit. The first round of drilling is more for the purpose of identifying if the target is even kimberlite, and also if it contains any diamonds. Usually this can be determined from just one or two small drill holes. Of course, if the sample is not kimberlite, all drilling work ceases. If kimberlite is discovered, the samples are sent to specialized laboratories to check for the presence of diamonds.

The most common type of drilling in mineral exploration is called reverse circulation (“RC”) drilling. The drilling mechanism is a pneumatic reciprocating piston known as a “hammer,” which drives a tungsten-steel drill bit. Reverse circulation is achieved by blowing air down the rods, which creates a differential pressure that drives the sample material back up. RC drilling is expensive, but has the advantage of being able to reach depths of up to 500 meters below surface. It also has a tendency to be very rough on the drilled material, and can result in diamond breakage if larger stones are present.

As I have mentioned in the past, the actual commercial-sized diamond content of a kimberlite is a very small component of the total rock, often as low as one part per 25 million. That means that a small drill sample, often just a few dozen kilograms, is not likely to yield many large diamonds, even in a highly diamondiferous deposit. However, diamonds follow a lognormal statistical distribution, meaning smaller diamonds occur in much higher numbers than large ones. The initial testing of a kimberlite is actually looking for extremely small diamonds. Firstly, these ‘micro-diamonds,’ as they are known, show whether any diamonds exist in the deposit at all. Second, they often follow a very predictable statistical pattern that geo-statisticians can use to determine whether larger diamonds may be present and help to decide if further drilling is warranted.

If initial results justify further drilling, then a large-scale drill program is organized, often known as a mini-bulk sample. The goal of the program is to get a larger sample of kimberlite, which will hopefully yield commercial-sized diamonds. This new diamond data can be combined with previous micro-diamond data to assess the grade of the deposit. The grade is essentially the amount of diamonds per unit of rock within the kimberlite, and is one of the key elements of the ‘magic formula’ that I will discuss next week. The presence of large diamonds at this stage is critical if the project is to continue.

Mini-bulk sampling usually involves taking many drill samples. In addition to checking for grade, it can also be useful for the early stages of delineating the ore body. That means trying to determine the overall size and shape of the kimberlite underground. The drill samples are meticulously logged, and the data is fed into 3D graphing software, which creates images of the deposit. Although the major producers all engage in diamond exploration to some extent, small, publicly traded companies with limited resources conduct most of the exploration work. Since drilling can often cost a few million dollars, this stage can often make or break a small company, as it can be difficult to obtain more financing from investors if preliminary results are weak. 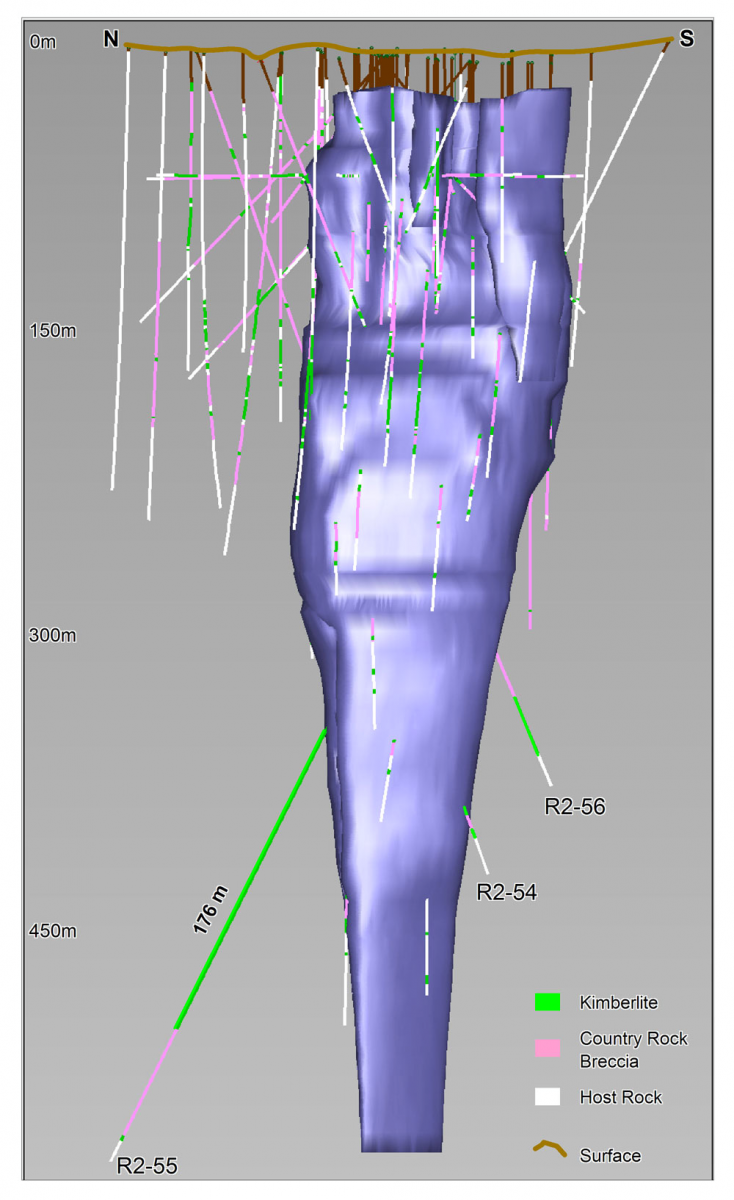 If mini-bulk sampling results are positive, the next step is often a bulk sample. The goal of the bulk sample is to accumulate a large enough parcel of diamonds that can be used to determine the average value per carat of the deposit, and to further refine the size-frequency distribution models. The average value per carat is another piece of the ‘magic formula.’ For this type of valuation, the larger the sample of diamonds – the better. However, it is typical that bulk samples range from 500 – 3,000 carats. While this can be highly indicative of the underlying average value, it still requires statistical modeling, which attempts to extrapolate the estimated value of the entire deposit from a relatively small sample of diamonds. 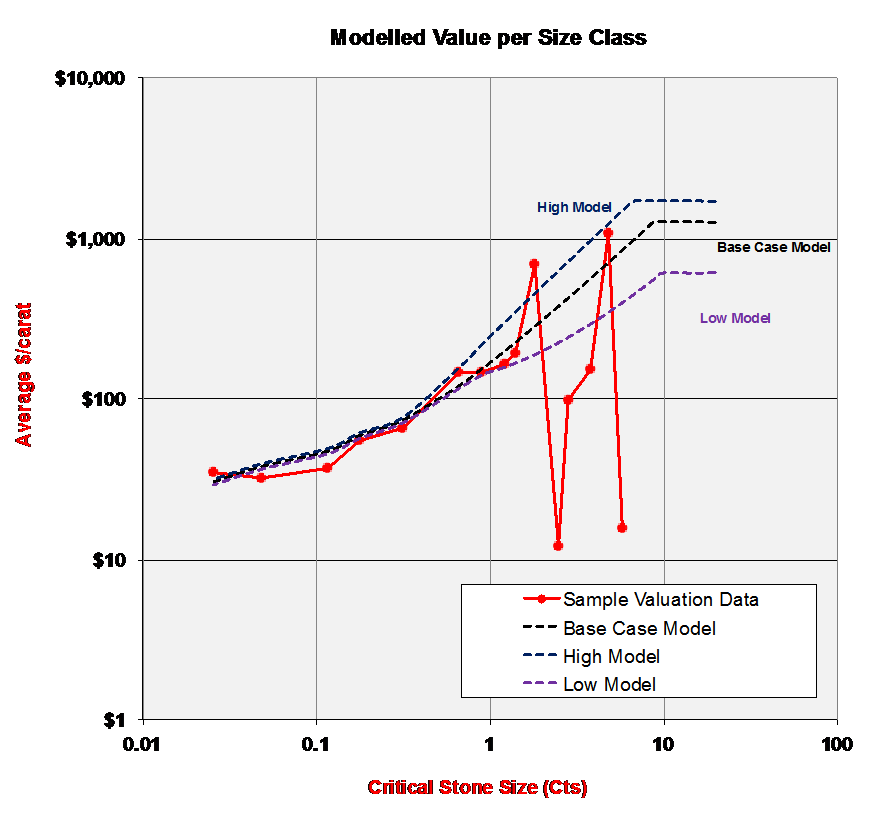 By the end of the bulk sampling stage, the owner of the property should have a very good idea of both the overall size of the deposit, as well as the expected average value of each ton of rock to be mined, which is based on both the grade and the average price per carat. If all of this information is encouraging, a feasibility study will be commissioned. I will talk more about the feasibility study next week, but suffice to say for now that this is a comprehensive project that can take two-to-three years to complete, and produces a complete technical plan for the development of a mine.

It is important to remember that very few companies ever reach the stage of a feasibility study, and many go bankrupt in earlier stages of testing. The major producers have been reducing their exploration expenditure for years, so diamond exploration is a high-risk, high-reward venture not for the faint-of-heart.

Fancy Color Diamond Price Direction
Diamonds, Not Mined Diamonds! Why We Have to Stop ...