After the strong showing at the conclusion of the 2017 holiday season, the realization that it was not in keeping with the entire mediocre year that preceded it is dawning on many, but not all, traders. There is a rush for rough diamonds and price increases are expected – either by miners or just by the force of demand from the secondary market.

At the same time, demand from retailers in the post-holiday period and ahead of the Valentine’s Day sales, is not very high, further indicating that consumer demand in the US is toddling along, but not much beyond that. Globally, traders did well during the holiday, especially strong brands. Luxury retailer Richemont reported that sales by its jewelry segment (Cartier and Van Cleef & Arpels) were up 11% globally. Pandora reported a 15% rise in same store sales.

With most of the public companies reporting their holiday results, it is clear that with the exception of Sterling, most retailers had good jewelry sales in the November-December period. Specialty retailers Tiffany and Birks reported a 6% and 2% rise in same store sales, respectively. Despite their problems over the past few years, department stores reported good fine jewelry sales during the holiday season. JCPenney noted that its holiday sales were led by fine jewelry, among other things. It noted double-digit online sales growth, “largely driven by sought-after gifting categories such as fine jewelry.” Macy’s, another struggling department store, had a small rise in same store sales, but noted that fine jewelry was a top performer.

Independents had a good holiday season compared to 2016, especially thanks to strong traffic in the last ten days of December, as reported by small and medium independent jewelers. Sales are estimated to have improved a mid-single digit year-over-year. One item that retailers noted that sold very well were stud earrings. The poor results at Signet, where same store sales fell 5.3% during the holiday season, stands in stark contrast to its peers. The outcome of the last minute sales activity was an optimistic mood among retailers and American retailers alike. The looming question is whether this will translate into orders to replenish retailer inventories. This is especially important in light of the rather modest stock that retailers tended to hold throughout the year.

Demands from US specialty jewelers were focused on large fancy shapes weighing three or more carats, in particular ovals. The demand for large ovals, particularly in fine makes, could be partially driven by the current shortage of this item. Fancy shapes in G-J color, SI- I1 clarities below one carat are selling well. Demand for princess has dropped.

According to one trader, dealers are keeping back inventories of quarter, third, half, and even one carat rounds on the back of the good sales of stud earrings, waiting for the prices to go up. There is still resistance from the independent storeowners to pay more for these items, but with Valentine’s Day around the corner, they may find that they have no choice.

Indian traders heaved a sigh of relief after getting through December sales, and not only because of the sudden cash flow. The strong sales resulted in a decline in inventories, which encouraged polished wholesalers stronger hand. The result is higher wholesale prices in the Indian diamond market. That said, traders understand that the December boon was temporary and that the retail markets in the US and China are not particularly bullish. Several traders expect that when inventory levels rise again and return to normal levels, the Indian polished market will experience a price correction.

The Goods and Services Tax (GST) tariff on diamonds and precious stones has been cut from the previously announced 3% to just 0.25%, the same as on rough diamonds. The news, announced by the GST Council, is a relief to diamond traders. The majority of polished goods will fall under the lower GST rate. However, some of the diamonds, sold by manufacturers directly to consumers, will still carry a 3% GST rate.

The year started slow in the Israeli diamond market, which is typical of this center, yet traders were optimistic after the good end of 2017. Demand in January was selective, underscoring that consumer demand in the US has yet to fully recover. At the same time, Israeli traders noted good demand from the Asian consumer markets, particularly for D-H color, VS-SI clarity, triple excellent goods.

Demand from the US was generally stable, with buyers interested in one carat items in typical American goods - rounds, GHI colors, VS-I clarity. 0.7-0.89-carat rounds continue to experience weak demand. Half carats are in mediocre demand, while third carats and 0.40-carat goods are experiencing good demand. This trade is taking place against continued shortages in the market and traders are hoping to see prices of polished diamonds finally inch up. Demand for fancy yellow remains steady and is characterized by shortages as well as rising prices. Demand for square and fancy-shape polished diamonds is stable.

The Hong Kong wholesale diamond market has also improved, yet traders say it is only a slight improvement. This is the case despite the fact that the Chinese New Year, February 16-20, is rapidly approaching, and it is expected that tourists from Mainland China will flood the island. Another element that should provide a boost to local traders and retailers is a booming stock market. The Hong Kong Stock Exchange started the year with great activity, and the Hang Seng Index hit a record high.

Chow Tai Fook reported a 12% rise in same store sales in Mainland China in the last quarter of 2017. However, the rise in sales was mainly in gold products. Sales of gem-set jewelry declined by 1% in China, but shot up 22% in Hong Kong. Despite the feeble total value of gem-set jewelry sales, the average price point of these jewelry items was up 10.6%.

Demand from wholesalers in Hong Kong remained stable for rounds weighing 0.50 to 1 carat, D-G color, VS-SI clarity goods. Prices of these goods increased by 1-2%, according to local traders.

In terms of fancy-shape goods, demand for heart-shaped diamonds rose this past month. Demand was focused on 0.50-0.60 carat D-G colors, VS clarity goods. Hearts weighing one carat and above were slow. Demand for oval-shaped goods was stable, with shortages in goods with nice makes in the market. The market is experiencing low demand for marquise and cushion shape.

For square-shaped goods, emeralds remain stable, though princess cuts are in low demand. 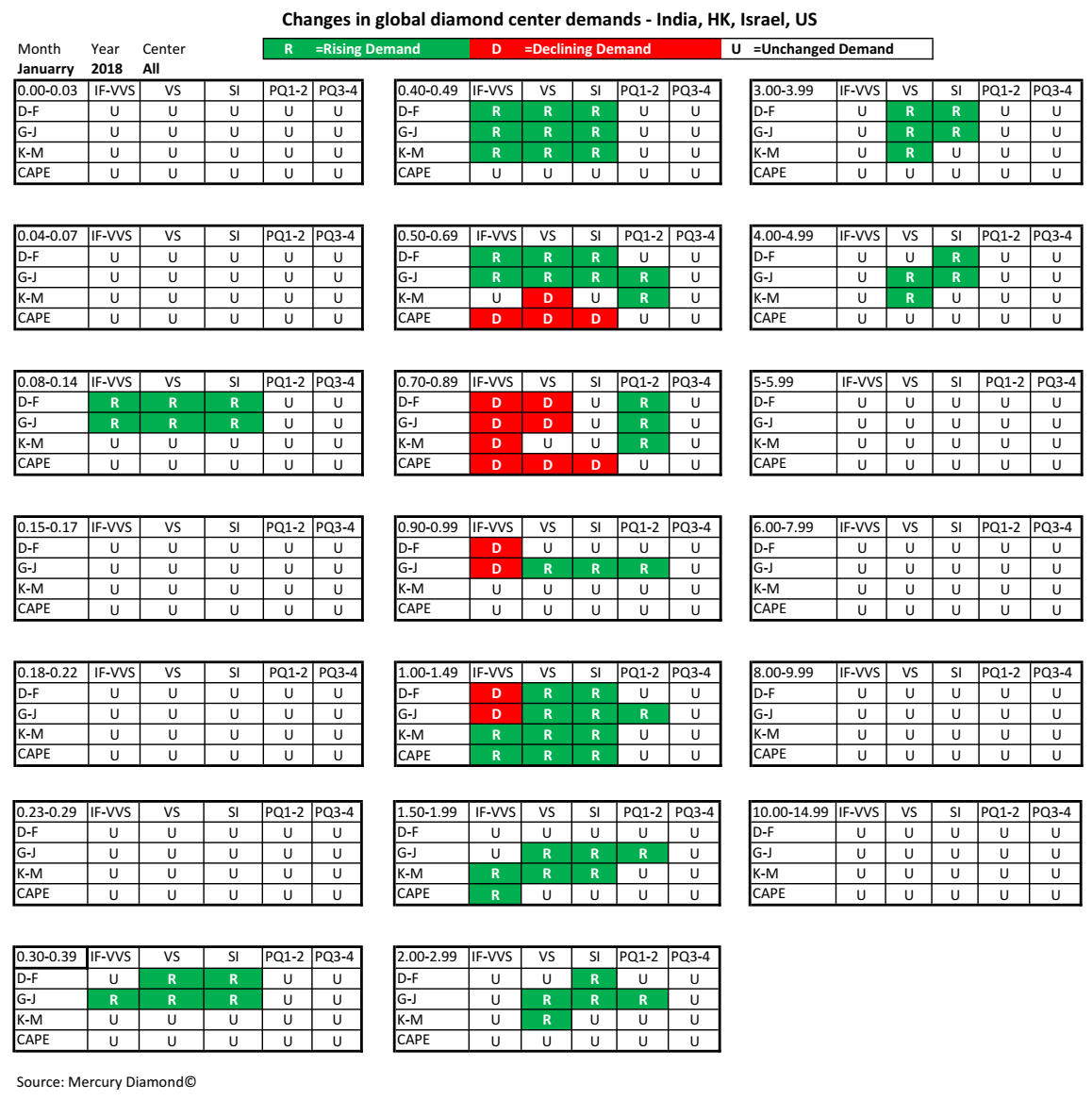 Tweet
Not All Diamonds Are the Same
Symbol of Love, or a Commodity Too?