At Mercury Diamond©, we continuously monitor the diamond market as part of our ongoing effort to understand, analyze and perform within the diamond industry. Inter alia, we track transaction prices and changes in rough diamond prices, understand market trends and follow changes in demands for polished diamonds.

Reviewing June, we see that the global diamond market is not picking up. Visitor traffic at the Las Vegas JCK show was down an estimated 30% compared to the previous year. The diamond centers feel that we are going into a period of low profitability/limited volume.

The Diamond Producer Association (DPA) introduced a new generic marketing slogan “Real is rare. Real is a diamond”. The launch will be slow, with a limited budget of only $12M.

The US consumer market is demonstrating a typical seasonal slowdown and retailers are slowing down activity respectively. The Las Vegas trade fairs demonstrated a decline in confidence on the part of US jewelers. While retailers purchased fewer items because their inventories were relatively full last year, this year it is more a reflection of a sense that there is a shift in consumer demand. The growing trends are directed toward well-designed, low cost items and branded items.

Accordingly, branded jewelry, high-end as well as mid-range, did well at the shows. Branded diamonds (Hearts on Fire, Forevermark, etc.) were also of interest. Most everything else was slow or very slow. One benefit that retailers can drive from stocking on brands is marketing. Where most retailers own just a few stores, their marketing budget is limited and, in the long run, they are losing exposure compared to the larger firms. General and regional marketing campaigns by established brands allow smaller retailers to ride on their coattails and preserve their presence in the market.

Another aspect of the June show was the rising presence of lab-grown goods. More retailers are willing to accept them as a bona fide item and, as such, are expected to stock up on these goods. Among the more prominent names to enter this field is Stuller, the leading supplier to independent jewelers in the US. At the show, Stuller said that they will go wherever the consumer asks them to go. Stuller currently offers more than 500 lab-grown diamonds on its website, about half of which are less than one carat (0.25-0.99 carat), and quite a few larger stones up to 3-carats.

Despite this change in norms, the diamond industry is still moving slowly toward securing and strengthening natural diamonds and are expected to remain an issue for some time.

Demands – Demand was largely steady, with a few increases, mostly for better goods. There was a certain improvement in 0.40-1 carats, D-J, IF-SI and in 1.50-2 carats G-J, VS-SI. Most everything else unchanged.

Signet ran into a PR issue. A woman claimed that after turning in a diamond ring for repair, her diamond was replaced with one of poorer quality. This sparked a wild series of allegations and claims by which this was not an isolated incident. The buzz was extensive, causing Signet’s share to plummet. The company, at a slight delay, responded with a number of public statements, including a declaration that it is reviewing repair submission procedures. Signet’s CEO visited the woman at home, and a number of promotional campaigns were launched.

The mood in India is calm. Business failures continue, including a number of brokers that round goods in the market and then disappear. Another mid-size company closed, leaving $12M in debt. However, the feeling in the market is that the issues are largely behind them.

Local traders are expecting the market to improve in late July. Perhaps they are counting on Belgium and Israel being on vacation.

Demand and prices remain relatively steady with a few slight fluctuations. Rounds are seeing a few declines, mainly in VS-SI goods. In fancy shapes, there is an increased interest in pointers. For squares, changes are too few and far between to identify a clear trend.

The Hong Kong market remain stable. With the exception of isolated demand for 1 and 1.50 carats DEFG SI-I goods with no certificates, demand for rounds remains stable.

Small (0.30-0.70 carat) pear shaped and marquee diamonds have seen an increase in demand in the DEFG color / VS quality. No changes in demand for squares.

Local and Indian traders had very low expectations for the June Hong Kong jewelry show. This attitude is derived of a combination of the state of the market, the timing of the show (no major upcoming events) and its small size.

The local market remains subdued and the economy is viewed as weak. Retail shop rental occupancy is said to have dropped by nearly 50% and there are still many vacancies, a testament to the poor state of retail in Hong Kong.

One of Chow Tai Fook’s main store locations in Central has renewed its contract at much less than the previous contract. Nevertheless, the jewelry retailer decided to close some of their slower shops when the contract ends.

Luk Fook reported that their profit for the past fiscal year will likely slumped 35-45%.

The Israeli market, just like the other diamond centers, remains generally quiet. Despite the drop in traffic at the Las Vegas show, the larger Israeli companies said they generated sales in line with their expectations. Despite the limited demand, there are still shortages in some goods and companies with goods on stock, actually generated business.

Demands for 2 carats and larger are slow and the Israeli market, which specializes in larger items, is suffering. Accordingly, prices for these goods are declining. Demand for 1-1.50 carats, G-H is seeing a small rise. Prices are stable for dossiers. Smaller goods have steady demand and prices.

Fancy color goods, especially yellows, are experiencing a small price softening. Demand is weakening for goods with mediocre makes and buyers are demanding a further reduction in prices. Traders are refusing, resulting in a very quiet market.

Nice make goods are few, however there is no demand for them either. 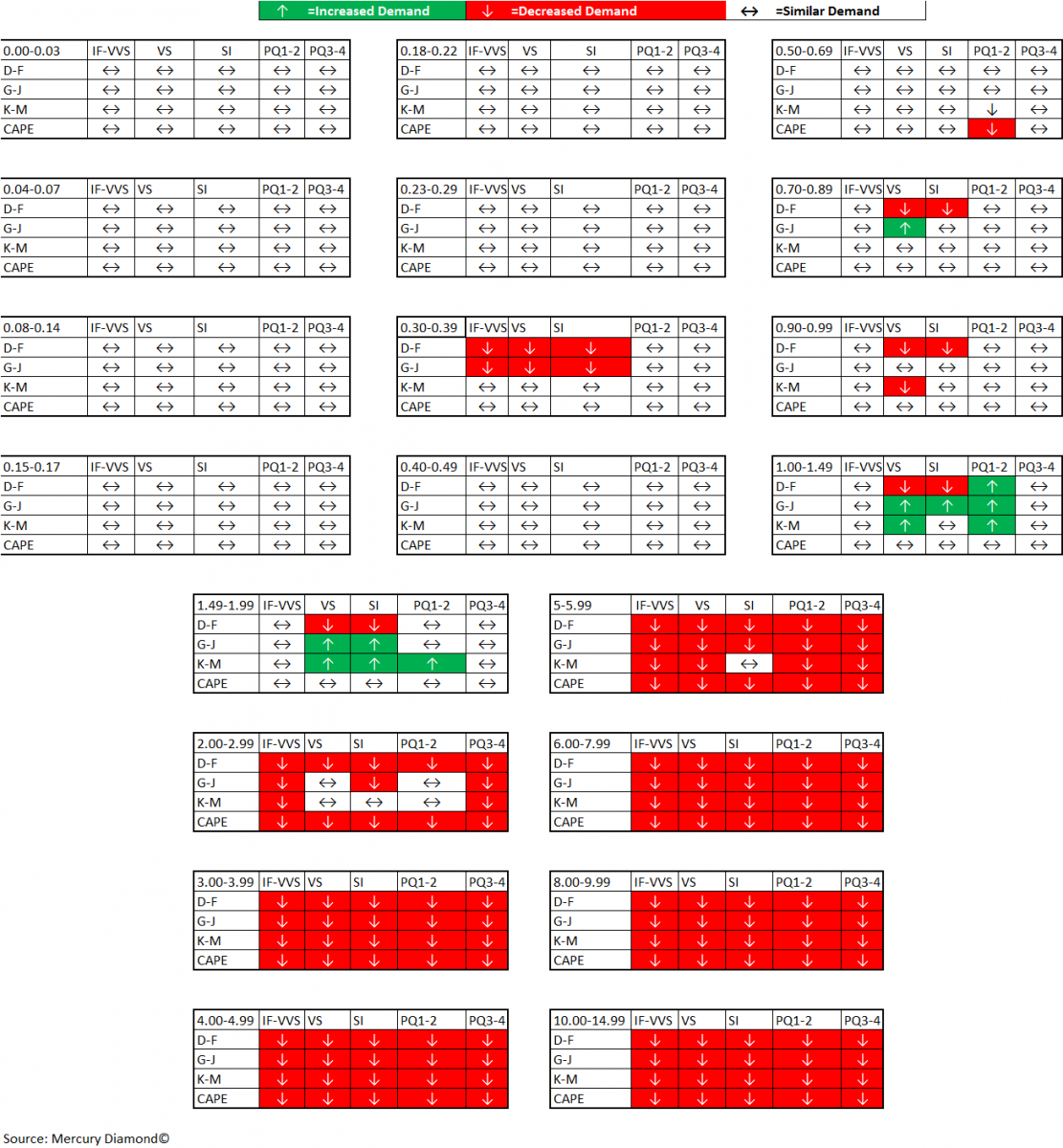 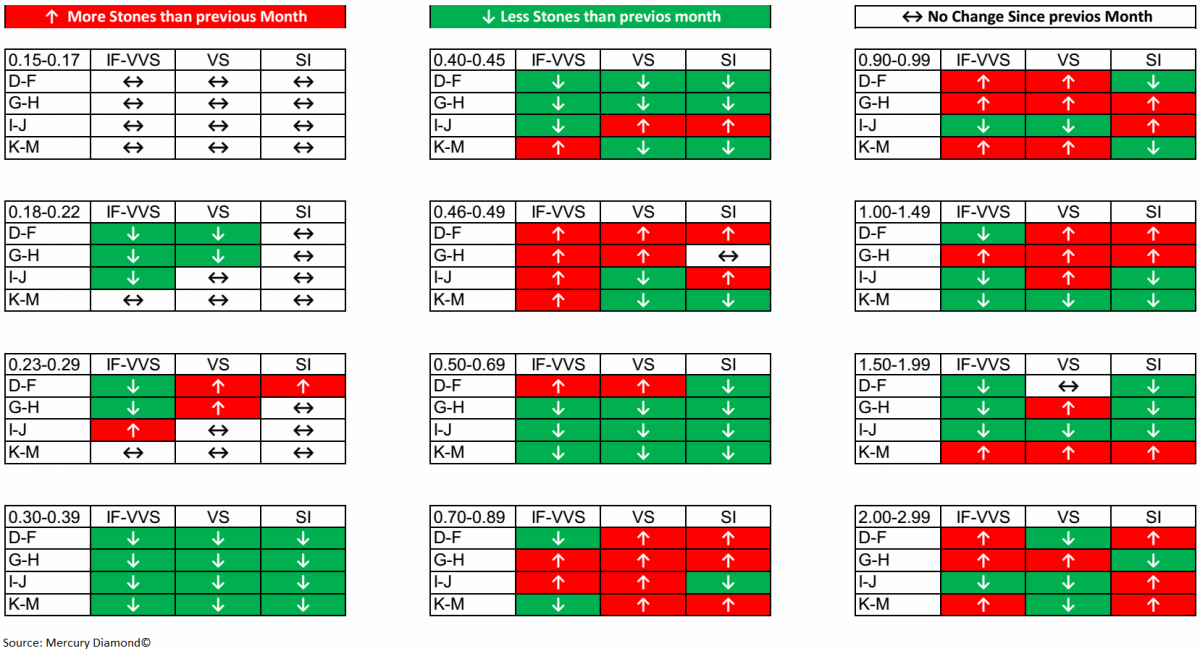 Gray diamonds
Champagne, Cognac, Chocolate and Brandy: How the I...