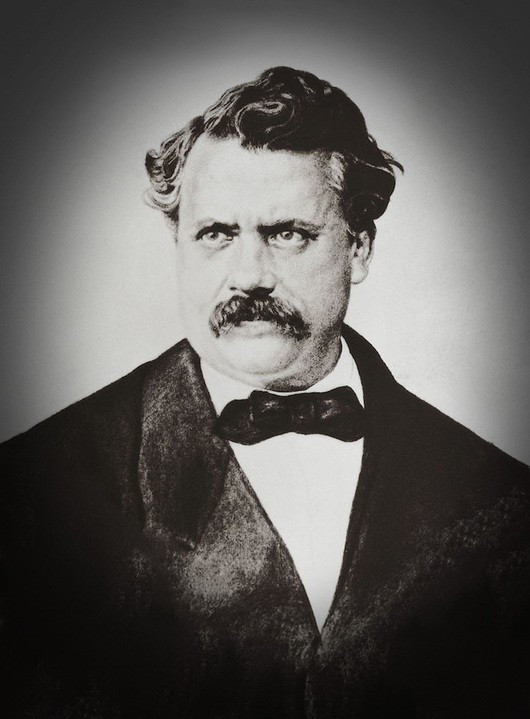 Louis Vuitton quickly found his way in this craft and built a name for himself as a master trunk maker. At Monsieur Maréchal he developed his skills and then set off on career as a skillful artisan that was frequently called upon to custom design trunks according to clients' wishes.

The last Empress Consort of the French, the wife of self-proclaimed Emperor Napoleon III, adopted a few habits of the French nobility. One of these was to acquire a personal travel trunk maker and packer. This fairly odd-seeming choice was not completely out of context, considering that today's common place suitcase was not at all a typical item in most households in the 19th century. The man Empress Eugénie de Montijo chose for the task was designer Louis Vuitton.

Born on August 4, 1821 in Anchay in Eastern France, Vuitton's future could just as easily have been predetermined by his rough childhood, as his promising ancestry. His mother died when he was just 10 years-old, and his father died not long after. However, his family's background was able to provide him with potential opportunities. He came from a family of artisans, some of them joiners, other carpenters, and some farmers. His mother, Corinne Gaillard, had been a hat maker.

The hardship of living with a strict stepmother, coupled with the boredom of life in a quiet area, led Vuitton to run away at age 14. Over the next two years he worked odd jobs and stayed wherever he could, as he slowly made his way to Paris on foot. In 1837, after walking hundreds of miles, he finally made it to Paris, a vibrant city that offered him everything he looked for: an urban hustle and bustle, financial opportunities, vibrant growth, and distance from the adopted family he left behind.

For all its grandeur, Paris of the time was also suffering from great poverty. Vuitton knew that he had to find a job quickly or else suffer from the pitiful conditions from which the city's poor greatly suffered. Due in part to the skills he learned at home, Vuitton found an apprentice position at a trunk-maker named Monsieur Marechal. At the time travel was by horse carriage, train, and boat, and travelers carrying their belongings suffered from the rough conditions of the road. Soft packaging did not provide protection for fragile objects. Hard packaging, usually sealed boxes with handles, tended to break due to the rough conditions, mishandling, and the weight of stacked boxes.

Therefore, well-made travel trunks that could withstand the travel conditions were in demand by those who could afford them. This task went beyond box making craftsmanship. Those ordering travel trunks also wanted them to be stylish, and expected the makers to perform the task of packing their goods, an additional service many trunk-makers provided. Some of these trunks went far beyond a standard size box with internal drawers and compartments. Many ordered specialized trunks to fit specific needs and objects.

Louis Vuitton quickly found his way in this craft and built a name for himself as a master trunk maker. At Monsieur Maréchal he developed his skills and then set off on career as a skillful artisan that was frequently called upon to custom design trunks according to clients' wishes.

In 1852, a year after he staged a coup d'état, Louis-Napoleon Bonaparte reinstated the French empire and assumed the title of Emperor of the French, naming himself Napoleon III. The political change did more than serve Vuitton well with an appointment to supply the empress, it practically created a whole new list of clients and the ability to work on his own. Two years later, and 17 years after Vuitton started working in Monsieur Maréchal's workshop, he opened his own workshop at 4 Rue Neuve-des-Capucines near the Place Vendome.

It was a new life for the 33 year old Vuitton. Shortly before opening his own business he married 17-year-old Clemence-Emilie Parriaux in April 1854. He hung a sign outside his store that stated: "Securely packs the most fragile objects. Specializing in packing fashions." It was a mission statement as well as a marketing slogan.

Vuitton was innovative and introduced a series of "firsts" that helped further solidify his reputation as Paris' top trunk-maker. One surprising innovation was the rectangular trunk. What today we take for granted was a novelty at the time because trunks had previously adorned a dome top. The odd shape was fashionable, but not very practical. Vuitton's rectangular trunk allowed them to be stacked, which meant they were more stable during transportation and therefore less prone to fall and become damaged.

He introduced a new line of trunks that were not only rectangular, but also covered with gray canvas. This was an abrupt departure from the common leather covers. The canvas was lighter, durable, and did not suffer from other problems leather trunks suffered from, such as accumulated smell or the need for regular oiling. The new line, as well as other designs, propelled Vuitton's business to great success. The number of orders increased, and the geographical reach of his clientele expanded as far as Russia and Egypt, which required manufacturing to expand.

With a new and larger workshop in the village of Asnieres, and a growing list of clients, Vuitton's future looked bright. However, the war with Prussia that broke out in 1870 wreaked havoc on France. Paris fell under siege and soon afterwards a civil war erupted. No one had a mind for luxurious travel or spending money on new trunks. When hostilities subsided in early 1871, Vuitton found that his workshop in Asnieres was in shambles, just like the rest of the village.

Although his tools were stolen and the staff was gone, Vuitton decided to start over immediately. He quickly built a new shop at 1 Rue Scribe. The new location was a great choice. It had a high-end aura to it, next to a prestigious Jockey Club in the heart of the rebuilding of Paris. A year later, in 1972, Vuitton introduced a new line, one with his monogram printed on a beige material. In addition to the print was a red stripe that would become a signature of the brand for centuries to come.

Another important innovation, one especially close to the heart of his clients, was the unpickable lock. Together with his son George, he revolutionized luggage locks by creating a lock system with two spring buckles. Each lock had a unique and numbered key. The internal lock patterns were kept at Vuitton's workrooms and registered with the owners name in case another key was needed.

Vuitton may have simply been a successful carpenter in the eyes of some, but he understood the importance of style, quality, innovation, and a recognizable stamp. He set the foundation for a brand that would last far beyond his and his children's lifetime.

Louis Vuitton died February 27, 1892, at 70 years old. His son George successfully continued the business, expanding it to other luxury items. In 1987, the company merged with champagne and cognac makers Moët et Chandon and Hennessy to create a leading luxury group. In 2017 the company sold €3.8 billion worth of jewelry and watches.
Tweet
How Can A Diamond Be Yellow?
Barnett Helzberg: Using marketing to make a diamon...

More posts from author
Tuesday, 12 October 2021 Diamond Manicure The Most Creative (and Outrageous) Products Made with Diamonds - Manicure
Tuesday, 05 October 2021 5 Tips to Take Better Care Of Your Diamonds
Tuesday, 14 September 2021 Did Anyone Say Diamond Dinner?