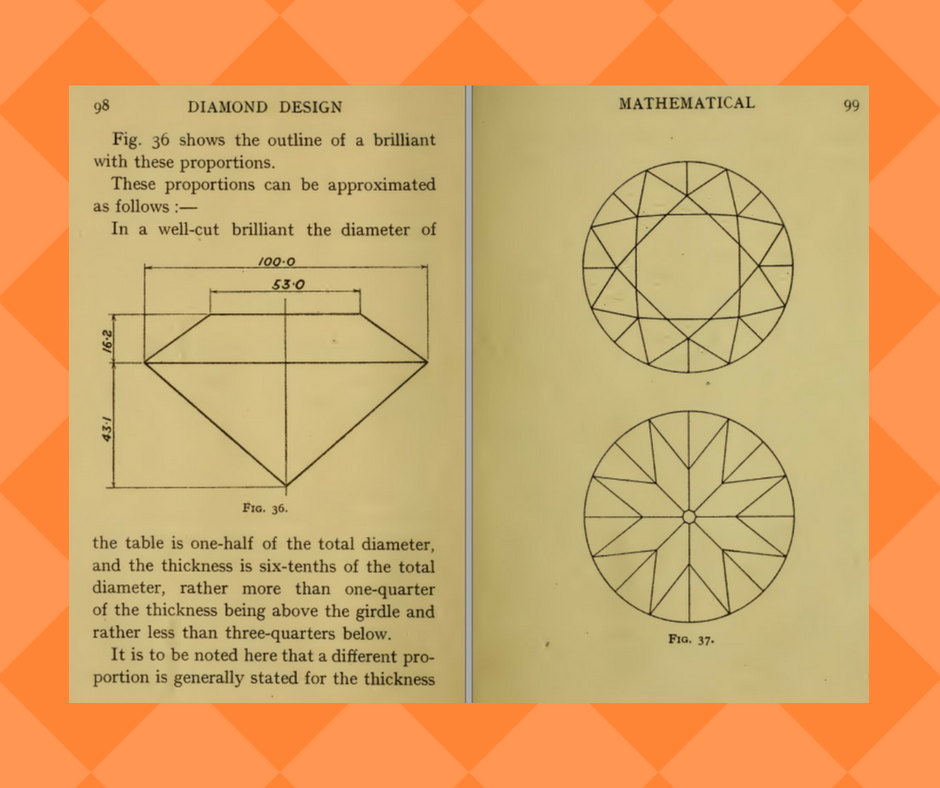 Although diamonds have a natural beauty, Marcel is the man who figured out how to get the most light to shine out of a diamond, calculating how to maximize light return.

Marcel Tolkowsky had learned how to cut diamonds by the time he was nine years old. Part of a great diamond dynasty, his grandfather Abraham Tolkowsky was a diamond and precious gem cutter and dealer that served and supplied European nobility with diamonds starting in the mid-1800s. Abraham emigrated from Bialystok, Poland to Antwerp to work in the local diamond center. Two of Abraham's nine children, Samuel and Maurice, would establish themselves as professional diamond cutters and eventually carry on the family's growing legacy. However, it was his son Isadore who fathered the man who would transform diamond polishing forever.

It was born out of an important family legacy of innovation. Marcel's grandfather Abraham always stressed the importance of the technical side of their trade, and insisted on continued skill development. Marcel's uncle Maurice invented the earliest diamond bruting machine. This machine would allow the development of many new diamond shapes that had never been seen before and would also significantly reduce the amount of time needed to complete polishing a rough diamond, while improving rough yields. This last quality was of great importance because by enabling bigger diamonds to be polished from the original rough, the resulting polished diamond would sell for more, improving the return on the cost of the rough stone.

These lessons were passed on, and Marcel, a brilliant young man, soaked it all in. Yet his first inclination was to go to university and get a formal education. It is possible that Marcel was less inclined to join the family business or maybe he was more curious about math and felt that it was his calling. We don't do not know the answer to this, but we do know that although he worked in the family polishing workshop from a very early age, he decide to study mathematics at the University of London and pursue an academic career.

Marcel completed his first two degrees and decide to continue his studies and earn a PhD. His focus was mathematics, and he decided to write his dissertation on light refraction in diamonds. The idea was to employ a mathematical view on diamond polishing, combining the two fields in which he was very knowledgeable and apparently passionate about, and backed by his grandfather's and uncle's pursuit to improve the technical side of diamond polishing. Marcel studied rough diamonds from a new angle, cut diamonds, recut diamonds, and measured the light reflection from the different resulting polished diamonds. He considered the crystal structure of diamonds, looked for patterns and eventually succeeded in his quest.

What made this study so extraordinary was that in the many years that diamonds were cut, this was the first scholarly deep-dive into this properties of diamonds with a practical application. Marcel was not oblivious to this at all. In fact, he was very aware of the importance of the work he had done. "It is a remarkable fact that, although the art of cutting a diamond has been known for more than two thousand years, it is entirely empirical, and that, though many keen contemporary minds have been directed upon the diamond, and the list of books written on that subject increases rapidly, yet nowhere can one find any mathematical work determining the best shape for that gem," he wrote in the book's introduction, adding, "The present volume's chief aim is the calculation of that shape."

The book concludes with two tables of recommended angles to use in the different parts of the diamond, including what amount of light to expect shining out of the diamond, complete with light measuring values, compared to those commonly used at the time. He concluded the book stating, "We may thus say that in the present-day well-cut brilliant, perfection is practically reached: the high-class brilliant is cut as near the theoretic values as is possible in practice, and gives a magnificent brilliancy to the diamond."

Tolkowsky was confident that he found a near perfect cut. The book ends with the following passage: "That some new shape will be evolved which will cause even greater fire and life than the brilliant is, of course, always possible, but it appears very doubtful, and it seems likely that the brilliant will be supreme for, at any rate, a long time yet." He was right. Nearly one hundred years later, and his 58-facet round brilliant-shaped diamond proportions are still used to this day. Some created a few variations to it, a few even modified it a little to improve on the light return properties, but no one radically transformed diamond polishing proportions in the way he did with this seminal research.

Marcel returned to Antwerp and kept the family polishing tradition up until World War II, when it became dangerous for Jews to live in Nazi-occupied Belgium. In 1940, he arrived in the US and started over. He opened a polishing facility, helped out his cousin Lazar Kaplan, became a respected dealer in New York City's diamond industry, and maintained an active career as a master polisher and diamond designer.

Tolkowsky also took on leadership roles in the local diamond industry, serving as chairman of the Diamond Dealers Club's arbitration board. Marcel retired in 1975 and died in Manhattan on February 10, 1991 at age 92. He left behind him an important legacy of striving to improve, continuing his family's heritage of elevating quality for the betterment of all.