The limited success of the trade show in Hong Kong brought price increases to a halt yet did not harm demand. The global polished diamond market saw steadily growing demand, expanding into additional diamond color and clarity ranges. A few issues that the market is currently facing are set to loom over the global diamond industry. They include the possible impact of a trade war between the US and China on American consumer behavior, the investigations into the alleged fraud case in India, and the decision by Signet to revise its strategy – including its relations with its vendors, on the back of their poor results in the past year.

Despite their high expectations, American polished diamond dealers and wholesalers were disappointed by the results of the Hong Kong International Diamond, Gem and Pearl Show that concluded in early March. However, in the US, demand not only continued during March, it even expanded to more items, signaling a positive US market and continued expectations by US specialty jewelry retailers that consumers have more interest in diamond jewelry than they did prior to the 2017 holiday season.

Along those lines, on March 16, Tiffany & Co. announced growth in its US sales in the fourth quarter, driven by increased demand from local customers. Historically, Tiffany’s US sales are mainly driven by tourists. Same store sales in the Americas rose 4% during the fourth quarter. Global same store sales were up 3%, and net sales were up 9% to $1.3 billion. For the fiscal year ending January 31, 2018, global sales increased 4%.

This positive trend comes with the disappointing news that Signet’s sales fell over the past year. In March, Signet announced that same store sales had fallen 5.3% during the year and 5.2% in the fourth quarter. The decline in sales was expected after the company announced declining sales in previous quarters, as it had following the 2018 holiday season.

Total sales for the quarter were $2.3 billion, up 1% year-over-year. The small rise was mainly thanks to the acquisition of R2Net, the parent company of online diamond retailer James Allen, which posted a 35% increase in sales.

Demand for round polished diamonds improved in the US wholesale market for a wide range of sizes, from 0.90-carats and all the way up to 4-carat rounds. The improved demand was focused on 1, 1.50 and 2 carats in typical American color and clarity ranges: H-I colors, and VS-SI clarities. Retailers also have strong demand for smaller goods, however many dealers, especially those representing Indian firms, are reportedly holding back. The big question is why and for how long.

There is an increase in demand for marquee-shaped diamonds, which is something new for the US market, and good quality marquees weighing 2 and 3 carats are selling “nicely,” according to traders. There is also steady demand for fine-quality oval polished diamonds. Demand for pear-shaped and radiants dropped over the course of the month.

The Indian diamond industry is suffering from the effects of the alleged fraud case of Nirav Modi and his uncle Mahul Choksi. The immediate impact is a reassessment by local banks of the nature of their dealings with the Indian diamond industry. More importantly, the questions that the Indian investigation authorities are posing to banks are seeking to discover possible corruption of bank managers at all levels.

There is growing concern that the case is just starting to unravel and may lead to discovery of additional cases of a similar nature. Of greater impact is the possible change in bank policies regarding credit facilities, which will impact a large number of companies and harm companies that depend on heavy financial leverage. Traders already feel that the banks have become much stricter in their dealings with them. As it is, most banks lending to the Indian diamond industry have begun trying to reduce their exposure and are demanding from at least some clients to increase collateral to continue receiving credit. To protect themselves, diamond companies have formed a consortium to ensure banks do not pull the plug on the market and have started holding talks with the banks.

For now, it is clear that some things will change. Transparency will have to improve, for example. Also, banks have not yet actively reduced credit, so a liquidity crunch has not hit the market yet.

Polished diamond trading in the market remains quite strong currently in terms of prices despite the softening demand. Indian diamond manufacturers are holding their prices, saying that they cannot reduce prices, because the cost of rough diamonds was high. In response, clients are limiting their purchases to buying limited amounts on an as-need basis. Everybody is expecting a correction, but it has not come yet.

Like their counterparts in other centers, Israeli traders also had high expectations from the Hong Kong Show. They, too, returned home with the conclusion that it was a mediocre show that did not meet their expectations. Either way, the show set the tone for the Israeli diamond center for the entire month.

Israeli traders felt that the Hong Kong show was a sellers’ market as far as those dealing in smaller goods were concerned. Rounds weighing 0.30-0.39 carats and 0.40-0.49 carat goods in all colors, mainly in VS-SI clarities were in strong demand by Israeli traders, and prices of these goods were firmed up. Demand was also noted for quarter carats as well as for 1/6 carats. The areas where demand was most marked was where there were clear shortages, which also impacted prices.

Demand at the Israel Diamond Exchange was noted for one-carat rounds in a wide range of colors, from collection goods (D-G colors, in SI+ clarities) in triple excellent makes to cape-colored goods.

Price hikes in the Indian diamond market, especially for high-quality makes, made the mid-quality makes that the Israeli traders offer more attractive. The price increases also made other goods, which were held in stocks for a while, attractive to price-conscious buyers.

Traders provided mixed information about high cost items, namely those that sell for $100,000 and above. Some said the market was quiet, while others reported active business. There was somewhat less demand for fancy color yellow diamonds, however their prices are steady. As in many other diamond trading centers, trading levels have somewhat quieted in the second half of the month.

The Hong Kong International Diamond, Gem and Pearl Show that was held February 27- March 5 was the first major diamond and jewelry trade show held this year. The show was expected to continue the rising demand in the wholesale polished diamond market that started in late December 2017. Polished diamond traders were disappointed with the levels of demand. Not surprisingly, traders who came prepared, had a marketing plan in place in advance, arranged meetings ahead of the show, and had a good understanding of what buyers would be interested in, had a better show than those who did not do their homework. Overall, prices firmed up by about 2%, despite demand by buyers, which was lower than expected.

The Hong Kong market itself was characterized by local traders as stable. Shortages are reported for round, one-carat diamonds in D-E colors, SI clarity and nice quality makes. These goods are currently experiencing rising demand in the Hong Kong market. Demand is also seen for rounds D-G colors, VS-SI clarities in 0.30-0.80, size ranges and for 1-3 carats.

In Mainland China, the polished diamond market is doing much better than in Hong Kong. Traders are reporting good demand in thirds, half carats, and one-carat rounds in GHI colors, VS-SI clarities. Small fancy shape marquee, pear and oval-shaped goods, weighing 0.15-0.50 carat in FGH colors and VS clarities are selling well. Fancy color diamonds are also in good demand in China.

After an extended period of declining watch sales around the world, in the past month it became clear that consumer interest is suddenly back. Swatch reported that net global watch and jewelry sales were up 5.4% to CHF 7.7 billion. Although most of the growth was for lower and mid-cost watch brands, which do not typically include diamonds, the improved sales for the entire category, as well as renewed consumer interest in watches is good news for the diamond industry on two levels. Improved sales of higher-end goods mean increased demand for diamonds from the watch industry. Watches are also an important category for specialty jewelry retailers. 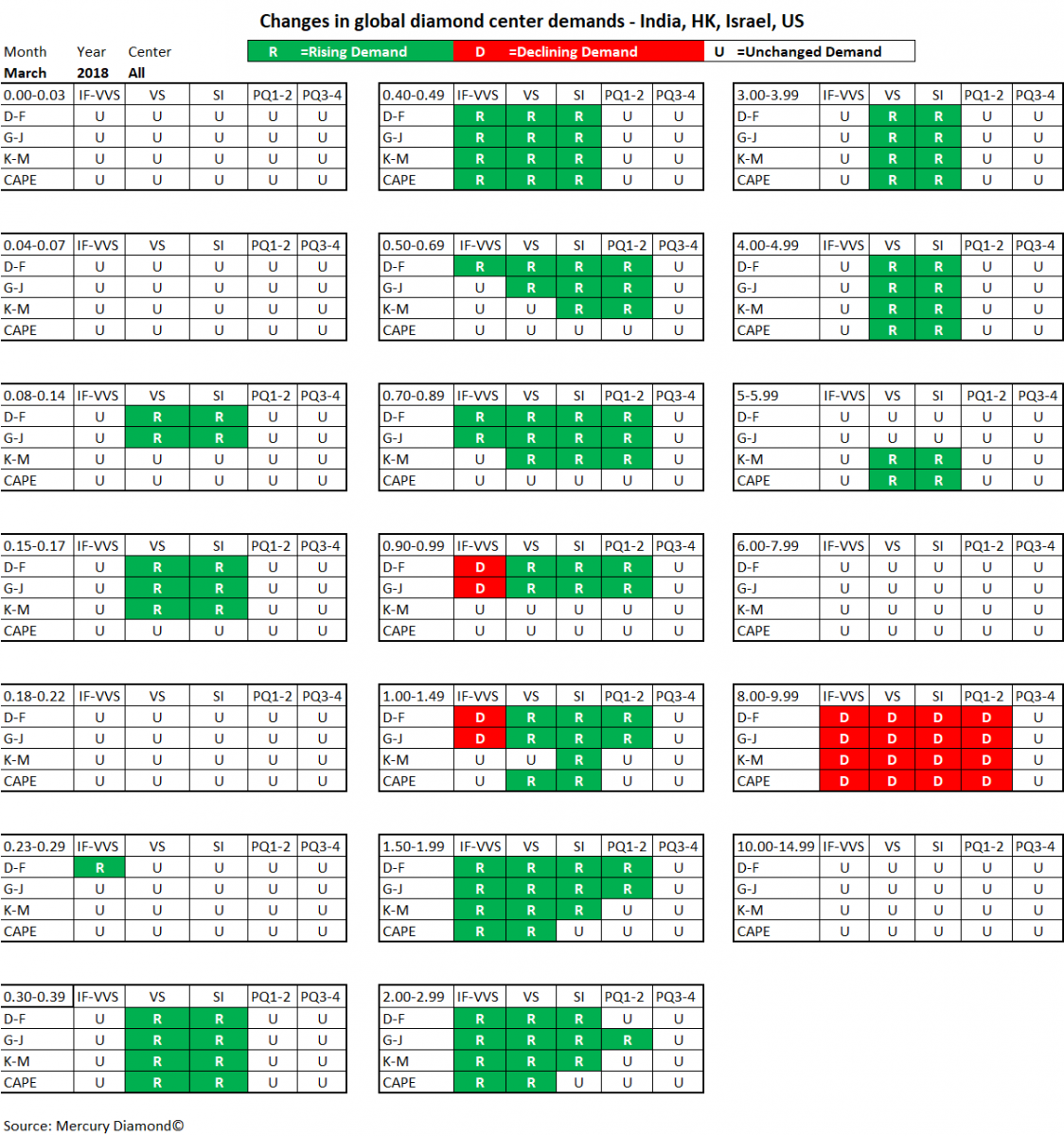 Diamond Portraits: Erasmus Stephanus Jacobs
The How and Why of Third Carat Price Increases