Prices of polished diamonds were mixed in June, reflecting a combination of clashing trends. On the one hand, there was good demand for many diamond categories since the JCK Las Vegas trade show, shortages, and rising rough diamond prices. On the other hand, quite a few diamond categories were in lower demand, and traders in the diamond trading centers are already in “summer mode”, seeking to decrease inventories and close as many transactions as possible before the summer vacations.

The Mercury Diamond Global Tracker™ (MDGT™) averaged 114.11 in June 2018, a 0.7% decline compared to May. Year-over-year, polished diamond prices are still falling behind, down 1.9% compared to June 2017. The Mercury Index has fluctuated in the first six months of the year. Prices were up in January and February, declined in March and then rose again in April and May, before the recent mixed activity in June.

Prior to that, the Mercury Index has been mainly declining for several years. Polished diamond prices peaked in April 2014, when the index reached 142.3. Since July 2014, the index exhibited a steady decline with a few notable respites in the 45-month period.

At the beginning of June several trade shows took place in Las Vegas. Trade shows in Las Vegas, among them the world’s largest jewelry fair, JCK Las Vegas, which took place on June 1-5. The other major jewelry and jewelry-related trade fairs that took place during the same time were Couture, Luxury, and AGTA. Collectively, they had a large impact on the diamond industry this past month.

A wide range of goods were in demand at the shows, mainly typical American consumer-market goods, with some additional items as well. In terms of size, diamonds smaller than half a carat and up to 2-carats sold well. A clear demand for diamonds weighing 3 and 5-carats was evident as well, and a number of important stones weighing 10 to 40-carats were sold during the show. While VS-SI clarity goods were very popular, traders reported a serious shortage of SI clarity diamonds in all sizes, an ongoing issue.  These demands drove market price.

Another trade show, which took place in Hong Kong right after the US trade shows, showed a few additional trends in the market. One of the most sought after item at the show were thirds (0.30-0.39-carats) in mid-color ranges and VS-SI clarities. Another strong item were half-carats. Larger goods, weighing 1-2-carats in lower colors were also in demand. These demands – in Las Vegas and Hong Kong – supported rising prices together with rising rough diamond prices.

Conversely, smaller goods weighing 0.25-carats and below, were in very limited demand at the Hong Kong trade show and thirds were in declining demand in at the JCK Las Vegas trade show following runaway prices. These trends also impacted prices during the month. As noted here last two weeks ago, not only a seasonal trend is at play here. The consumer market continues to do fairly well, responding to lower prices compared to the much higher prices in the past few years. This is the important trend to pay attention to, as it reflects a departure from the downward trend of the past few years. With six months of mostly rising prices, this is an indication that consumers have warmed up to diamond jewelry again. This change is most notable in the US, where the weakness was most pronounced. In addition, good demand from the Chinese consumer market adds to the backwind from which prices are currently benefitting.

Although the trend of year-over-year price declines started 43 months ago, the deep declines of 2015 are behind us for now. The declines have since tapered down, mainly in 2016, and continuing into mid-2017. However, in September and October 2017, we saw the gap expand from 0.5-1% to about 2.7%, which has now narrowed to less than 2%.

On a month-over-month basis, the price index made an unusual decline. The last time the index dipped so far was in August 2017, nearly a year ago, when it fell 1%. Month-over-month price declines during the summer months are not unusual. Trading levels tend to be slow, demand is limited, traders are largely on vacation, and often they prefer to quickly agree to reduced-price transactions to generate larger cash flow.

Prices Down for Most Key Diamond Size Ranges

The MDGT™ index is composed of the price performance of many different diamonds, of many different size ranges, from 1 carat and above. In June, prices of round diamonds weighing 0.30-0.39 carats (thirds) declined for a second month in a row, this month by 0.9%, following five months of consecutive monthly price increases. The price increases were driven by a year-long preference for smaller goods, mainly in the US consumer market, even in mid-range and higher priced jewelry items. During this five-month period, prices increased on average by 7.9%. The decline in May possibly reflects a response to this strong price hike. 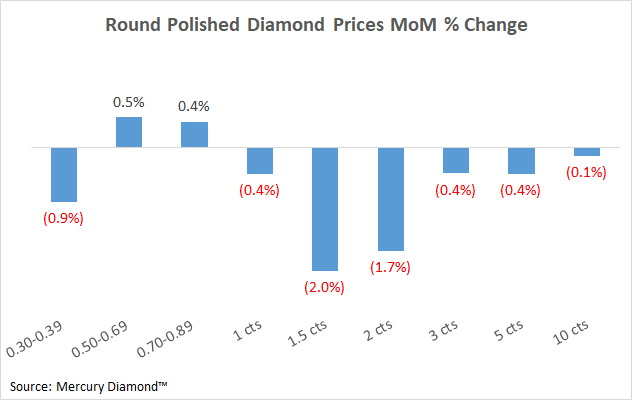 Other smaller goods, half carats and two thirds (0.70-0.89-carats) were up by about half a percent. Larger goods, one-carat and above, declined. The most notable price decrease was seen for 1.5-carat goods, falling 2% in June compared to May. Prices of 2-carat rounds followed with a 1.7% price decrease, while prices of larger round polished diamonds declined modestly.

It is interesting to note that within each size range, price behavior showed very specific trends. Among the larger goods, 1-carat up to three carats, the top color and clarity items, although suffering from price declines, these declines were more moderate, while lower color and clarities were generally the weaker performers. For goods weighing 4-carats and more, the trend was less clear.

Among smaller goods, the trend was largely reversed. The better goods suffered from dipping prices while the lower color and clarity goods have seen price increases in June compared to May. 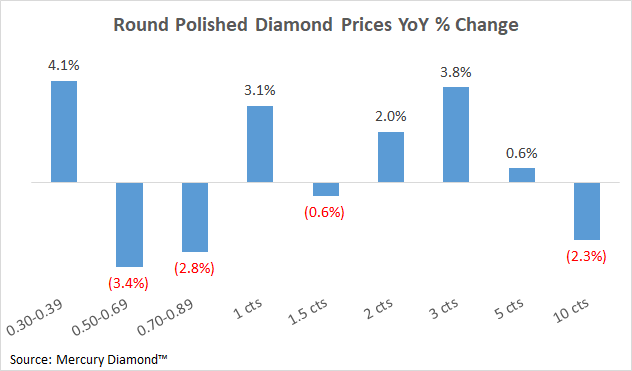 On a year-over-year basis, price behavior was mixed as well, even very mixed. This is reflecting long-term market changes, some of them throwing off even long-lasting seasonal changes.

We are witnessing a market undergoing major changes. It is impacted by deep changes in consumer demand, jewelry design trends, polished diamond shortages, rough diamond prices, the creation and disappearance of specific market demands, uneven changes in inventory levels, and even the presence of lab-grown goods in the retail sphere. The overall decline in prices that ran since mid-2011 is over. Now we are in a period of continuous price adjustments. It may look chaotic, but it is far better than the constant price declines and eroding viability. 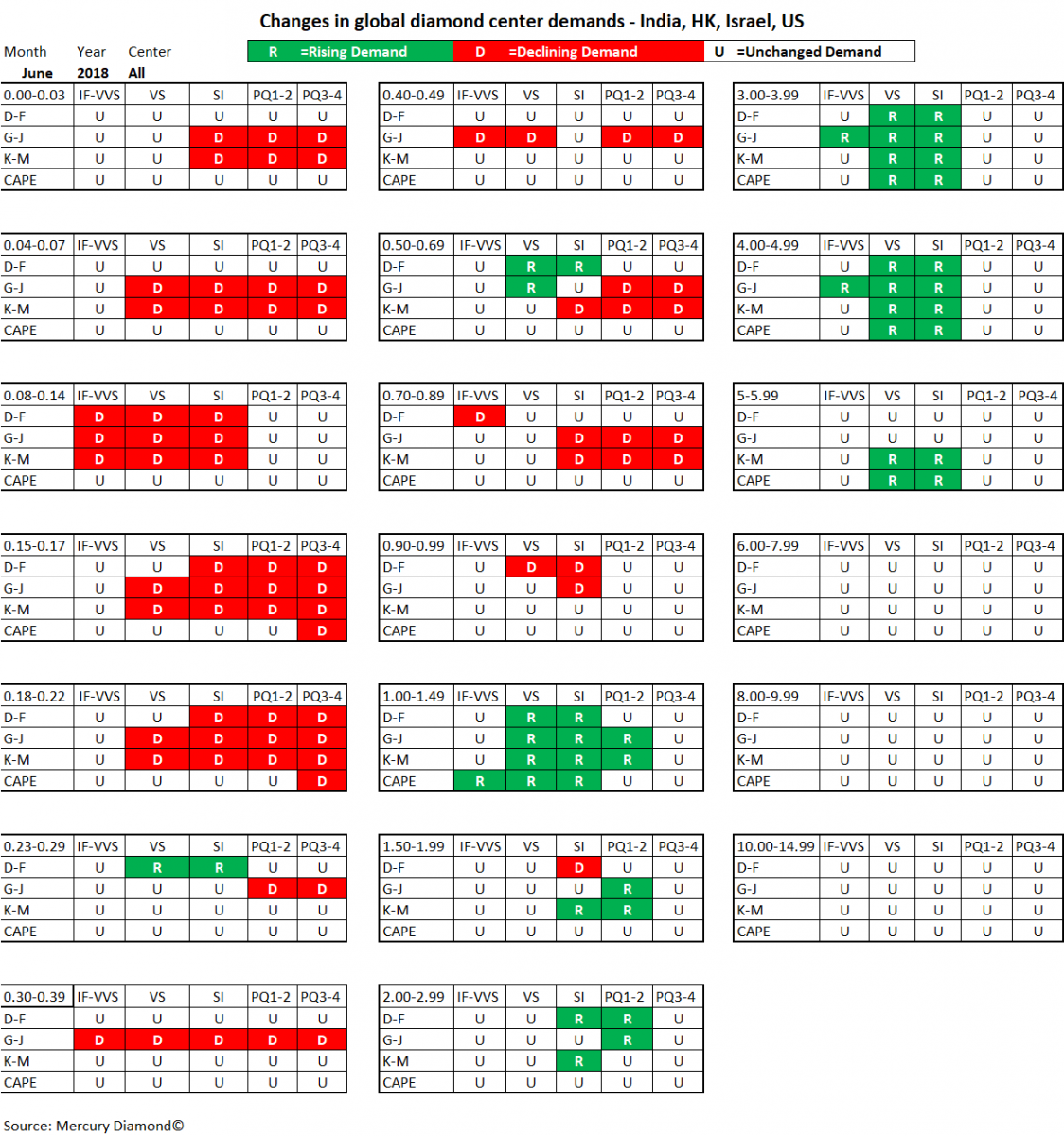