During the 32-month period, the index declined 11.9%, underscoring the continued softness of the polished diamond market. On a month-over-month basis, prices declined 0.3% during the month of July compared to June.

It is too early to determine whether this is a change in the recent trend. Most of the trading centers took their summer vacations during July. As we published in the last two weeks, the level of demand across major trading centers is relatively low, while inventory is piling up. These trends support this price softening.

All Sizes are not "Dazzling"

The overall price trend is downwards, and no size showed any signs of recovery. Generally, rounds smaller than 1 carat in colors D-M, clarities IF-SI2 showed a deeper decline than larger size rounds during the month of July. For sizes smaller than one carat, this is the opposite trend to the one we saw during June.

Prices of one-carat diamonds fell 0.8 percent during the month, a slower rate of decline than the 1.5% price drop they experienced during June. 1.5-carat rounds suffered the most extreme decline in price, sinking by 2.8%. The price decline in larger goods has also impacted 5 caraters, for which buyers paid 1% less during June. 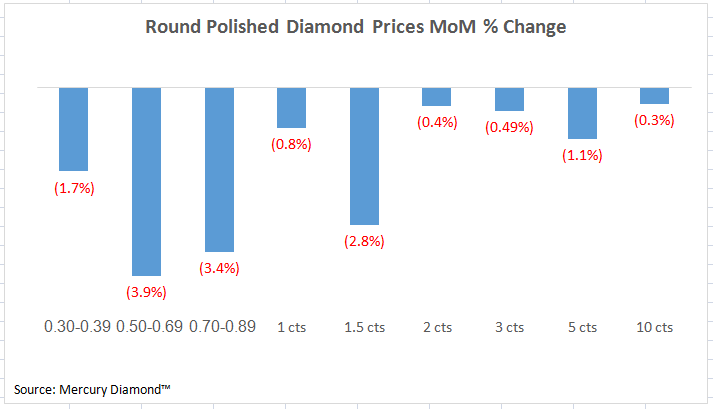 The year-over-year overall decline in prices is comprised of smaller components, namely the individual performance of a wide range of goods. It is therefore no surprise that on a year-over-year basis, every size range declined in price, many in the mid-single digits. The most notable price declines were halves, three quarters, 1, 1.5, 3, and 5 carats, whose year-over-year price decline is 5% or more. 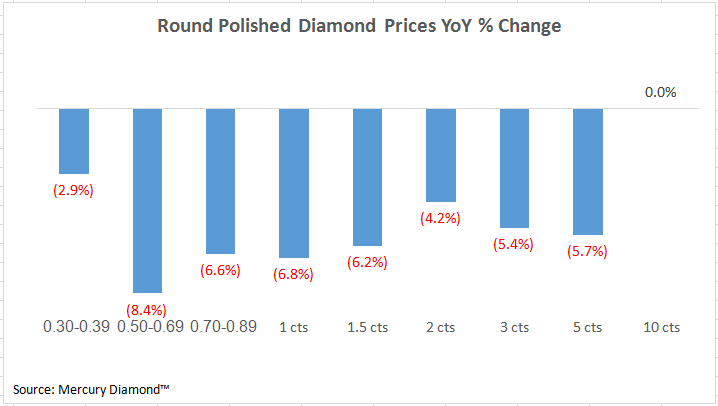 The long-term overall weakness in polished diamond prices is an ongoing issue, and despite our cautious optimism expressed earlier this year, the price outcome in June and July paints a negative and gloomy picture of the market. Even after taking the "quiet season" into consideration, this ongoing trend should concern us all.

The ongoing decline in prices, and the decline in consumer demand that it reflects, is not a one-way street. For some time, we have been urging the diamond industry to invest in marketing in order to drive consumer demand. Expanding our focus from a single channel to a dual channel may have a positive impact as well. To date, diamonds have been promoted as a symbol of love, set in jewelry. We are urging the diamond community to add a second channel, that of polished diamonds as an asset with the potential of appreciation. Adding this additional venue, where diamonds are traded openly, transparently, and with full and wide disclosure, has the potential to improve our cash flow, and to expand both the number of polished diamond buyers and the frequency of trading.

Support Services: Sorting and Sales
Rough Supply Up, Polished Sales Down, and Stockpil...