Polished diamond prices remained flat overall in October for the third consecutive month, according to the Mercury Diamond Global Tracker™ (MDGT™) , an index of polished diamond transaction prices. The steady prices, following an extended period of price declines, are a welcome sign of stability for the global diamond industry.

In October, polished diamond prices declined by 2.7% year-over-year, the same as in September. Although we have seen stability in prices in the last three months, the year-over-year rate of decline shows just how deeply prices fell during the past year before stabilizing. In recent months, overall polished diamond prices have been declining at a growing rate on a year-over-year basis. This trend started in June, and prices have been declining at a faster rate every month since then, as the following graph shows. Prior to June, the rate of price declines since April moderated, and averaged just 0.5% on a monthly basis. Since June, the year-over-year rate of decline increased to 0.6%, and then to 0.8% in July, 1.7% in August, and a worrying 2.7% in September.

Based on our research, the easing in polished diamond price declines stems from a decline in inventory levels  after an extended period of oversupply of goods, as jewelry manufacturers increased work ahead of the November-December holiday. This was coupled with better-than-expected demand at the Hong Kong trade fair. In addition, the Indian diamond sector was largely away for the Diwali holiday, during which factories were closed, further drying supply.

Historically, polished diamond prices are little changed in October from September, and tend to rise in November as demand from retailers rises with the holiday season. This cyclical behavior peaks in December, when prices of polished diamonds rise. The level of polished price increases in December is proportionate to the robustness of consumer demand for diamond jewelry. That said, prices should have been stronger in October. That they weren’t is an indication that retailers are somewhat cautious at this point. 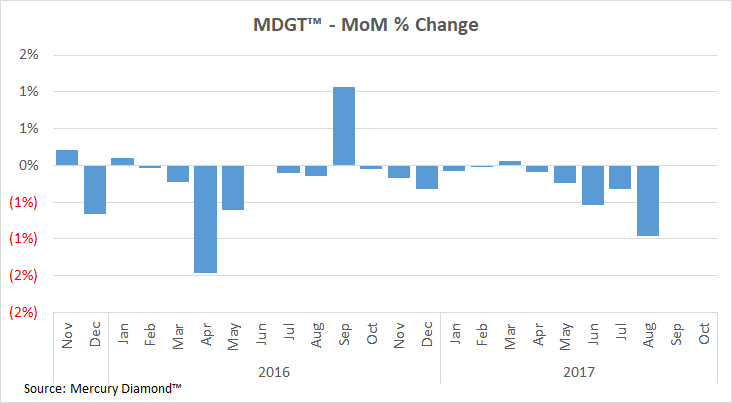 The MDGT™ index is composed of the price performances of many different diamonds, of many different size ranges. During October, prices of rounds weighing two carats and below declined by 0.3% to as much as 4.9%, as shown in the following graph. On average, the price of these goods fell by 2%. For thirds (0.30-0.39 carat), the decline was a change from the recent increase in prices. Other items have declined for a while despite some increases in September.

Large round polished diamonds weighing three carats and above did well during October against rising demand. These goods are bread-and-butter items, which makes the declines disquieting. After all, demand from retailers should have been good enough to help maintain prices. The strongest rise was for 3-carats, which rose 1.2% during the month. 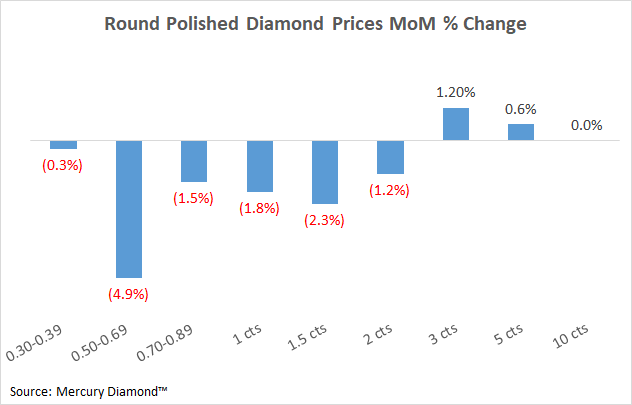 As in September, on a year-over-year basis every size range declined in price, most in the high to mid-single digits. The most notable price declines were for halves, down 16.1% year-over-year, and 0.70-0.89- carat rounds, which fell 13%. The price of 1-carat rounds fell nearly 10%. 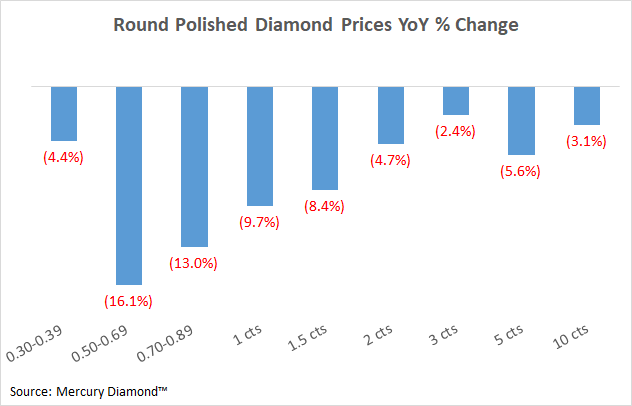 As stated last month, the continued long-term weakness in polished diamond prices is an ongoing issue. The improved performance of several size ranges is good news, and the overall flat price performance is an indication that prices may have reached their bottom. The weakness of rounds from 0.30 carats to 2 carats, the heart of the business, is reason for concern. However, the real test is during the holiday season in November and December. The expectation is that prices will rise during the two last months of the year. If they don’t, that would be very harmful for the entire diamond pipeline.

We have developed a system that collects transaction prices from a wide range of manufacturers, traders and retailers. These many monthly transactions are augmented by constant research in the market, which backs, double checks, verifies and completes the transaction data. The system covers more than 18,000 polished diamond categories across the 4Cs, including polished diamonds weighing up to 30 carats with clarities ranging from Flawless to I3 in colors from D to P and in the various shapes .

The price list  provides a price for a top stone without any irregularities. There is a separate table of irregularities, which provides the necessary discount or premium to find the exact current price of any particular diamond.

Record-Breaking Diamond Prices Prove They are Asse...
Equity Investment: Do we Have What it Takes?