In February, prices of smaller goods, as well as one and two caraters improved, yet a few key sizes pulled back a little, according to the Mercury Diamond Global Tracker™ (MDGT™), an index of polished diamond transaction prices. The steady prices, following an extended period of price declines, are a welcome sign of stability for the global diamond industry.

The MDGT™ averaged 114.94 in February, up 0.08% from 114.85 in January. Prices began inching upward in late December, as demand from American consumers peaked ahead of Christmas. Prices continued to rise in January, as American retailers sought to replenish inventories and prepare for Valentine’s Day (February 14). At the same time, retailers in China also stocked up ahead of the Chinese New Year celebrated in February. In addition, high expectations from the trade fair in Hong Kong further buoyed prices.

The positive news follows an extended period of sinking polished diamond prices. Since May 2014, the index has mainly posted a series of very small monthly declines, some of them stretching over five consecutive months and at times as many as nine months in a row. Although mainly small month-over-month declines, the cumulative effect was meaningful, totaling 2.4% in the nine-month period of April-December 2017.

Since its peak in April 2014, the MDGT™ index has fallen 19.3%. In effect, polished diamond prices have eroded by nearly one fifth of their value.

In February, the index declined by 2.0% year-over-year, a continued deceleration compared to the 2.7% declines in September and October, the 2.6% decline in November, and the 2.4% in December. The year-over-year declines, although milder than those experienced in 2016 and 2015, are still worrying as a cumulative trend of ongoing sliding prices.

The change in price direction that started in December 2017 seems to have lost some steam in late February. Although the month largely ended with price increases, a relatively subdued trade fair in Hong Kong put a halt on price increases, and in many cases wholesale prices of polished diamonds started to soften during the last few days of the show. According to our latest indications, price decreases continued in early March.

Historically, polished diamond prices tend to hold strong and even increase in January as demand from retailers replenishing their store inventories drive prices at a time of shortages. Another trend is a decline in price after the show in Hong Kong. These two cyclical trends are sometimes impacted by unusual market behavior, mainly when demand differs from expectations. When consumer demand during the November-December holiday season is below expectations, prices tend to weaken in January. Similarly, if demand at the Hong Kong show exceeds expectations, prices tend to rise in March.

Despite the trends returning to “normal” – good consumer demand in December, shortages in the wholesale market and the edging down of year-over-year declines – the diamond industry is not yet in the clear. For that to happen, we need to have robust consumer demand throughout the year, and we are still waiting for that. 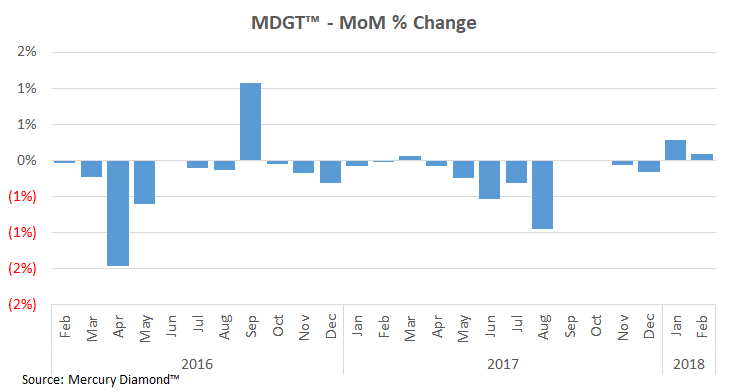 Prices Rise Across the Board

The MDGT™ index is composed of the price performance of many different diamonds, of many different size ranges, from 1 carat and above. In February, the smaller goods generally enjoyed higher price increases than larger goods. Compared to January, prices of many smaller round-shape diamonds increased considerably due to shortages in the market. Thirds (0.30-0.39-carat) rose by 3.6%, and half carats increased by 2.2%. Prices of 1-2-carat rounds posted strong increases: 1-carat rounds +1.9%, 1.5 +2.0% and 2-carats by 1.3%. Prices of large round-shaped goods demonstrated mixed price performance. Three-carat rounds declined 0.42% and 5-carats increased 0.5%, as did 10-carat rounds.

These changes in the price of rounds continued and strengthened the price trends in February, mainly for goods weighing 2 carats and less.

Despite the recent price increases, polished diamond prices have only partially caught up with their prices just a year ago. Thirds are by far the best performers, rising nearly 8% year-over-year. Half carats are 9% below their price a year ago. One carats are still lagging behind, and 1.5-3-carat rounds have inched up above their prices during February 2017.

Thirds and 3-carat rounds are the only two items that have posted an overall year-over-year price increase for the second consecutive month. With price increases expanding to a few other key sizes, this is a positive indicator. The challenge now is for prices to continue to rise or at the very least remain steady in the traditionally slower months of March and April. 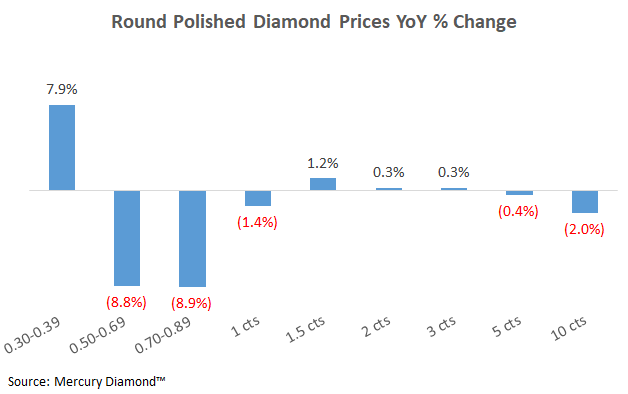 Following a period of over three years, polished diamond prices have started to inch upwards. This positive trend reflects consumer demand as well as availability in the market. We believe that the current retail prices reflect what consumers are willing to pay, explaining the rise in demand from retailers. If the diamond pipeline, from mining to jewelry making, can align itself to these new values, it could serve as a basis for rebuilding consumer interest in diamond jewelry and, with time, set it on a growth path. This may translate into a certain decline in prices in March to adjust prices back to their December or January levels.

We have developed a system that collects transaction prices from a wide range of manufacturers, traders and retailers. These many monthly transactions are augmented by constant market research, which backs, double checks, verifies and completes the transaction data. The system covers more than 18,000 polished diamond categories across the 4Cs, including polished diamonds weighing up to 30 carats with clarities ranging from Flawless to I3, in colors from D to P and in various shapes 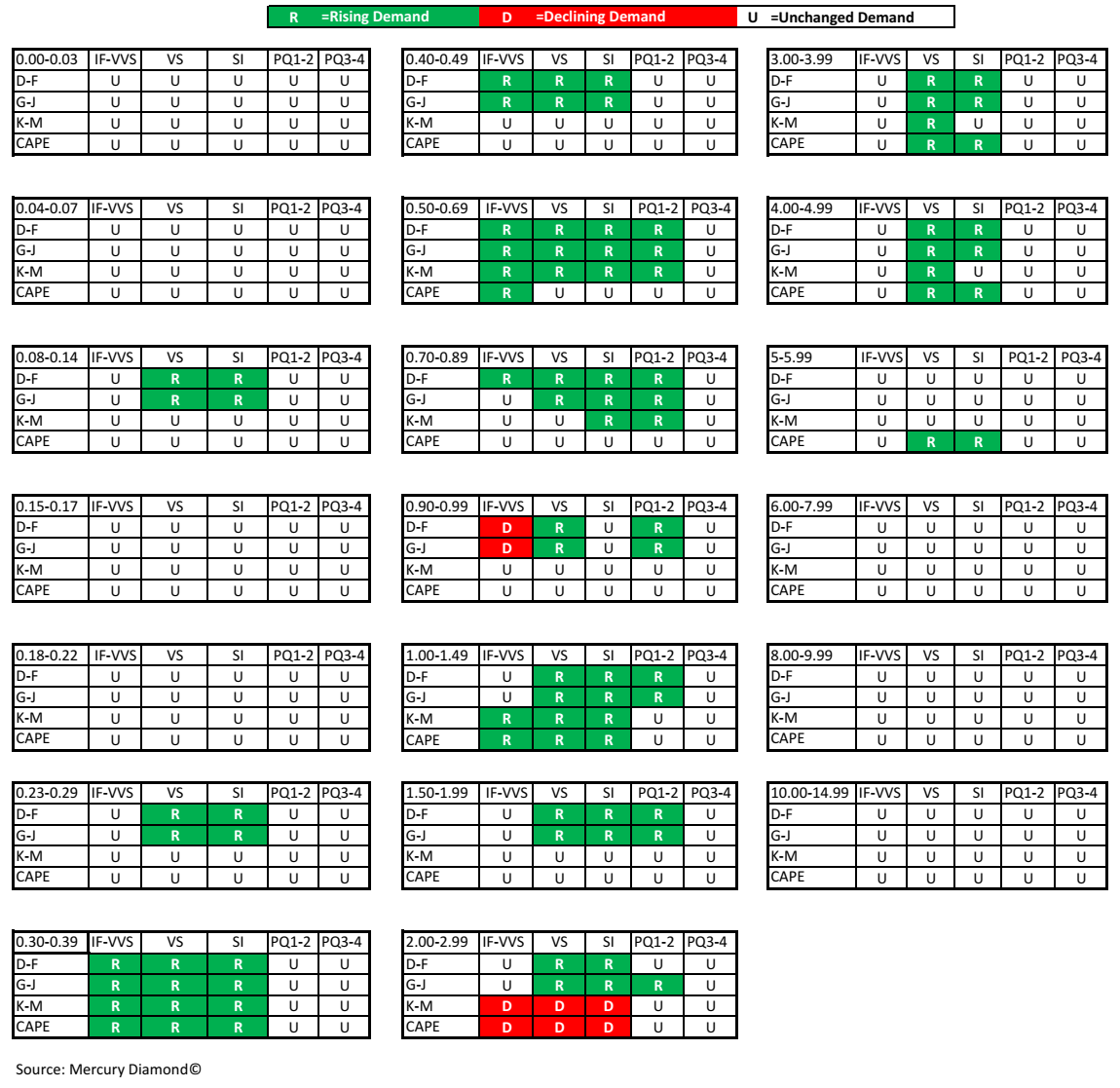