The summer months are here and with them polished diamond activity has slowed down. Demand from the retail and jewelry manufacturing sectors is down, and wholesale trading has decreased, leading in turn to a decline in wholesale polished diamondprices. The Mercury Diamond Global Tracker™ (MDGT™) averaged 113.81 in July 2018, which is a 0.3% decline compared to June.

Year-over-year polished diamond prices continue to fall, down 1.8% compared to July 2017. The Mercury Index has declined every July since 2011. In 2011, as well as in prior years, the index was flat in July as compared to June. There is a clear seasonal trend in these numbers.

MDGT™ fluctuated in the first six months of the year. Prices were up in January and February, declined in March, rose again in April and May, then hit the recent mixed activity in June, which was followed by a decline in July.

While the small decline in the index is seasonal, the rate of decline is part of a wider market trend. After several years of price declines, 2018 opened strong for the midstream of the diamond industry and prices improved through to May, except for a small decline in March. The price declines in June and July are viewed mainly as a typical summer trend, however, they may alternatively signal that the firming prices of the first half of the year are over. Namely the longer-term trend could be one of decline in prices, if viewed by consumers as too high. September prices will determine this possible explanation.

In June, the index declined by 1.8% each year. Since December 2014, the index has exhibited continued year-over-year declines.

Although the trend of year-over-year price declines started in December 2014, the steep declines of 2015 appear to have concluded, and the declines have since tapered off. This was exhibited mainly in 2016, and continuing into mid-2017. However, in September and October 2017, the gap expanded from 0.5-1% to about 2.7%, which has now narrowed to less than 2%. This level of 2% or less year over year declines remains steady since the start of 2018.

On a month-over-month basis, the price index has declined as expected, though much smaller than the unusual decline in June. Month-over-month price declines during the summer months are not unusual. Trading levels tend to be slow, demand is limited, traders are largely on vacation, and they often prefer to quickly close sales on reduced-price transactions to generate larger cash flow.

Prices Down for Most Key Diamond Size Ranges

The MDGT™ index is composed of the price performance of many different diamonds of many different size ranges, from 1 carat and above. In July, prices of round diamonds weighing 0.30-0.39 carats (thirds) continued to decline, down 1.2%, marking the third consecutive month of declines following five months of monthly price increases.

Half carats softened 0.7% in July compared to June, however the price of two thirds (0.70-0.89-carats) was up again, by 0.4%, rising for the fourth month in a row. Among larger goods, the price of 1-carat rounds (1.00-1.49-carats) also increased 0.4%, while the price of the rest of the lager goods declined. The most notable price decrease was seen for 2-carat goods, down 1% in July compared to June. Prices of 1.5-carats as well as other larger goods declined by about 0.7%. 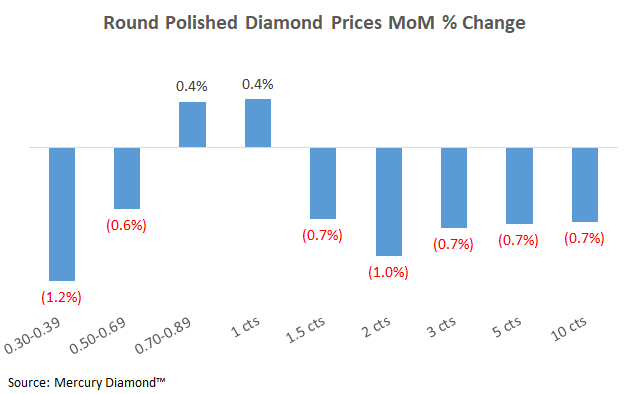 Another item that declined on a year-over-year basis is 10-carat goods. This is an unusual item, rare, and purchased by a very small group of buyers, so price fluctuations are in many ways distinct to those of more commonly sold items. 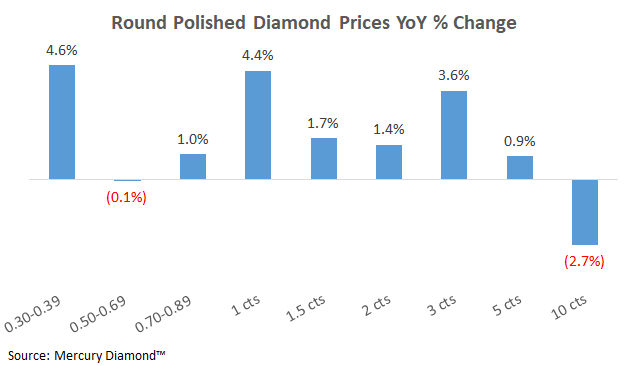 The global diamond market, like most businesses around the globe, is in a summer slumber. August is expected to perform along similar lines with a likely change happening in September.

We have developed a system that collects transaction prices from a wide range of manufacturers, traders and retailers. These many monthly transactions are augmented by constant market research which backs, double checks, verifies and completes the transaction data. The system covers more than 18,000 polished diamond categories across the 4Cs, including polished diamonds weighing up to 30 carats with clarities ranging from Flawless to I3, in colors from D to P and in various shapes. 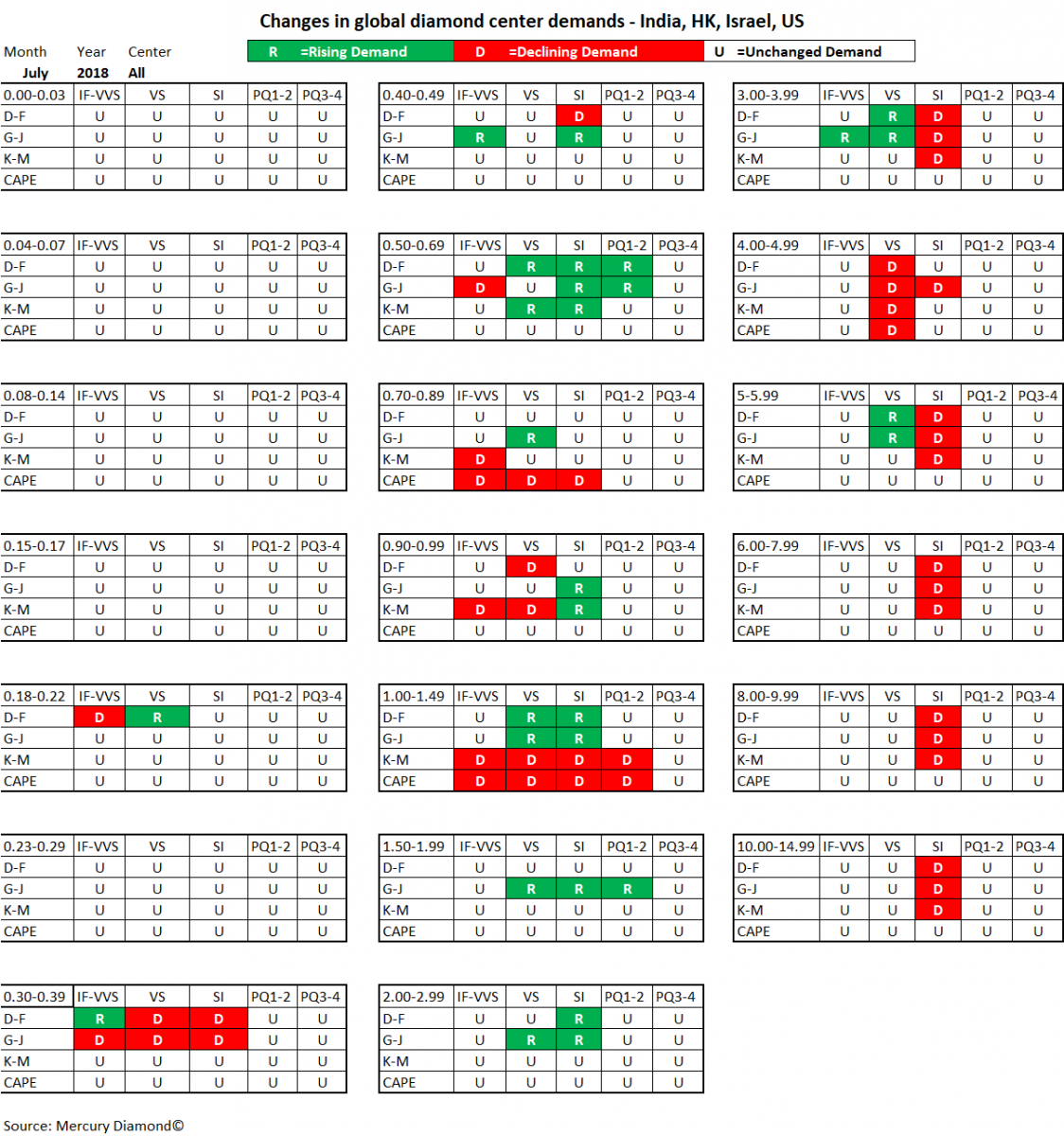