The year-over-year price easing during May, although small, reflected a long-term trend of overall small yet steady price declines. This trend started in December 2014, and has been running continuously since then. During the 30-month period, MDGT™ declined 11.2%, as demand in the main diamond consumer markets – mainly the US, China and India – softened. The majority of this lost demand was felt during 2015, mainly due to a sharp decline in demand from China.

Although polished diamond prices have been softening for a long period, in recent months the rate of decline has been easing on a year-over-year basis. This trend continued in May, providing an indication that prices may stabilize in the near-term, and may even begin to rise slowly. This expectation should be taken with caution. Although on a month-over-month basis MDGT™ rose several times during the past two years, most recently during March, the month-over-month decline in May is another decline in what is mostly a long string of declines. Although price changes seem more volatile on a month-over-month basis, this volatility is moderating. 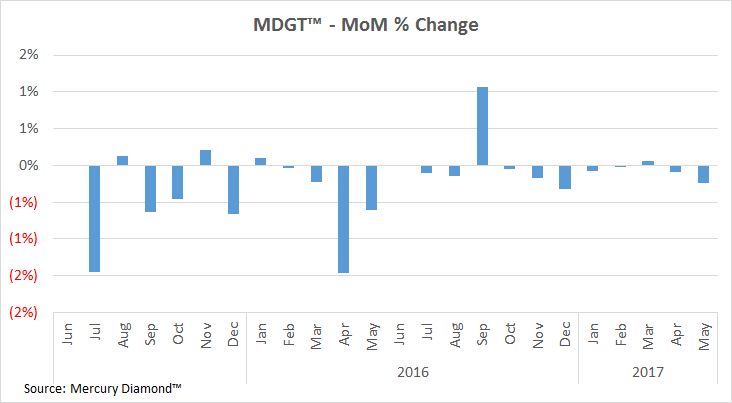 Round polished diamonds weighing half a carat (0.50-0.69 carats) colors D-M, clarities IF-SI2, fell 2.1% in a second month of large month-over-month declines.  Prices of rounds weighing 1.50-1.99 carats declined 2.2% in May compared to April. During the past year, prices of half-carat rounds declined by 5.1%, while the price of the 1.50 carat weight category is down 3.1%.

Another key size that suffered from a decline in prices was 0.70-0.89 carats, which fell, on average, by 1.3% in a single month. Together with one-carat rounds, these diamond categories are the backbone of global consumer demand, making long-term price declines a disturbing trend. During May, prices of one-carat rounds eased down 0.2%. However, their yearlong trend has also been downwards, declining 3.8% year-over-year. 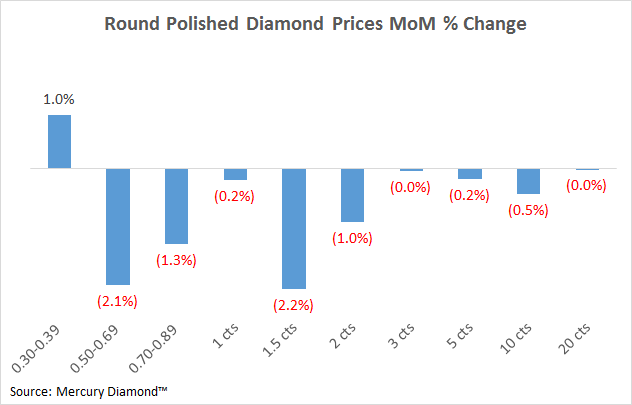 Two carat rounds, which posted handsome price increases of about 2% in April, slumped in May, declining 1% compared to April 2017. Two caraters are still priced far lower than a year ago, down 4.6% year-over-year. Larger-size goods, which tend to have less price volatility, maintained their prices from April to May. Year-over-year, all of the larger goods showed a smaller price decline, except 20 carats, which is up 1.3% year-over-year, after a very small price decline during the month.

The one size range that exhibited a rise in price month-over-month due to improving demand was thirds (0.30-0.39 carats). Their average prices increased 1% month-over-month. However, on a year-over-year basis, thirds are still down by 1.7%. 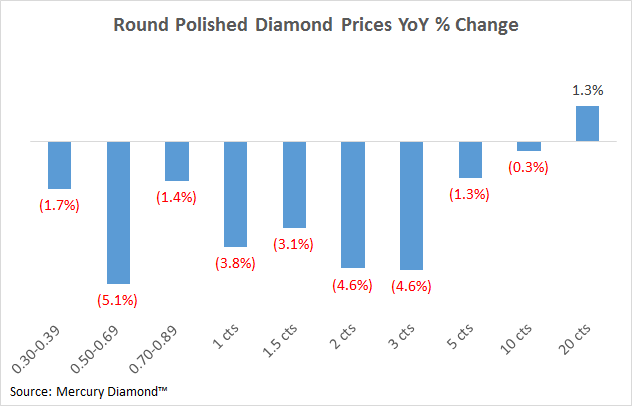 The long-term overall weakness in polished diamond prices has largely continued in May. Nearly every polished diamond size, shape and clarity, in all consumer markets, especially in the US, has suffered from this trend. While ebbs and flows are to be expected in every industry, our concern is that the trend of softening prices will continue in the future. We are especially concerned that the month-over-month declines during May were even deeper than those that took place during April. Traditionally, during the ramp up to the JCK Las Vegas show, polished diamond prices tend to rise as midstream companies round up goods prior to the show. The declines this year buck the trend, and further indicate the problems the diamond industry is facing in the consumer markets.

That said, price declines are not hard-set. For some time, we have been urging the diamond industry to invest in marketing in order to drive consumer demand. In addition, expanding our focus from a single channel to a dual channel may have a positive impact. To date, diamonds have been promoted as a symbol of love, set in jewelry. We are urging the diamond community to add a second channel, that of polished diamonds as an asset with the potential of appreciation. Adding this additional venue, where diamonds are traded openly, transparently, and with full and wide disclosure, has the potential to improve our cash flow, and to expand both the number of polished diamond buyers and the frequency of trading.