In September, polished diamond prices declined by 2.7%. The year-over-year rate of decline during September continues a disconcerting trend of increasing rates of decline. This trend started in June, and prices have been declining at a faster rate every month since then, as the following graph shows. The rate of price declines since April moderated, and averaged just 0.5% on a monthly basis. Since June, the year-over-year rate of decline increased to 0.6%, and then to 0.8% in July, 1.7% in August, and a worrying 2.7% in September. This trend indicates an ongoing issue in the diamond industry, which will likely mean an increased need to generate better cash flow.

Based on our research, the easing in polished diamond price declines stems from a decline in inventory levels after an extended period of oversupply of goods, as jewelry manufacturers increased work ahead of the November-December holiday. This was coupled with better-than-expected demand at the Hong Kong trade fair during the month, especially from Asian clients. In addition, the Indian diamond sector is entering the Diwali holiday period, during which factories are closed while the country goes on vacation.

The polished price decline trend started in June 2014, and has been running continuously since then. Overall polished diamond prices peaked in July 2011, and declined until October of that year. They recovered, and then declined again for a number of months, until June 2014. 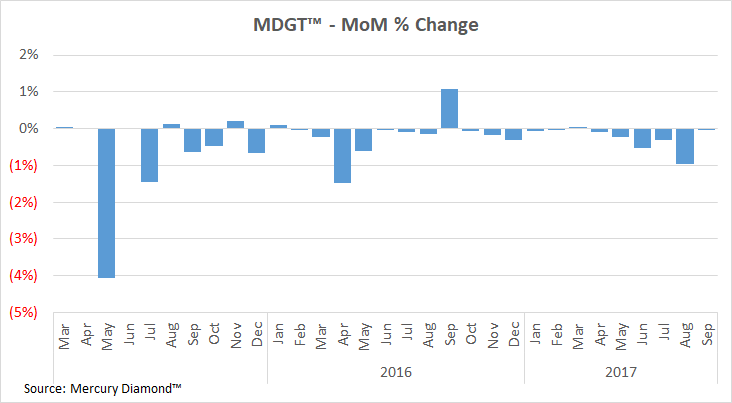 The MDGT™ index is composed of the price performances of many different diamonds, of many different size ranges. During the past few months, the prices of most size ranges were down, except one – thirds. Round diamonds weighing 0.30-0.39 carats increased in price every single month from April 2017, with a single dip during July, when their prices fell 1.7% on a month-over-month basis. On average, prices of thirds increased 0.7% every month from April, and rose overall by 2.4% during the six-month period.

A number of other size ranges have also seen improving prices, including one carats, which rose by 1.0% month-over-month, 1.5-carats, and two carats. Prices of two carats have increased by a dramatic 2.4% compared to August. The price increases are backed by jewelry manufacturers working on the items that will be offered at stores during the November-December holiday season, driving demand from wholesalers. We saw this demand starting for thirds, and now for bigger goods. 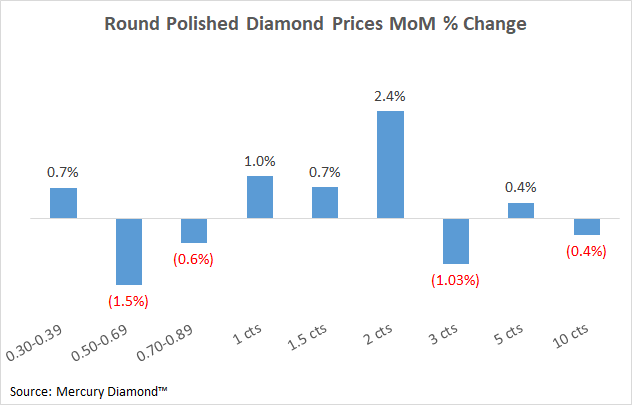 On a year-over-year basis, every size range declined in price, most in the mid-single digits. The most notable price declines continue to be halves, three quarters, 1, 1.50, and 5 carats, whose year-over-year price decline is 5% or more.  Halves and three quarters have lost more than 10% of their wholesale value compared to last year, underscoring the shift in consumer tastes to smaller goods. 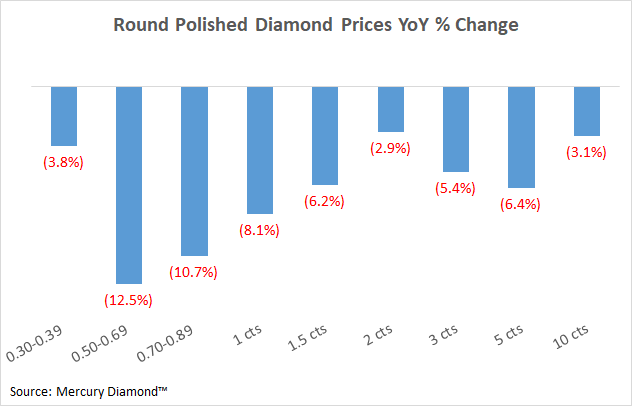 The continued long-term weakness in polished diamond prices is an ongoing issue. The improved performance of several size ranges is good news, and the overall flat price performance is an indication that prices may have reached their bottom, although this is not certain. During September, rough diamond buyers sought to buy goods from mid-size and smaller diamond mines, as well as the secondary market, because of their lower prices. This is a positive indication that the diamond industry is responding to the changes in the market. In addition, a cyclical rise in demand in the coming months is expected, and hopefully the influx of cash, coupled with a lowering of polished diamond inventory, could potentially lead to a recovery in polished diamond prices, at least in the short term.

Tweet
Diwali Lessons
Beneficiation in the Diamond Industry: Other Count...