Mercury Polished Diamond Prices: Signs That the Tide Has Turned The Mercury Diamond Global Tracker™ (MDGT™) averaged 114.94 in April, up 0.2% over March. Year-over-year, polished diamond prices are still low, down 1.9% compared to April 2017. The Mercury Index rose 0.28% in January and 0.08% in February, but declined 0.2% in March. Prior to that, the Mercury Index mainly declined for several years. Polished diamond prices peaked in April 2014, when the index reached 142.3. Since July 2014, the index has exhibited a steady decline with a few notable respites in the 44-month period.

The rise in prices is noteworthy, and not only because it is important for the midstream of the diamond pipeline to finally have some relief. Price increases in three out of four months is already a trend. The decline in March in this context even makes sense. Traders had certain sales expectations early in the month due to the trade fair in Hong Kong. When they did not materialize as expected, the reaction of price decreases was normal. However, the forces that are pushing up prices are steady and were present in March as well.

Polished diamond price increases are driven first and foremost by a rise in global consumer demand, primarily in the US and China, the two largest consumer markets. Another major force is rough diamond supply and cost. Until late last year, manufacturers’ inventories were high. Following the strong consumer demand in December last year, inventories declined to reasonable levels and in January manufacturers became hungry for rough diamonds. Diamond miners, mainly De Beers and ALROSA, supplied rough diamonds, but at a steady pace and largely without raising prices. The rough diamonds that were purchased in January started to make their way into inventories and the trading market as polished diamonds In March. So the rise in supply also played a role in surprising prices.

Consumer demand is pretty specific, which means that items in low demand are being manufactured as little as possible, and items in demand are often in short supply, which also drives prices up. Finally, the ongoing demand for rough diamonds was met by a decline in supply and a rise in prices in April, which in turn drove manufacturers to push for higher prices.

Last month we wrote that the direction that prices will take in April and May is important, because it will signal one of two understandings of the consumer market: if prices continue to decline in the coming months, this would indicate that prices are still too high, and the diamond industry, from polished wholesalers to rough diamond miners, will continue to contract until the new price base is found.

If, however, the price declines in March are temporary, and they start rising again in April and May, we will know that the extended price decline hit rock bottom, and the diamond industry will have a good understanding of what consumers are willing to pay. From this point, prices are expected to remain relatively flat or increase slightly in response to a combination of rising consumer demand against shortages in the midstream of the diamond pipeline.

In April, the index declined by 1.9% year-over-year. Since October 2017, the index has exhibited a continued deceleration in the year-over-year declines. The one exception was in March when prices temporarily changed direction.

Although the trend of year-over-year price declines started in December 2014 and has been long lasting, the deep declines of 2015 are behind us for now. The declines have since tapered down, mainly in 2016, and continuing into mid-2017. However, in September and October 2017, we saw the gap expand from 0.5-1% to about 2.7%, which has now narrowed to 1.9%. We expect this to continue to shrink in the next couple of months.

Despite the trends returning to “normal” – good consumer demand in December, shortages in the wholesale market and the edging down of year-over-year declines – the diamond industry is not yet in the clear. For that to happen, we need to see robust consumer demand throughout the year, and we are still waiting for that. 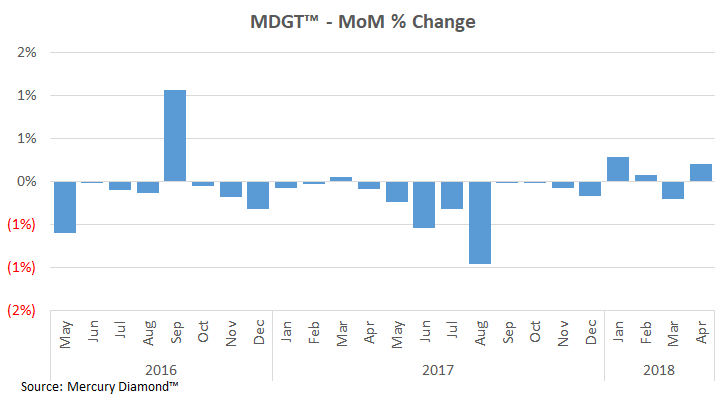 In 2017, prices were especially weak for a four-month stretch. Between May-August, with very few exceptions, prices fell across the board in every category. That was a period not only of vacations, but also of a slowdown in sales and demand that hurt the diamond industry to the point that it took more than a few companies to the brink. This trend has changed in recent months, and since the start of the year, we have seen a rise in three of four months.

Prices up Across the Board

The MDGT™ index is composed of the price performance of many different diamonds, of many different size ranges, from 1 carat and above. In April, prices of round diamonds weighing 0.30-0.39-carat (thirds) rose by 0.9%, posting their fifth consecutive month of price increases, reflecting ongoing preference for smaller goods, mainly in the US consumer market, even in mid-range and higher priced jewelry items. 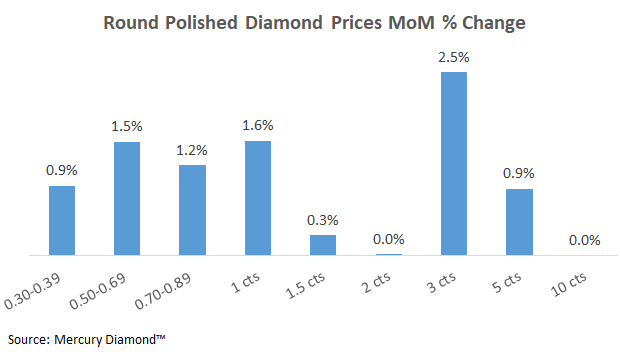 Despite the recent series of price increases, on a year-over-year basis, many key polished diamond categories are still priced lower than they were a year ago, although there are a few exceptions. One such exception are the third-carat rounds. The wide interest in them resulted in their prices being much higher than in April 2017 – up 8%. One-carat rounds, are up only 0.4% year-over-year, 0.5-carat goods are nearly 5% below their levels last year. They are however, closing the gap – in March half carats were down a dramatic 9.6% year-over-year. 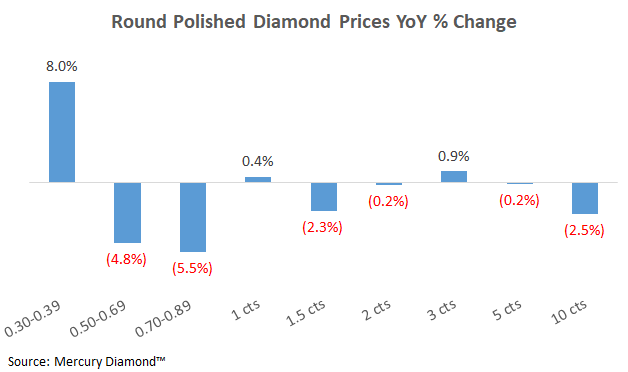 The long stretch of price declines seem to be over, at least for now. For several years, retailers in the US complained that polished diamond prices were too high and slowly shifted some of their offerings to other jewelry items, such as gold, semi-precious and other jewelry items. The ongoing pressure resulted in a decline in prices, returning to their late 2009 levels. At the time, prices started to climb and some will claim that they got out of control. It is reasonable to expect prices to remain around current levels for a while. It is less reasonable to expect prices to start dropping again in the near-term.

We have developed a system that collects transaction prices from a wide range of manufacturers, traders and retailers. These many monthly transactions are augmented by constant market research, which backs, double checks, verifies and completes the transaction data. The system covers more than 18,000 polished diamond categories across the 4Cs, including polished diamonds weighing up to 30 carats with clarities ranging from Flawless to I, in colors from D to P and in various shapes. 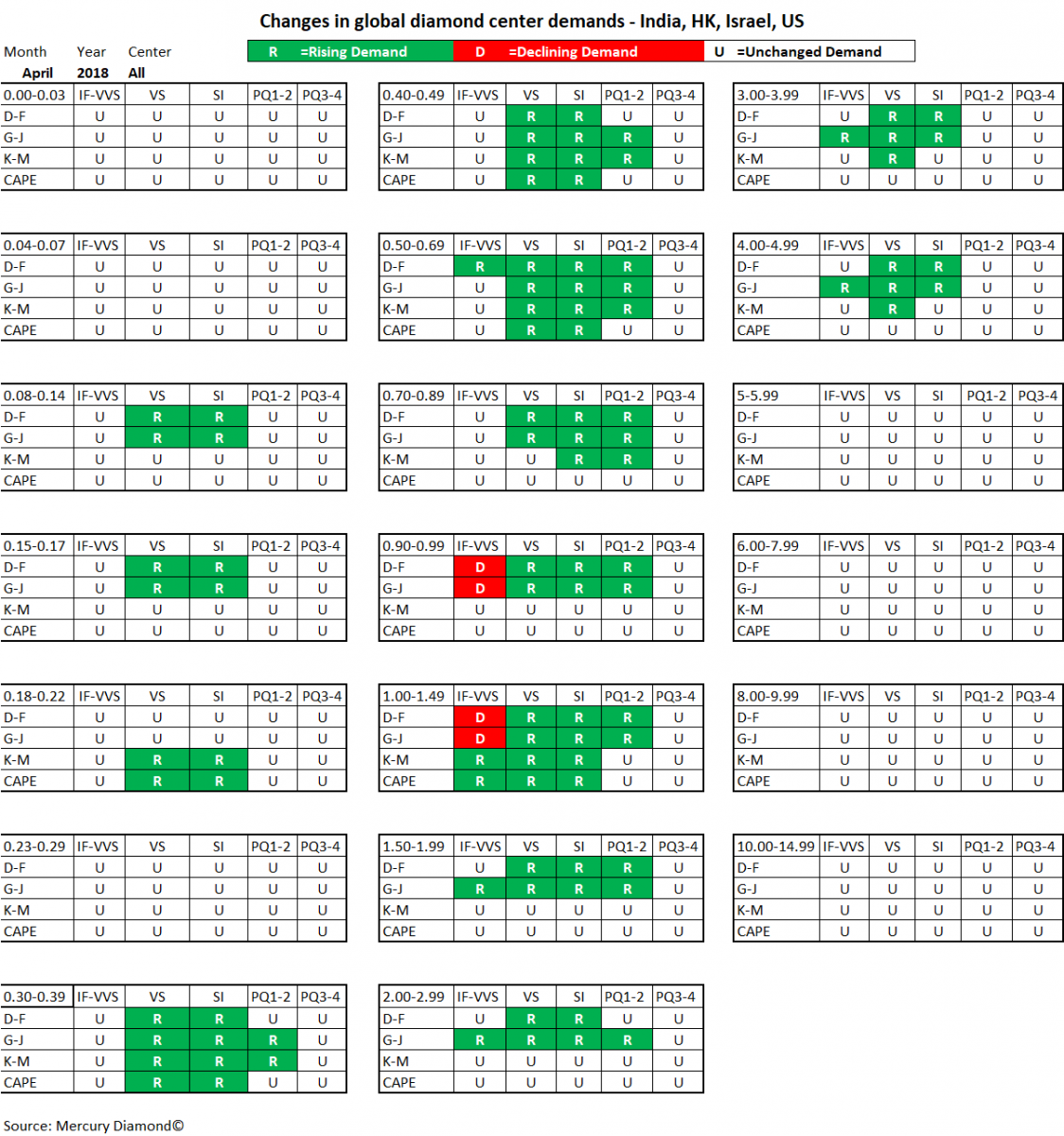