Mercury Polished Diamond Prices: The End of a Tough Year Polished diamond prices have largely declined during 2017, although the rate of decline has slowed compared to 2016. The year was marked by an extended period of dropping prices across the board and with a sudden small improvement at the very end, according to the Mercury Diamond Global Tracker™ (MDGT™) , an index of polished diamond transaction prices. The steady prices, following an extended period of price declines, are a welcome sign of stability for the global diamond industry.

The MDGT™ stood at 114.52 in December, a small 0.17% decline from 114.71 in November. The index has posted a series of very small monthly declines since April 2017, however the cumulative effect is meaningful, totaling 2.4% in the nine month period. Polished diamond prices peaked in April 2014, when the index reached 142.3. Since July 2014, the index has exhibited a steady decline, a 42-month stretch. On a year-over-year basis, the index declined 2.4%, and has been declining steadily on a year-over-year basis for more than three years. The last time the index showed an upward year-over-year trend was in November 2014.

Since its peak in April 2014, the MDGT™ index has fallen 19.5%. In effect, polished diamond prices have eroded, losing nearly a fifth of their value.

In December, the index declined by 2.4% year-over-year, a continued deceleration compared to the 2.7% declines in September and October and the 2.6% decline in November. The year-over-year declines, although milder than those experienced in 2016 and 2015, are still worrying as a cumulative trend of ongoing sliding prices.

Based on our market research, demand for polished diamonds by retailers has finally picked up to a level that allowed some price increases. Prices of polished diamonds did not rise in October and November and only did so in mid-December, which is a seasonal trend. Prices did not rise with demand, because consumers were unwilling to pay higher prices, and in response, retailers that were unable to charge more, were unwilling to pay higher wholesale prices. Consumers dictated prices. For the year, demand was not strong and reflected the issues the diamond industry needs to grapple with – stable consumer demand at best and high polished diamond inventories.

Inventories held by wholesalers and manufacturers in the midstream of the diamond pipeline were high throughout the year. It was not until late December, when the rise in demand resulted in a decrease in the inventories.

Historically, polished diamond prices show very little change in October, and they tend to rise in November, as demand from retailers rises with the holiday season. This cyclical behavior peaks in December, when prices of polished diamonds rise. The level of polished price increases in December is proportionate to the robustness of consumer demand for diamond jewelry. However, we did not see this trend in the fourth quarter of the year. Prices in October were flat with declines in key sizes such as half, one and two carats. In November, prices were nearly unchanged overall, with a few price increases for larger goods, weighing one to three carats. Only in December, when prices were supposed to peak for the year, did we see prices inch up. This is a cloud that is looming over the wellbeing of the diamond industry and is driven primarily by consumers. Consumers are not that willing to pay more or buy more. 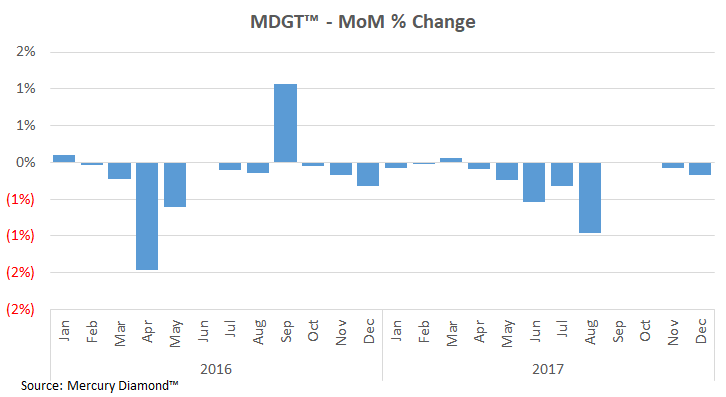 The MDGT™ index is composed of the price performance of many different diamonds, of many different size ranges, from 1 carat and above. In December, prices of many round-shape diamonds weighing one 1.5 carats or less increased by about 1.5% compared to prices in November. Round polished diamonds weighing one carat inched up 0.3% over November, half-carat rounds were up a robust 2.7%, and prices of thirds (0.30-0.39 carats) rose by 1.8%. Among rounds, the only size range that suffered from clear price declines were two-carat goods, which lost 1.8% of their price compared to November.

These changes in the price of rounds reversed much of the trend in November, when smaller goods were those that declined while larger goods, especially two carats, had improving prices. 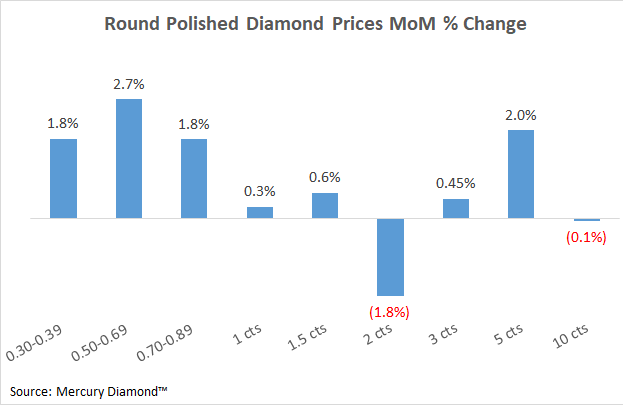 Since August of this year and again this past December, on a year-over-year basis, every size range declined in price. Some are just somewhat below their prices a year ago, such as 3 carats, which declined 0.8%. Others are far below their past price, such as half-carats, which lost over 14% of their value over the past year. This is a sad summation of the year for polished diamonds in prices, however it is a frank one. 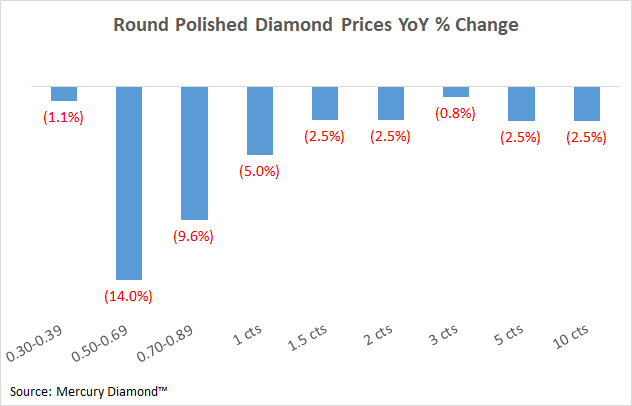 Despite the improved prices in December, the decrease in inventories and improved demand, 2017 was another year of price declines for polished diamond. The improvements seen in December were part of the cyclical trend of diamonds, and as such were relatively frail. Three years of price declines are three years of erosion, lost opportunities, and a sad statement on the health of the diamond industry. There are many partners to this outcome. Miners that woke up late to the need to create and finance generic marketing for diamonds; the midstream that suffers from overcapacity in manufacturing, financing issues, an abundance of traders that do not add value, and poor handling of companies the misbehavior of which hurt the many; and finally retailers, many of which treat diamonds as just another item on the shelf, instead of as the crown jewel that they can bring their customers. If they only offered education, care, and positioning, they would have reaped many rewards.

The entire diamond pipeline has a great deal of work on its hands, each with its own set of responsibilities. Only if each part pulls its weight will we see an improvement for all. The result will be increased demand and interest from consumers, better margins and a chance for long-term prosperity. If nothing else, that should be the lesson we take away from 2017.

We have developed a system that collects transaction prices from a wide range of manufacturers, traders and retailers. These many monthly transactions are augmented by constant market research, which backs, double checks, verifies and completes the transaction data. The system covers more than 18,000 polished diamond categories across the 4Cs, including polished diamonds weighing up to 30 carats with clarities ranging from Flawless to I3, in colors from D to P and in various shapes  [link to shapes article]. 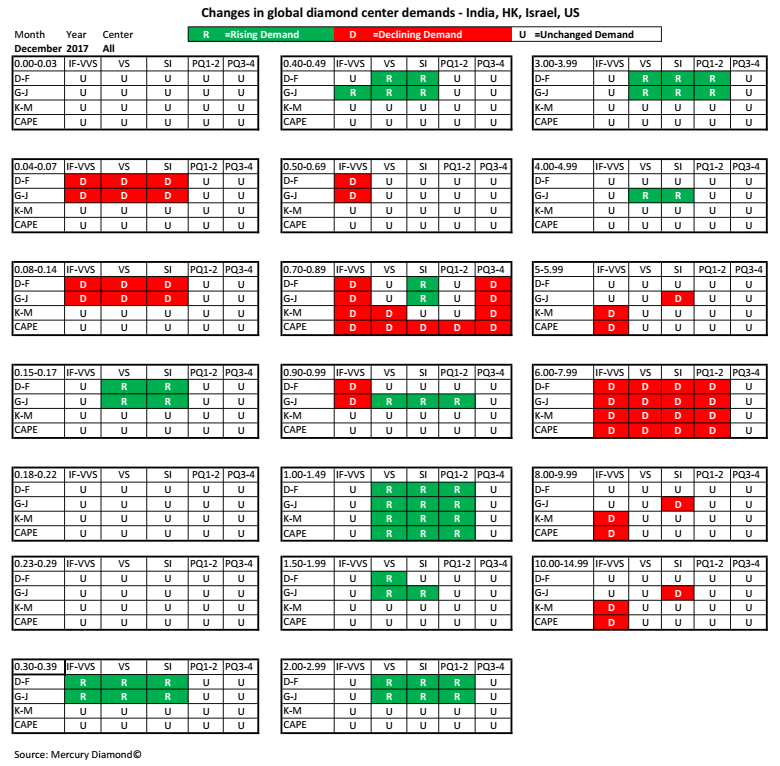 Tweet
Symbol of Love, or a Commodity Too?
December 2017 Market Report