Polished diamond prices dropped 1.7% in August, 2017 compared to the prior year, according to the Mercury Diamond Global Tracker™ (MDGT™), an index of polished diamond transaction prices. The sharp decline follows a period of milder price declines during the past few months, and rising concerns about the financial wellbeing of the diamond industry’s midstream. Polished diamond prices have been continuously declining for the past 33 months on a year-over-year basis. The last time the index showed an upward year-over-year trend was in November 2014.

The year-over-year rate of decline during August is a worrying trend. The rate of price declines since April moderated, and averaged just 0.5% on a monthly basis. The change in direction signals an end to that trend, and deep change in the diamond industry, which will likely mean an increased need to generate cash flow. In the past year, the rate of decline was often in excess of 2%, and at times as much as 3.7-4%. 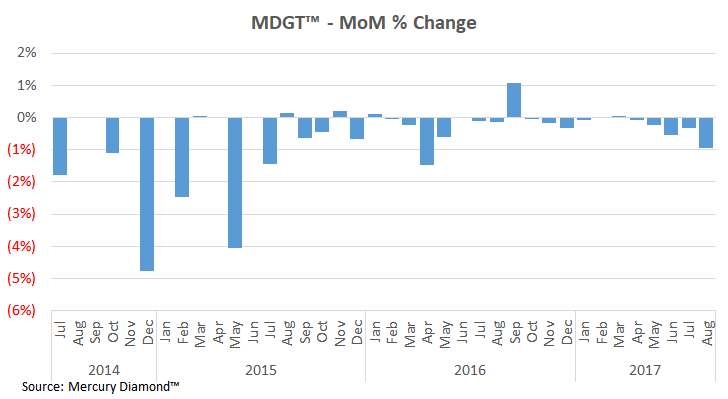 The MDGT™ index is composed of the price performances of many different diamonds, of many different size ranges. Overall, prices were down for all size ranges except one – thirds. Round diamonds weighing 0.30-0.39 carats increased in price during August, bucking the overall trend. Month-over-month, they had a 1.4% price increase, while all other size ranges decreased on average by 1%. The interest in these goods is seasonal. Jewelry manufacturers are already working on the items that will be offered at stores during the November-December holiday season, driving demand for this size of diamond. Why is the demand so pronounced with thirds? Among other reasons, this is due to a trend among US consumers to prefer smaller diamonds, and gentler, less flashy jewelry designs. This comes at the expense of half-carat and larger diamonds.

Prices of one-carat diamonds fell 0.1 percent during the month, a slower rate of decline than the 3.9% price drop they experienced during July. Two-carat rounds suffered the most extreme decline in price, sinking by 2.1% month-over-month. 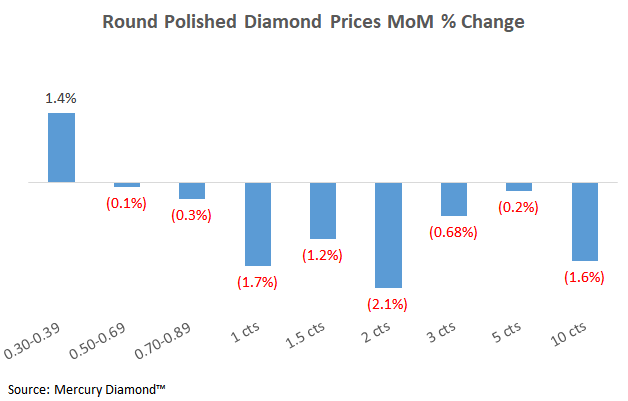 On a year-over-year basis, every size range declined in price, many in the mid-single digits. The most notable price declines continue to be halves, three quarters, 1, 1.50, 3, and 5 carats, whose year-over-year price decline is 5% or more.  Halves and three quarters have lost nearly 10% of their wholesale value compared to last year, underscoring the shift in consumer tastes to smaller goods. 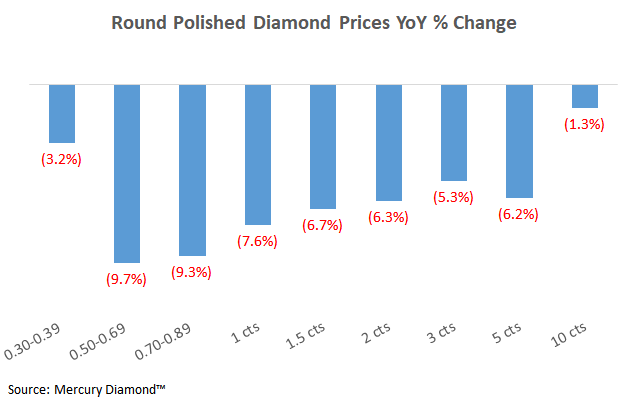 The continued long-term weakness in polished diamond prices is an ongoing issue, and the large drop in prices during August is concerning. In late August and early September, we saw a drop in demand for rough diamonds. Buyers of rough turned down high-priced goods, even from contract suppliers, and sought to buy the goods from other sources, such as tenders, at lower prices. This is a positive indication that the diamond industry is responding to the changes in the market. In addition, a cyclical rise in demand in the coming months is expected, and hopefully the influx of cash coupled with a lowering of polished diamonds inventory could potentially lead to a recovery in polished diamond prices, at least in the short term.