As long as there has been diamond jewelry to sell in the US, there have been traders and polishers at work there. The earliest documentation of a diamond center in NYC is from the 18th century, when it was located at Maiden Lane. A larger center developed in the 1920s, near Canal Street and the Bowery.

In 1931, a group of diamond traders decided to form an exchange modeled after the European diamond exchanges. They formed the Diamond Dealers Club (DDC), with offices on Nassau Street in lower Manhattan.

The NYC diamond center as we know it today was born of great international turmoil. The onset of WWII urged Jews, including members of Amsterdam’s and Antwerp’s diamond industries, to flee to the US, seeking refuge from the war raging in Europe and the persecution they faced there.

After Germany occupied Belgium and then the Netherlands, Jews involved in the diamond trade were taken and interned by the Nazis. Many thousands were murdered. Those who survived fled to Tel Aviv and New York, establishing new diamond centers in those cities. Less than 5,000 of Antwerp’s initial 35,000 Jewish inhabitants survived the war.

They had humble beginnings. Without money or goods, all they had to start their new lives was their knowledge and expertise of polishing diamonds and setting jewelry. However, it did not take long for them to develop a diamond community.

In 1941, as their numbers grew, the DDC moved to 47th Street between Fifth Avenue and Sixth Avenue in Manhattan, where they began to attract dealers located in other parts of the city. In the flourishing post-war economy, demand for diamond jewelry – especially engagement rings – sharply increased. Backed by De Beers’ “a diamond is forever” marketing campaign that started in 1948, the American consumer developed a taste for diamonds, and NYC’s diamond traders were there to supply whatever was needed.

This gave rise to the establishment of modern polishing facilities, direct rough diamond supplies from De Beers, and the formation of trade organizations such as the World Federation of Diamond Bourses (WFDB), which formalized an internal and international code of conduct for the diamond trade.

Today, the NYC diamond center has closed many of its smaller diamond workshops, driven out by the rising cost of manufacturing. This has not prevented the center from continuing to specialize in very high-end goods – large whites and fancy color diamonds of all kinds.

New York has been home to some of the most famous and influential diamond cutters in the world. Prominent among them are Lazar Kaplan, who is best known for carving out 13 polished diamonds out of the Jonker Diamond; Marcel Tolkowsky, who discovered a method to improve diamond light return and devised the “Ideal Cut” which paved the way for automatic machine polishing; and Brian Gavin, who created the “Hearts and Arrows” super ideal cut. They and many others continue to lead the way in cutting edge polishing from New York. 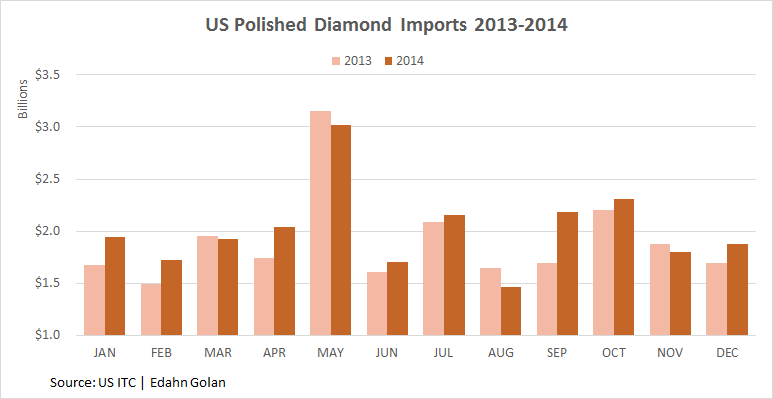 The diamond district itself serves as an important hub for sales, serving not only retailers across the country, but also a large number of tourists and visitors who come to the city seeking to buy diamond jewelry from one of the many traders and jewelry companies that populate the area.

There are an estimated 2,600 independent diamond and jewelry businesses located in the district. The DDC, now housed at 580 47th Street, has some 2,000 members, including several De Beers’ sightholders. Also located in the district is the Gemological Institute of America (GIA). In total, there are seven American sightholders, some based outside NYC.

Diamonds in Crisis: Call for an Overhaul
Not a Price Correction, But a Market Correction