On one hand, the diamond market is showing clear improvements in activity and demands. However, at the same time, prices of polished diamonds are at a three-year low, and demands are still mostly flat. There are some increases in demand, but in Israel there is a single notable drop in demand.

Some of the recent weakness is obviously a result of a string of Jewish, Chinese and Hindu holidays. At the same time, a series of bankruptcies – large and small – have also had their negative impact on the diamond industry.

The business closures and bankruptcies that are rocking the diamond industry around the world have arrived in the United States. In June, after a court ordered KBC to return diamonds it seized from Belgian diamond manufacturer, US entities of Exelco filed for Chapter 11 Bankruptcy Protection, listing liabilities of $50-$100 million. While this has less of a direct impact on the US diamond market than on other diamond centers, it shows that the rolling financial crises in the diamond market are far-reaching, and have great destructive powers.

The damage of business failures impacts polished diamond wholesalers’ payment terms, prices, and willingness to provide goods on memo to retailers. The problems trickle down. The potential impact is that smaller specialty retailers may find it difficult to get the kind of flexibility they need to operate profitably. On the other hand, some retailers understand that their vendors are pressed, and take advantage of it, demanding lower prices.

With the holiday season right around the corner, diamond traders in the US are reporting increased demand from retailers. Storeowners are expected to do well, generating decent revenue during the season, making up for the rather weak year they had with diamond jewelry so far.

The focus of retailer demand is on typical American goods – rounds, 0.18 to 1 carat, F-K colors, SI-I clarity goods. There is some additional good demand for smaller, SI clarity rounds.

Beyond rounds, there is an increase in demand for fancy shapes, specifically pears and ovals, 0.30 to 1 carats, focused on HIJ colors and SI clarities. There is somewhat better demand from retailers for larger pears and ovals, and these goods must have excellent makes.

Square shapes are not doing well so far; as one trader remarked, they are "dead in the water". Historically, princess-shape goods are the second bestselling shape after rounds. However, in the past few years, consumer interest in this shape has been declining. Despite the rise in demand, retailers are exhibiting very strong resistance to price increases.

The Indian diamond center was closed during a large part of the month during the annual Diwali and Hindu New Year vacations. The near standstill in activity during the period dictates much of the activity prior to the holiday. During the last ten days before the holidays, the Mumbai diamond market saw quite a bit of trading activity, with buyers attempting to finish as much business as possible to meet their needs. Sellers are happy to generate some extra cash just before the vacation. This is typical pre-Diwali activity.

Because diamond polishing factories are closed during the holiday, and there is a slowdown in manufacturing in the days leading up to the holiday as part of the preparations for the holiday shut-downs, fresh polished diamond supply in India drops significantly for about a month, and sometimes longer. Currently, the Indian diamond market does not expect newly manufactured polished diamonds to start coming into the market until December.

Demand from retailers rises just before the November-December holiday season, and manufacturing in India drops during the same time. In a regular year, polished prices therefore tend to rise too. This did not happen during October, and polished diamond prices are at their lowest in three years. Against this backdrop, traders are wondering if demand for polished diamonds will continue once the Indian diamond market opens after the holiday, or whether it was just a spurt thanks to the Indian holidays.

Good demand was reported for rounds 0.07 carats and below, in all clarities. One carat rounds, F-I, VS clarities and below were also in good demand, as were 1.50 and 2 carat I clarity goods. This is an expansion in the type of round goods in demand compared to demands in September.

The string of Jewish holidays, which started with the three-day New Year celebrations in late September and ended in mid-October, left very few working days during the period. Coupled with Diwali, trading volumes were low. In addition, shortages are widening into a greater range of polished diamond goods. However, this does not translate into polished diamond price increases, despite the shortages. At the same time, very large inventories are being created in non-desired items, for which, even after large price declines, there is no demand.

Demands in the Israeli diamond market are noted for round, 0.30 carat G-J colors, SI clarity and for cleanish 1/6 carat rounds. There are demands for 0.06-carat rounds in practically all clarities, and for 1-carats in K and lower colors at $2000 per carat. In larger goods, the demands from buyers are for goods with low prices and deep discounts. Buyers that traveled to the Israel Diamond Exchange in late October offered 7-8% less than they did in the recent past for 1 and 1.5-carat goods.

The one area where there is a clear drop in demand is 1/10-carat rounds. Demand for fancy shapes and square cuts in the Israeli market were flat.

After a small improvement in activity in September, the best that traders had to say about the Hong Kong market in October was that it was stable. On October 1, National Day was celebrated in China, marking the start of a long holiday that is characterized by a lot of travel and a boost to businesses that benefit from Chinese tourist visits – such as jewelry retailers. The tourist traffic improved the diamond market in Hong Kong. But although shops were busier, local diamond traders feel that the rise will not last for long, perhaps until November.

The mood among Chinese diamond buyers is not very positive. They say that they don't feel there is any improvement in their market, although some reports indicate that diamond jewelry sales are on the rise. One such report comes from the world’s second largest specialty jewelry retailer, Chow Tai Fook. In their most recent quarter ended September 30, same-store sales in Mainland China improved 9%, and total sales are up 15%. At the same time, the retailer reported that its revenue from gem-set jewelry in China softened 1% during the period.

Chow Tai Fook’s results in Hong Kong were much better. In a market that suffered from a long period of shrinking business, the retailer’s same-store sales increased 13%, and same store sales of gem-set jewelry rose 7%, year-over-year.

There was steady demand in the Hong Kong polished diamond wholesale market for round, half carat, F-H color, SI1-I2 quality goods. Round, 1-carat, D-H color, VS-SI goods are also in demand, as are emerald-shaped diamonds, weighing 0.50-0.90 carats, D-G colors, VS clarity. As in other markets, there is demand for very few ranges, and prices are soft. During October, prices of round 0.01 to 0.18 carats dropped by about 3%. 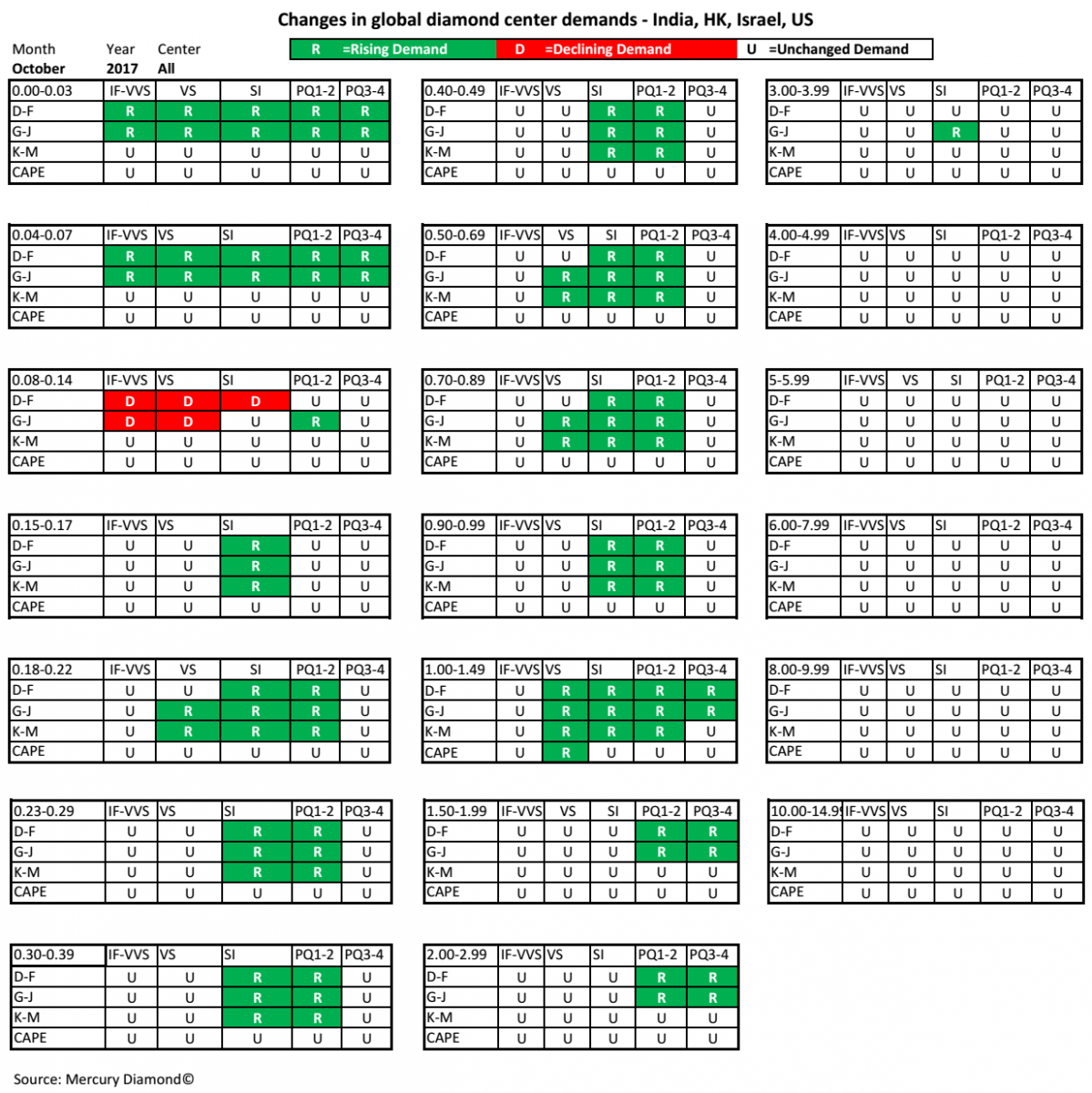 Equity Investment: Do we Have What it Takes?
Diwali Lessons