On Land, Underground and at Sea: The Many Types of Diamond Mining

In our examination of the mining side of the diamond industry, we have looked at mining demographics, both in terms of the companies in operation, as well as the countries where diamonds are being mined. Now, I would like to take a look at the diamond mines themselves.

Diamond mines can take several different forms, depending on the location and the geology of where the mine is located. The type of mining employed can have a significant impact on the economic viability of the mine, and can ultimately determine if a diamond deposit can be developed or not. Mining, however, must take into account more than just economic considerations.

A series of laws and regulations govern mining, all designed to benefit the local economy, protect lives, and conserve the environment. Among these laws, which differ from country to country, are requirements for employment of local residents, royalty payments to the host country, and at times to the local state and even to the local community.

There are also a series of environmental laws that ensure water resources are protected and developed, laws that require restoring mining areas to their pre-mining state, laws designed to protect wildlife, and laws designed to improve and protect quality of life for local residents. For example, mines are often required to develop infrastructures such as roads, build housing, or supply water treatment facilities to the local population.

In this this instalment in our series on mining, I want to look at the various ways in which diamonds are extracted from the earth. 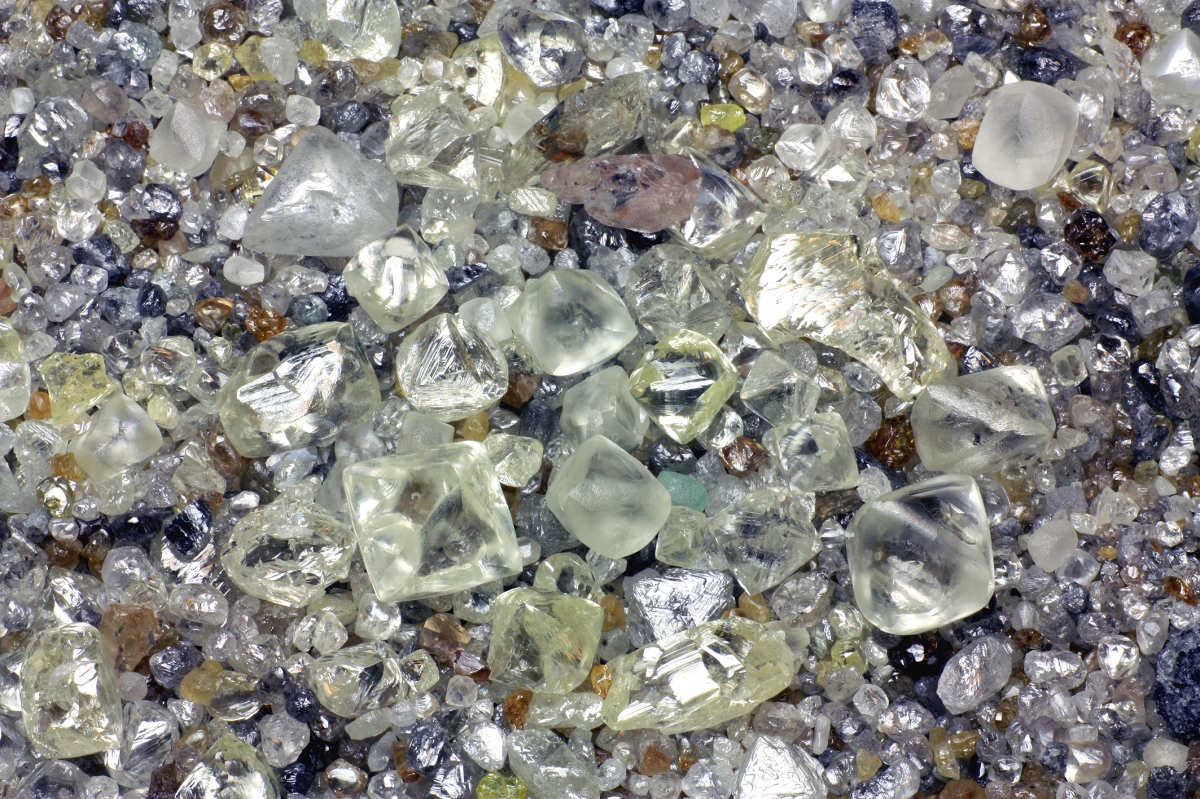 The most common form of diamond mining takes place in what is known as an open pit, which is generally the most cost-effective alternative for large kimberlite deposits. In open-pit mining, a large carrot-shaped hole is dug in the ground, starting from its widest point at the surface and getting gradually narrower at depth. This type of digging exposes the entire extent of the diamond-bearing kimberlite so that no ore is missed during processing. The digging is done in such a way that the outside walls of the pit form roadways that allow hauling machinery to travel down to depth safely.

In a typical open pit mine, the rock is dug up using excavators and loaded onto large dump trucks, to be hauled to the appropriate location for processing or storage. In some cases, surface rock can be dug easily without any explosives required. However, in most cases, the rock must first be broken up before it can be lifted onto dump trucks and transported. This is done using explosives, which are dug into the rock and detonated. The smaller pieces of broken rock can then be moved.

A critical part of the feasibility of open pit mining is the strip ratio, which is the ratio of waste material that must be mined relative to the diamond-bearing ore within. The amount of surrounding host rock and/or the amount of material on top of the kimberlite which must be extracted first, known as over-burden, can sometimes determine if a mine is feasible or not. There are examples in the world of large diamond-bearing mines that have not yet profitably been mined because of the significant amount of over-burden that would first need to be extracted. In most cases, some degree of waste rock is essential to building a mine, as this excess rock can be used to build roadways and access ramps for machinery.

The world’s largest open-pit diamond mine is the now-inactive Mirny pit in Russia. The Mirny mine is the second largest excavated hole in the world after the Bingham Canyon Copper Mine in Utah, U.S. The hole is 525 meters deep and 1,200 meters wide at surface. Helicopters have been banned from travelling over the pit because of incidents where they were sucked in by the downward air draft!

Most underground mining takes place after an open pit mine reaches the point where it is no longer economically viable to extend the pit walls outward to support digging to lower depths, such as the Mirny mine. However there are some examples of diamond mines that are exclusively underground mines from inception.

There are several different types of underground mining but the most common variant is called block caving. This type of mining for diamonds was first introduced at the Kimberley mine in 1951. It relies on the kimberlite rock being weaker than the surrounding host rock material. A large tunnel is dug at a shallow angle until the tunnel reaches the ore body. A large chasm or void is extracted using blasting and digging. This void underneath the target kimberlite allows the rock above it to collapse into the void, where it can be safely hauled away through the tunnels and back to the surface.

But underground mines also have unforeseen risks. The De Beers Snap Lake mine in Northern Canada is a good example. Snap Lake was Canada’s first purely underground diamond mine. Once mining commenced, challenges with large amounts of ground water seepage created significant cost pressures and environmental concerns that ultimately made the mine unprofitable to operate. As a result, the mine has been placed on care and maintenance after just seven years of mining. The Ghaghoo mine in Botswana is an example of a mine that was developed strictly as an underground operation, owing to the large volume of over-burden on top of the ore body that would be uneconomical to mine in an open pit.

Alluvial mines occur where natural erosion, mostly from river systems and tidal washbasins, has eroded the surface of diamond-bearing kimberlite rock and has transported the sediment to other locations. These diamonds tend to be easier to access, and are usually found in surface gravel or existing river systems. This makes them much easier to extract and process without the need for explosives or large crushing operations.

Alluvial deposits can be challenging, owing to the expansive geography over which the diamonds have been transported over millions of years. As a result, they don’t often lend themselves well to large-scale mining operations and are frequently mined by the informal artisanal sector in small rural communities, principally in Africa. Historically, this sector of the diamond industry has been under a great deal of international scrutiny due to the lack of legislation and protection for workers or the environment in these remote mining locations.

The Marange diamond fields in Zimbabwe are a good example of some of the challenges faced in mining alluvial deposits. The Marange fields are thought to contain massive deposits of diamonds, which are located both at surface and at depth. However, nature has spread the diamonds over a huge region, estimated to be in excess of 750 sq. km, which makes it economically unbeneficial to recover any of the diamonds below the ground level. The diamonds near the surface, in contrast, can be recovered using simple techniques and inexpensive machinery.

Unfortunately, diamonds rarely present themselves on the outskirts of developed cities and are frequently located in inhospitable regions of the world. This is no more evident as when diamonds were first found in the Atlantic Ocean, primarily off the coastline of Namibia. These diamonds were transported over 90 million years through a process of erosion, as drainage basins in Southern Africa flowed from east to west and emptied into the Atlantic Ocean. Strong currents travelling north along the West African coast transported the diamonds, and they concentrated in certain areas both on and off the coastline of Namibia and South Africa.

German oil and gas companies were the pioneers of this technique. Today, marine mining is done using ships that essentially vacuum the seabed through long hoses at depths up to 500 feet, at a rate of up to 460,000 cubic feet per hour. The mixture of water and gravel is sifted and packed and then transported via helicopter to land-based recovery faculties to extract the diamonds within.

Marine operations are noted for the high quality of the diamonds recovered. Due to the intense natural processes that occur over millions of years as these stones are transported, many of the diamonds are of the highest quality, while the stones with many inclusions tend to break apart. As a result, marine mining operations have some of the highest average values in the world.

Beyond the extraction of diamonds from any particular region, companies must also look at the recovery of diamonds from the ore that they mine. This area has seen significant improvements in recent years due to advances in technology for diamond recovery. Next week I will examine some of these recovery techniques and how they are advancing the diamond industry.

Post Basel show
Is the Diamond Industry Finally Going Back to Basi...