Polished Diamond Price Index: Sharp Price Changes – Up and Down Prices of smaller goods, one carat and below, completed six months of price increases in January. Larger goods, however, which suffered from price declines late in 2018, continued to decline in January, according to the Mercury Diamond Global Tracker™ (MDGT™). The price changes were just shy of a single point for those that increased in price, while the declines were more dramatic.

The continued price increases among rounds weighing up to 1 carat is a positive trend in the market, indicating a rise in demand among retailers. Furthermore, it provides relief for the long-embattled wholesale sector of the diamond pipeline.

The decline in the index reflects the downward trend of polished diamonds weighing at least 3 carats, an ongoing trend.

Year-over-year, the polished diamond index declined a steep 5.7% in January. In the past 10 years, the MDGT™ index declined only twice, in January 2017, and last month. Usually, the index is flat or inches up in January. This takes place against price increases in December and the replenishment by retailers right after the holiday season.

Over the past decade, the price increases averaged 0.3%. The MDGT™ has shown a negative year-over-year trend since December 2014.

Although the trend of year-over-year price declines started in December 2014, the steep declines of 2015 appear to be over, and they have since tapered off, until the last quarter of 2018. In most of 2018, the year-over-year decline averaged 2%. However, since September, when the index declined 2.7%, the decline has been widening. The 2.8% decline in October, followed by the 4.0% decline in November, a 4.4% decline in December and the 5.7% decline in January are not positive signs. And while compared to the steep declines of 2012 and 2015, the recent results seem moderate in comparison, the deepening decline may be signaling a deep-seated issue.

On a month-over-month basis, the MDGT™ index declined for the fifth consecutive month. On average, the index declined by nearly 1% in each of these five months, compared to an average decline of half a percent in the past year. 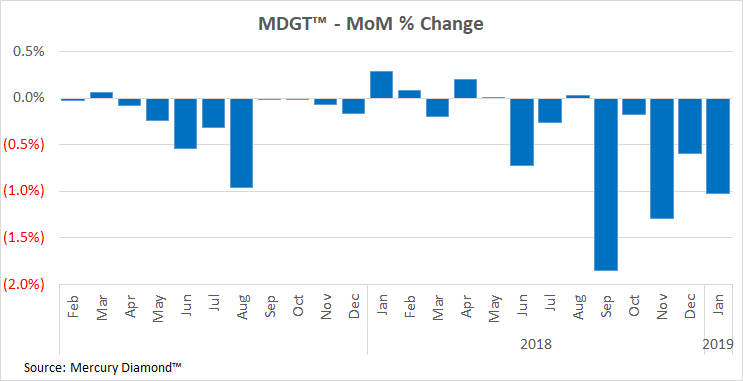 By Size: A Mixed Trend

When examining specific size ranges, a more complex picture emerges. On a month-over-month basis, prices of most round goods weighing 2 carat at most had price increases. The smaller goods, which experienced a resurrection lately, have declined, possibly reflecting that prices ran ahead to far. Rounds weighing 0.30-0.39 and half carats declined by 0.9% and 0.4%, respectively.

Prices of one-carat rounds improved 0.7%, as did 1.5-carat rounds. Two-carat rounds, an item that did not do very well this past year, posted a price increase for a second month in a row. Larger goods, 3 carats and up, continued their ongoing decline. 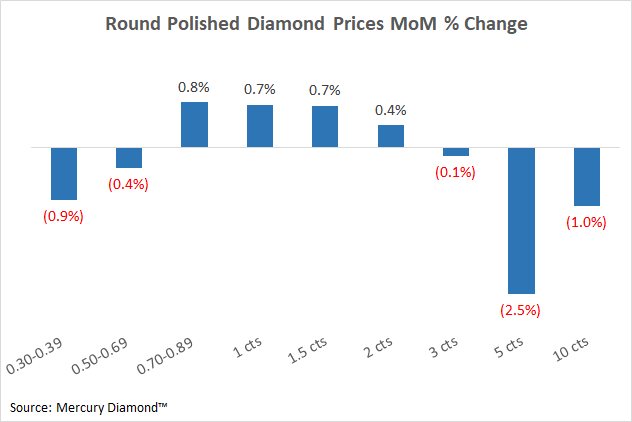 On a year-over-year basis, price behavior was somewhat different: prices of goods weighing one carat and below all increased by a low to mid-single digit in January. Conversely, larger round goods posted a price decline, also at a mid-single digit.

Larger goods, with little exception, were down during the month. Rounds weighing 1.5 carats inched down 0.2%, 3 carats declined by 2.5%, while bigger items lost more than 5%. 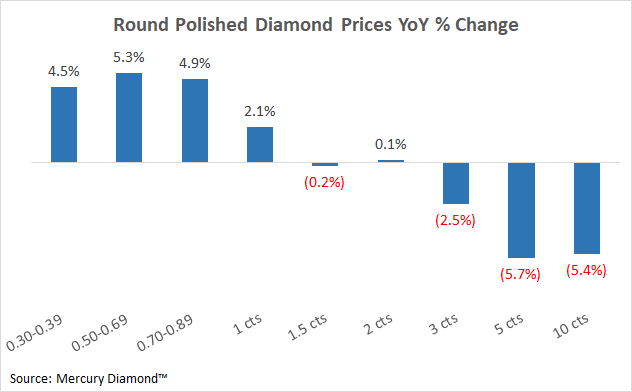 Wholesale prices of polished diamonds that are set in jewelry in factories have largely increased, while the larger goods, those that many retailers keep on hand as loose to set based on specific orders, have declined. If this is an accurate characteristic, it tells us something about the trends in the consumer market – less customization, typical of high-priced orders, and more fashion-oriented purchases.

With 2018 behind us, it is now time for the industry to gather its wits and try to generate a turnaround for the industry before LGD devours it whole. Fashion jewelry is the main target of lab-grown goods, and the rate of acceptance is growing at an alarming rate. Alarming if your business is natural diamonds. Many companies are considering their options, including retailers and traders. Adding lab-grown to their offerings no longer seems like such a bad idea to them.

If the diamond industry as a whole is okay with that, then that is fine. If it is not, the time to go out and salvage natural diamonds is now. 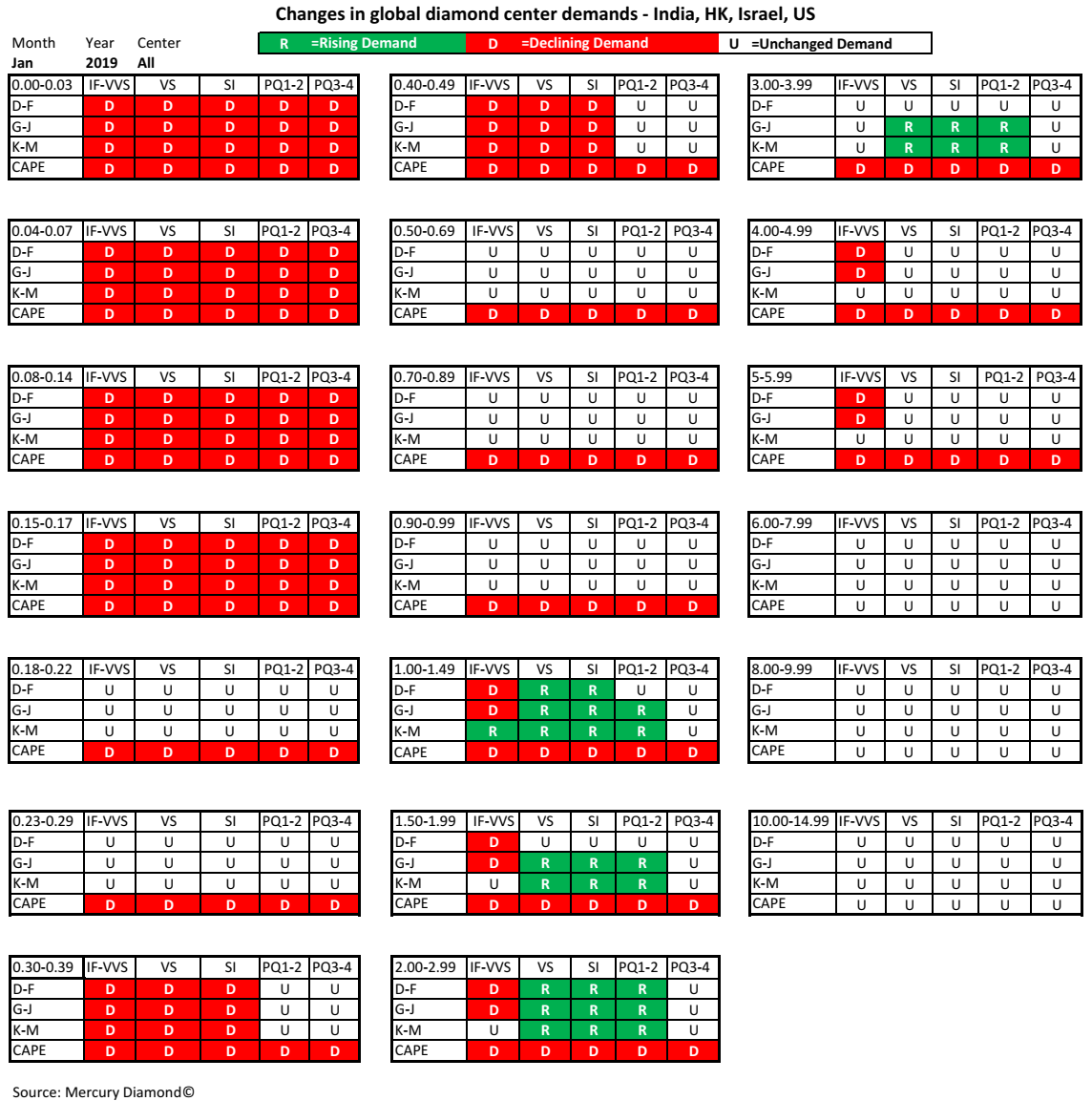