Rough Supply Up, Polished Sales Down, and Stockpiles Created It was only a week ago when we discussed the disconnect between rough and polished diamonds, and it seems that the divide is only growing. Last week, I noted that De Beers’ rough diamond sales increased during the first half of 2017. My point was that rough diamond supply increased, while polished prices and demand declined.

De Beers reported that their diamond production in the second quarter of the year totaled 8.7 million carats, a 36% year-over-year increase. My research firm Mercury Diamond reported two weeks prior that the Mercury Diamond Global Tracker™ (MDGT™), an index of polished diamond prices, declined 0.6% year-over-year in June 2017. It was the 31st consecutive month of decline, a period of more than two and a half years of continuous eroding value. The disconnect, however, is less related to changing prices, and more to demand: if there is demand, the supply makes sense.

Demand in the diamond industry has two tiers: rough diamond demand from manufacturers that polish diamonds, and demand for polished diamonds from consumers, retailers and jewelry makers. Manufacturers largely pull their demand from producers, who are the source of rough diamonds. Demand for polished is pulled from manufacturers, who are the source for polished diamonds. Manufacturers are those who stand in the middle, between rough supply and polished demand. It is therefore imperative that at this one point of connection a balancing between supply and demand takes place. Unfortunately, this is not working as well as it should – to the detriment of the entire diamond pipeline.

Please take a look at the following changes in polished diamond inventory in the wholesale level of the diamond pipeline in July compared to June, according to Mercury Diamond’s research: 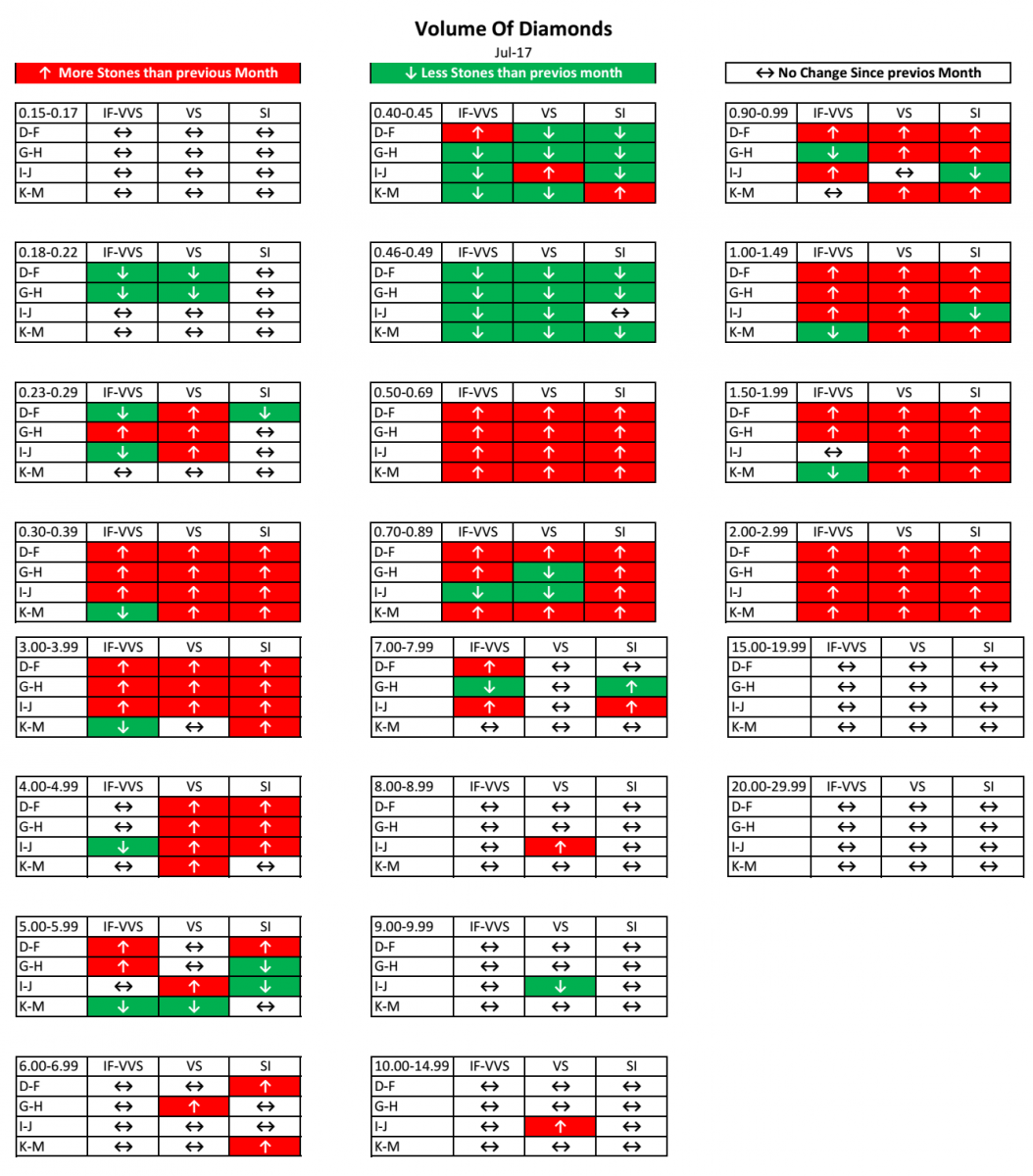 These are all rounds, GIA certified, triple excellent, non-florescent polished diamonds. Let’s focus on sizes from 0.18 to 2 carats, because that is where the bulk of the business takes place, and it is easier to identify them accurately because they are most often certified, especially from thirds and above. The red areas highlight where there is an increase in inventory levels. Starting from half carats and continuing through two carats, inventory rises with few exceptions.

This situation has many implications. Think of cash flow, for example: in a market where rough diamonds are purchased at a growing rate, the outlay increases as well. In a market where sales are declining, income decreases. A business that suffers from a rise in spending and a decrease in income is facing an immediate problem. This needs to be mitigated. An industry that suffers from these issues is facing an even greater problem, because the problem impacts everyone, including businesses that balance their spending and income.

Another issue is one of cost: as demand for rough diamond rises, so does price. Manufacturers are buying the same goods, at greater quantities, for more. This sends the industry into a loop, because the price of polished is declining, resulting in even narrower margins. Once again, a business that operates in such a way is hurting itself. An industry that operates this way may hurt related businesses.

So we have a dwindling cash flow stream against growing expenditures, and we have rising costs against decreasing prices. To that we should add a rise in risk liabilities, because the value of the inventory needs to be accounted for. Bank financing in the diamond industry is mainly provided against sales. Holding on to inventory is not necessarily an advantage in the same way as for most other assets. As in most other manufacturing sectors, banks want to see manufacturers buy raw material, manufacture their product, and sell it. Not buy, manufacture, and keep.

The most recent peak in rough purchases was influenced by external forces. De Beers identified much of the rise in demand from Mumbai-headquartered Sightholders that wanted to step up the pace of manufacturing before Diwali, which takes place in mid-October. The idea is to give employees an opportunity to work more and earn more before going on vacation for a couple of weeks. This takes place every year, and is a great industry tradition that puts the labor force before many other considerations.

Considering that the issues outlined above are industry wide and not a business-by-business problem, the question that should be asked is to what kind of market are we heading? Can the diamond industry absorb a growing quantity of rough diamonds? Can it afford to pay more for this raw material? In a market of decreasing sales, who does secure financing? What kinds of steps will it take to rejuvenate demand for polished diamonds in the consumer market, and how does the industry intend to push up prices to protect margins? These are all hefty issues, and all need to be addressed - sooner rather than later.