September was dominated by two events – the upcoming holiday season, and the Hong Kong Jewellery & Gem Fair. The upcoming season is starting to have a positive impact on the diamond industry, and the levels of demand are rising in the US. The Hong Kong trade fair went better than expected, yet traders were left with the following question: are we actually turning a profit, considering the cost of rough diamonds, and the achievable polished prices?

Demand for polished diamonds in the US market improved significantly during September, signaling retailers to start setting their sights on the November-December season.

After a very slow year, US specialty jewelry retailers have dried up much of their inventories, at least to the point where they are comfortable enough to place orders and round up goods for their inventory. The focus is mainly on round goods, 0.25 to 1.50 carats, and in particular on 0.50 and 1.00 carat goods in typical American clarities – SI-I2. The range of demand in terms of color was wide, from D to M. Although there is no unusually strong focus on pairs, many of the independents are expecting good consumer demand for stud earrings, a popular diamond jewelry item in this market.

On the other hand, the expectation among quite a few of the retailers is that stud earrings will be bestsellers this year, and that will overshadow just about every other diamond jewelry category. Historically, while diamond earring studs always sold well, other mainstays such as diamond pendants and solitaire rings have also performed strongly. Demand for other diamond shapes was unchanged from their long-standing low levels. This continued level of demand better reflects retailers’ caution than consumers buying habits in practice.

Traders in India hit their annual September snag – a busy period early in the month around the Hong Kong trade fair, followed by a slowdown as traders start thinking about Diwali, which will take place during the second half of October.

Traders reported that polished diamond sales were quite steady during the Hong Kong trade show, which took place from September 13 to 17. However, to generate sales, traders found that they needed to reduce prices. This raises an important question: have these traders been able to cover their costs that is the cost of rough diamonds, plus the cost of polishing, plus the cost of exhibiting at the trade fair? At this point, this question remains unanswered.

Adding to the hardship of the Indian diamond center are the inventory levels. Traders are reporting that inventories are quite high, which is not a surprise considering the ratio of rough diamond purchases to polished diamond sales. The high inventory level is not a problem if it was generated to serve an expected rise in demand, such as the upcoming holiday season. It is a problem if it was not created with the specific expected consumer demand in mind. These inventories have the potential to accumulate, and to burden manufacturers’ bottom line.

Overall, demand for polished diamonds in the Indian diamond market was relatively flat in September. A certain uptick in demand was noted for better color/clarity rounds, 0.30-0.49 carats, and for 0.70-0.89 carat goods. Demand for fancy shapes, 0.40-0.49 carats, D-J colors/SI clarities declined, while demand for 4-carat, D-J colors/IF-VVS clarities improved. Demand for Princess and other square-shape diamonds was mainly flat.

Israeli diamond traders released a sigh of relief as they came back from the Hong Kong trade show. Prior to the event, Israeli traders were wary that the recent bankruptcies in India would negatively impact the show. However, after a long period of unexciting sales, the Hong Kong show brought about decent trading activity.

Sales were made for a variety of goods, and traders were happy to see the decrease in their inventory levels, which had recently accumulated. However, the question remains: have sales resulted in a profit? This is a question that traders admitted that they have been asking themselves. Traders are pointing out the difference in their costs when buying rough diamonds at tenders, which seem to reflect prices “on the ground,” and the rough diamond prices charged by the main producers, which traders consider too high.

A few Israeli companies that have purchasing contracts with the main diamond producers seem to be buying the rough diamonds from their suppliers, but instead of polishing them, they prefer to offer them for sale on the secondary market. The concern among Israeli traders is that while these companies report business as usual, the situation is not so, and they have absorbed losses.

Demand for polished diamonds in the Israeli diamond market remained similar to those seen during August. There was good demand for 1 and 0.5-carat rounds, and a rise in demand for yellow diamonds, specifically fancy light yellows, fancy yellows, and intense yellows.

The Hong Kong Jewellery Show opened with low expectations by the diamond exhibitors. Many felt the burden of hard and difficult sales over the past year, and did not expect the latest show to be much different. Relative to their expectations, traders reported a good show with strong demand for round-shaped goods across the board, including large goods weighing 5-10 carats and above. That said, when trying to assess the level of sales compared to the same show last year, traders estimate that sales improved only slightly.

Nonetheless, diamond exhibitors were happy with the results, as they are selling, and selling more. Buyers, many from Mainland China, were making low offers, but many traders, mostly Israeli and Belgian, remained firm on their price demands. Indian diamond traders did find that they had to be more flexible to get to the level of sales they needed.

The market in China was also reported as stable. Chinese buyers claim that they are not seeing any improvement in their local markets. However, there are reports that diamond sales in China increased by some 1-2%. 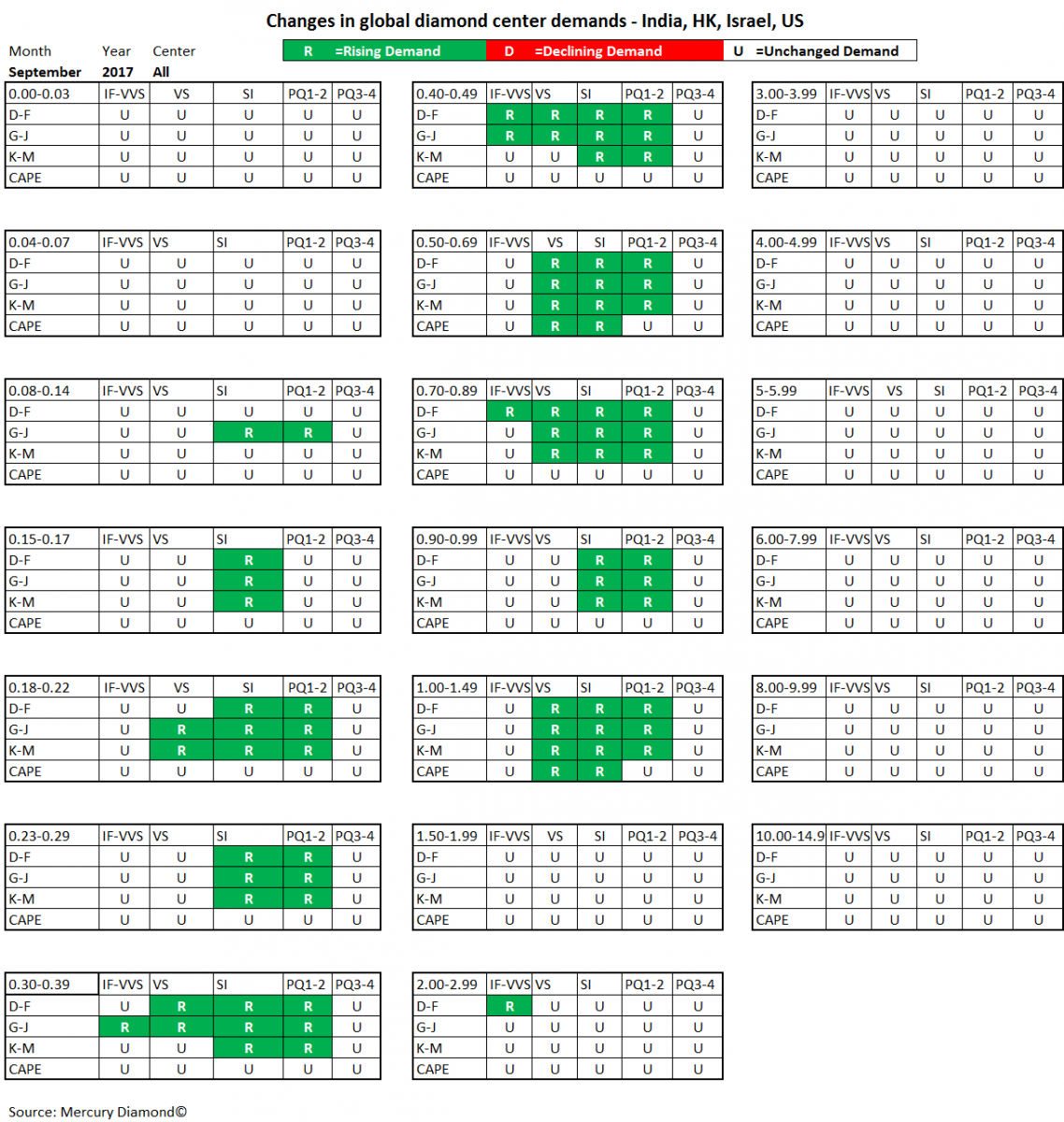