Mixed reports from the global diamond centers in September underlined the market inefficiencies. While the demand for rounds in India was steady, the U.S. demand for smaller lower color goods declined and some top color rounds increased. However the October requests slowed down even further and traders hardly felt their holiday season.

Declining Interest in the US market

In the US, the main diamond jewelry consumer market, retailers are buying fewer diamonds. 1-4 carat D-J color rounds, especially in better clarities, were requested by independent American retailers in September. In October, this trend expanded to smaller sizes, as specialty jewelers cautiously built an inventory to test consumer demand and prepare for the November-December holiday season.

This is a departure from the traditional HIJ/SI-I goods that consumers usually buy and probably an attempt to see whether offering different goods would reinvigorate consumer demand. At the same time, retailers seem to have lost interest in lower color rounds up to 0.89 carats and they bought less of them. Interest in larger goods was steady throughout.

The demand for square diamonds, including Princess and Emerald shapes, also declined and most fancy shapes were steady. There is an interest in fancy shapes of 1 carat and more, but only with the best makes.

In mid-September, traders in India, the world’s largest diamond supplier, said they saw a small improvement in the market before the Hong Kong trade fair. Sadly, this did not last long and the slight positive trend was followed by a dip in activity that extended through October.

Polished demands have hardly changed since August, making the mood not very positive. A few sporadic changes in September included improved demand for some VS and VVS round pointers and a number of scattered declines, mainly among 4-15 carat round goods. These declines have expanded from G-J/VVS-VS in September to the entire color range in VVS-SI clarities during October.

Business in fancy and square shapes was steady yet subdued over the past two months.

The good business at the Hong Kong show briefly picked up matters, but did not last. The weak demand from the US market was further impacted by the Jewish New Year and following holiday season which slowed down trading activity internationally and especially demands from Israel.

Locally, the Indian manufacturing sector increased its work activity before Diwali in a drive to provide more income to workers and churn out the last rough waiting to be published. Currently, in the last week of October, factories in India are preparing for the Diwali shut down. This should impact the availability of goods in the market in the next few weeks.

The September jewelry and diamond shows were better than expected, although many exhibitors stated they had no expectations. Traffic was higher in the diamond side of the show and many visitors who used to come directly to the jewelry show (which starts a few days after the diamond show), arrived earlier this time and started their attendance at the Airport venue.

There was a lot of activity, mostly for dossiers and 1 carat rounds. Even large goods, 3 carats and up, saw improved activity and rising prices. As much business as the show generated, it mostly remained in the show and did not spur much wider activity.

The Hong Kong market remained slow during the rest of September, which did not change in October. The limited demand was for 0.30 to 1.5ct round D-G / VS-I stones and 0.30 to 0.70 cts D-G / SI Marquee and Pear shapes. In October, those sporadic requests have shrunk, leaving the market at a very low operating level

Local retailers continue to report a much reduced level of consumer activity. The flow of Mainland Chinese has not improved and many feel that they must adjust to a model that relies less on that clientele and expect that the current situation will be a long lasting one.

In Mainland China, the market remains stable with noted requests for rounds 0.30-1 cts GHI / VS.

The Israeli market is suffering from a long lasting slowdown, impacting mostly smaller and mid-size firms. Demands were largely unchanged in September compared to August. Inquiries are low level and prices are stable. Some very specific and sporadic orders for rounds were not enough to push prices up and the market is continuing to report a shortage in goods due to a decline in manufacturing.

Demands for ¼-3/4 commercial rounds were reported during the last two months with no effect on prices. There is a continued demand and shortage in the 0.01-0.08 collection due to limited manufacturing. Demand for dossiers was steady.

There were demands for good make Pears in D-I colors and for H-L Emeralds with continued resistance to price hikes. The demand for princess shape continues to be weak in Israel, alongside a low demand for fancy yellow.

The October Jewish holidays brought the market to a near standstill as most holidays occurred in the middle of the week, leaving few business days throughout the month. 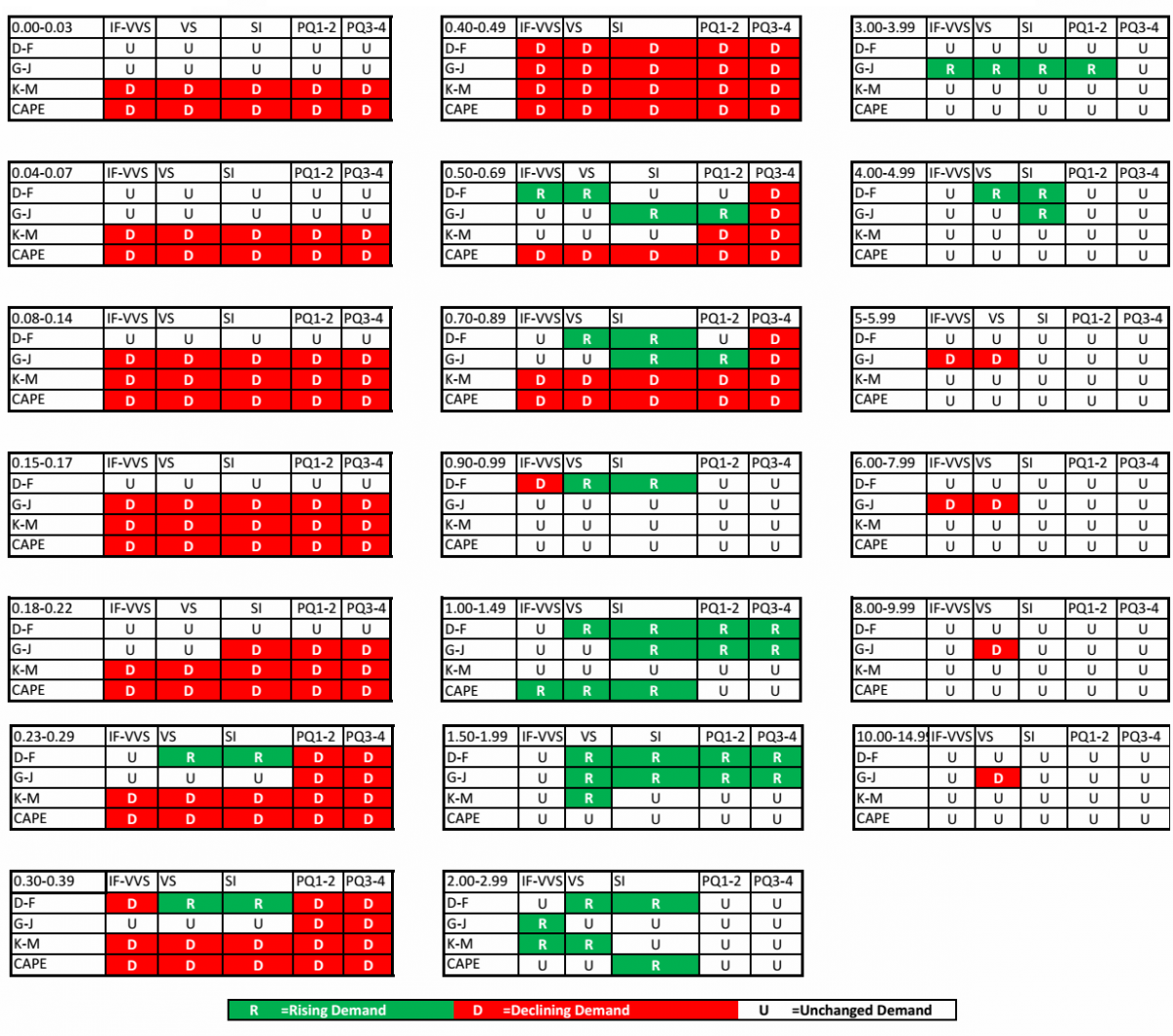 With requests declining, why pay more?

If I had to put the report above into a single sentence, it would be that in the past two months, retailer and jewelry manufacturer requests for polished diamonds were, with a few exceptions, slow and steady with areas of growing declines. That means that the recent appetite for more rough diamonds at higher prices by manufacturers is simply unexplainable.

When examining changes in the inventory held by manufacturers and wholesalers, we find that there is a buildup. Most of it is in 0.30-1.49 carat goods and in 2-3 carat goods. There are a few areas of declining inventories, such as in the 1.50 carat size range and a few other specific areas. This is in contrast to two dominate forces currently in the market – the slowdown ahead of Diwali and the decline in demand from the global markets.

Out of balance inventory makes sense in certain situations, such when inventories are created ahead of an expected surge in demand just prior to the November-December holidays. However, here is an out of sync inventory, as the following table shows. 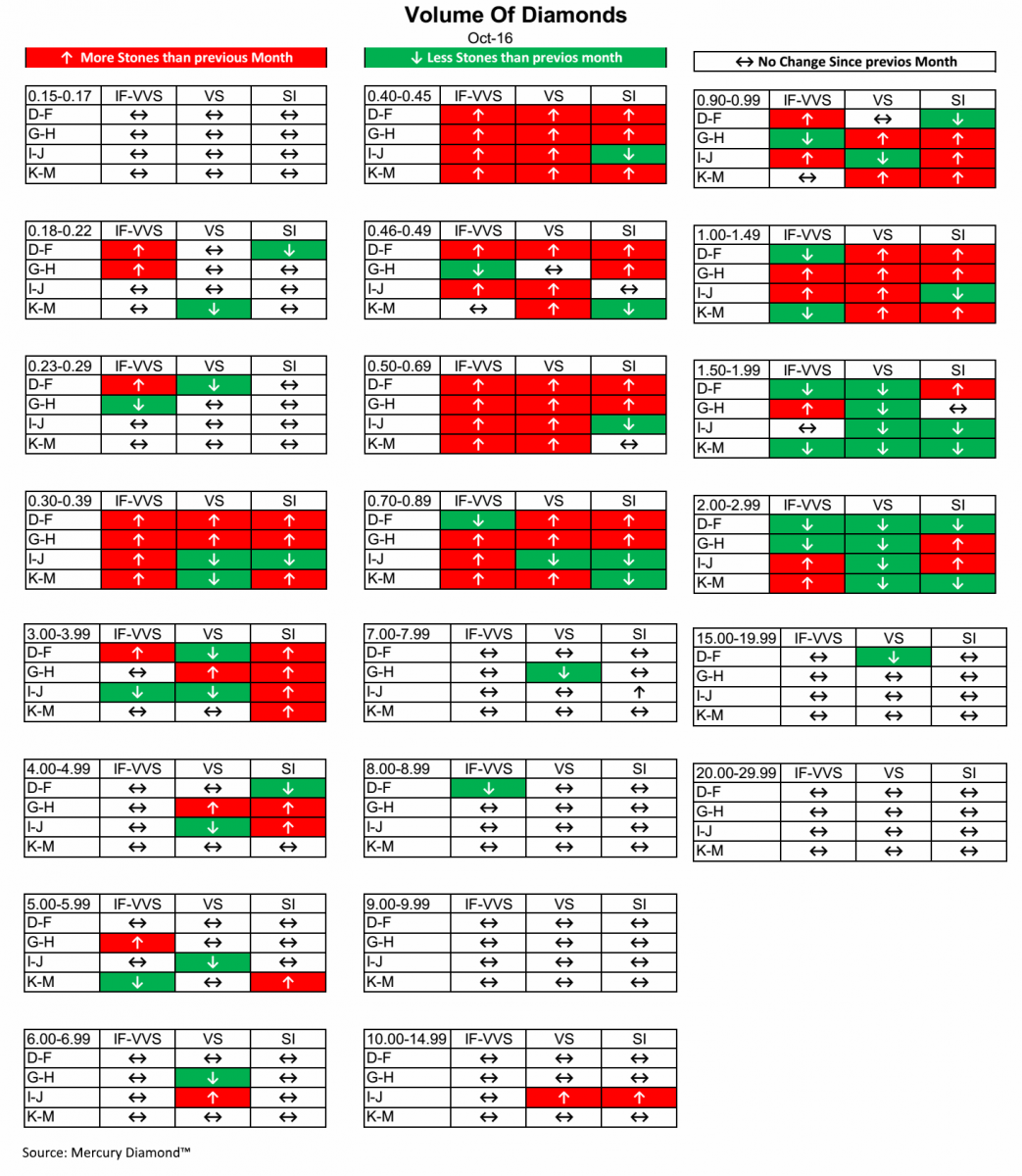 If first-hand rough diamond buyers feel they must protect their relationship with producers and, at the same time, protecting their factories and labor force is forcing them to buy expensive rough and sell it to the secondary market at an even higher price, then we are facing a business practice that is not sound.

This results in an oversupply of expensive polished diamonds that will be sold under pressure and at a loss. Worse, it will further push down the price of polished because of the economy of supply and demand. This is leading us to a bad place as an industry.

A possible solution is to accept the reality of long-term reduced demand and shrink manufacturing capacity to bring it in line with current and future commercial needs.

To reiterate, this is a snowball situation that must be stopped. Turning down expensive and unprofitable rough diamonds and manufacturing to real demand is the correct approach. Anything else will only delay of the inevitable end.

Tweet
Prices are Sinking, No Matter How You Measure Them
Ten Unusual Diamond Shapes