Demand for polished diamonds in September softened overall. A combination of holidays and a trade show in Hong Kong, a city that was hit by massive typhoons, slowed down activity in the market. With a cyclical decline in retail activity among jewelry retailers, the good demand seen in August has declined too.

Wholesale trade in polished diamonds slowed down after the summer peak. Independent retailers reported that they had a good selling period, and are therefore optimistic about the future. American wholesalers who travelled to the Hong Kong trade fair early in the month were less than enthusiastic about it, mainly because of the limited polished diamond trade that took place at the show. They were so disappointed that some said that they don’t expect to return to the show in the next few years.

The New York Diamond Dealers Club, the local diamond exchange, hosted an Indian Week during the month. According to traders, it did not go well. Smaller traders do not buy much, and larger sellers, which are often manufacturers, did not want to reduce prices to cater to local polished traders.

Demand for loose polished diamonds slowed in September compared to August, however there were some pockets of increased activity. Rounds of 1 to 2-carats are selling relatively well, but only if they are top quality and certified triple excellent.

Polished diamond trading in India was impacted by the price of rough diamonds and the sluggish Hong Kong show in September. Indian traders had hoped for a strong showing at Hong Kong show, and held on to their goods and prices ahead of the show. The shortened show and the limited traffic both negatively impacted sales.

The cost of rough diamonds was relatively high, resulting in manufacturers insisting on the higher prices for polished goods for fear that if they reduce prices, their profitability would erode and it would be tougher to afford buying rough diamonds again. However, as strong as they held, the disappointing sales in Hong Kong mean that they may be forced to reduce prices simply to protect their cash flow. With Israeli traders more willing to reduce prices, Indian traders may have no choice but to do the same.

Other than the trade fair, demand in the Mumbai market was steady, with a rise in demand for top color and clarity round fifths and grainers.

The Hong Kong Jewellery & Gem Fair was disappointing, according to exhibitors and visitors alike. The show was scheduled to run right around an Indian holiday and wedged between two Jewish holidays, which reduced the number of attendees in advance. As super typhoon Mangkhut approached the Island, many visitors canceled their trips, further reducing traffic. Finally, the severity of the storm forced organizers to close the show early, reducing the number of days the show ran.

But it was not only poor scheduling and weather that hurt the show. The ongoing trade war between the US and China, the strong US dollar against the Indian rupee and Chinese renminbi meant that in local currencies, prices of polished diamonds actually increased. Coupled with the desire to keep prices of polished diamonds steady due to the rising costs of rough diamonds, the trade show was harmed in every possible way. As a result, after a relatively good first day, prices were largely steady and the volume of transactions was very limited.

At the same time, traders are reporting that wholesale prices of stars and melee are down by approximately 5%. Demand for fancy shapes was slow.

The combination of the Hong Kong show and a number of Jewish holidays in the middle of the week this year meant that there were not many working days at the Israeli diamond exchange in September.

Shortages in goods, as well as the price of rough diamonds, held the prices of polished diamonds in place. While the Israeli traders are pricing many of the goods somewhat lower than they are priced in the Indian diamond market, the unwillingness of Indian traders to budge on price is helping Israeli traders keep their prices steady.

Demand was focused on very specific goods: there is steady demand for rounds, G-N colors, ranging from 1-2-carats, and their prices are holding steady. Demand for smaller goods, commonly referred to as melee, declined during the month, leading to a corresponding decline in price. Some traders claim that the decline in prices is the result of the proliferation of lab-grown diamonds. 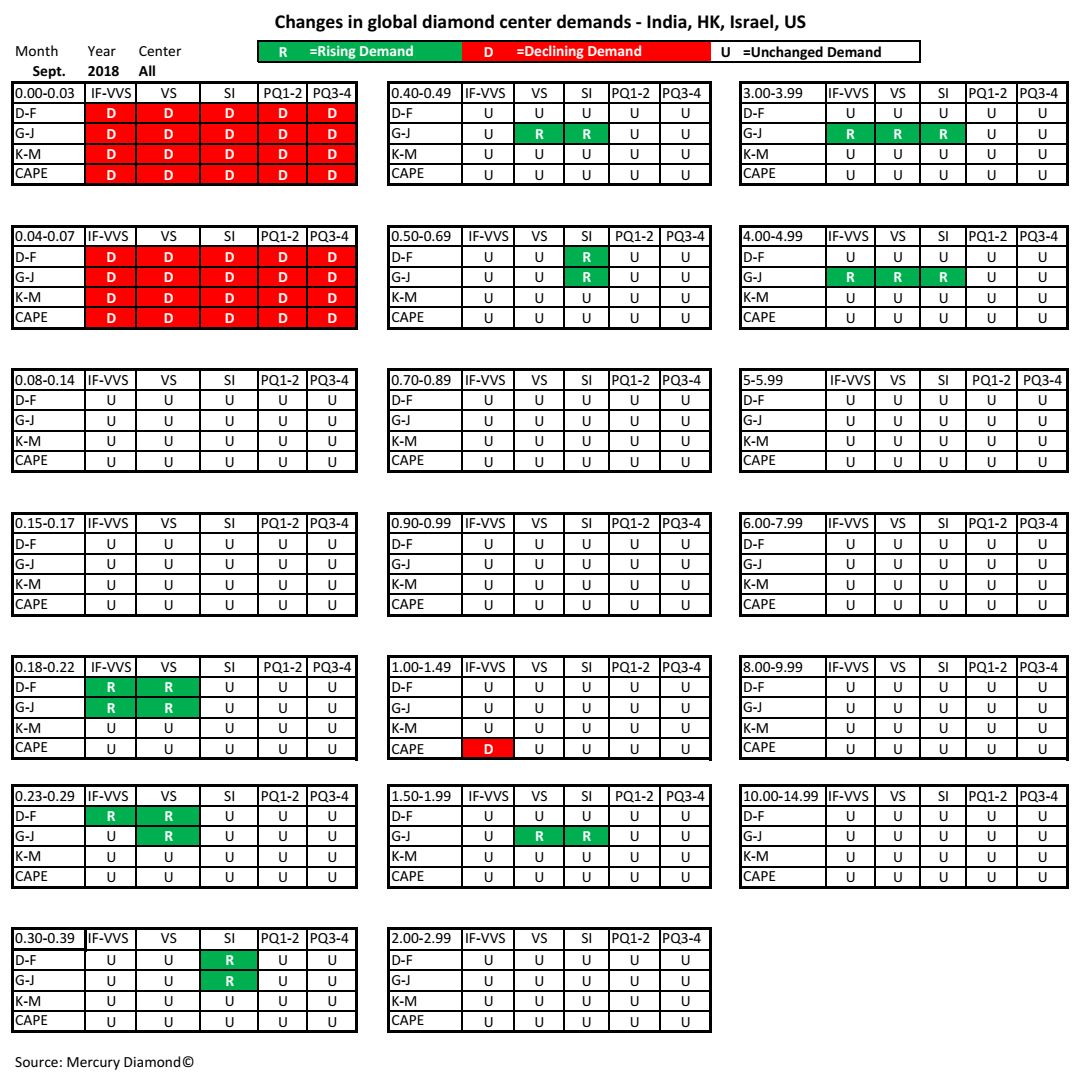