Survival Mode: Why The Diamond Industry’s Credit Addiction is Leading Us Down the Wrong Path

Allow me to state my view plainly: the large number of rough diamonds purchased from the main rough diamond miners in the last two months (January and February) were not purchased for the purpose of long-term growth. Nor is this phenomenon a response to any great polished diamond demand. The leading driver of this demand is survivalism.

Even if we assume that the supply in March will be relatively small (only $500 million) the midstream will be flooded with some $3 billion worth of rough diamonds during the first quarter of 2016.

As pointed out last week, if $3 billion worth of rough diamonds are to be supplied during the first quarter of the year, they will be offered as polished during the second quarter, which is traditionally a slower quarter for diamond jewelry sales.

To whom will manufacturers and wholesalers sell these polished diamonds, worth some $3-3.5 billion? After a mediocre holiday season, a very slow Chinese New Year and an okay Valentine’s Day, it is not reasonable to expect all of this stock to go to jewelers. In all fairness, I must add that there are a few differing opinions in the market, arguing that the entire production will be digested in whole. Some commentators believe that there is enough demand and enough shortages to take this up.

From what I see, current demands are for smaller round goods, mainly 0.01-0.50 carats in all clarities and better colors, and for 1 carats.

A closer look at the market

Why are primary buyers not asking for an increase in the supply of rough (which generate the goods that are in shortage) and manufacture those goods themselves? Such a move would kill the premiums that are paid when goods are sold to the secondary market, premiums which serve as a signal to the producers to raise prices.

Do these primary buyers, these more established diamond firms, know something that the secondary market does not know? After all, in a stable market, when there is such a strong demand, and there is money to be made, why wouldn’t the strong players jump at the opportunity? These companies signed agreements with the producers to buy and manufacture these goods in the first place. Why are they not doing this?

A possible explanation may be found in an analysis of demands in the market we did at Mercury Diamond™, shown in the following tables. The demands are for rounds during February of this year, taking into account the main polished diamond centers at the midstream of the diamond pipeline.

As you can see, there are specific demands in the market for certain goods. However, the demands are not across the board. In fact, there are more unchanged and declining demands than demand increases. These figures raise the following question: why buy entire productions of run-of-mine when the real needs are so specific? 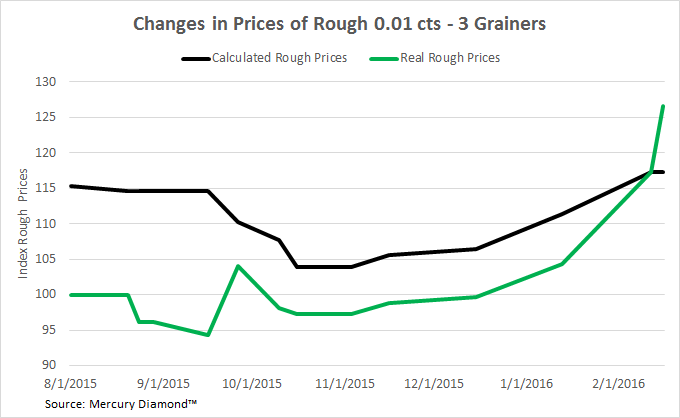 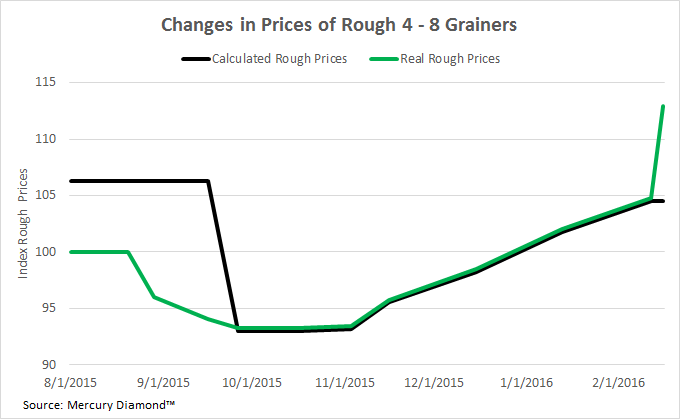 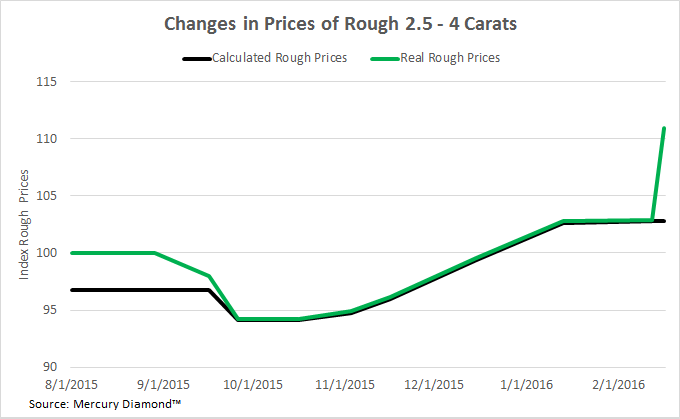 As you can see in the three graphs above, following the sharp reduction in rough diamond prices in August of last year, manufacturers had at times some room for profitability with some of the rough: usually, a few percent points at best. The larger rough, 2.5-4 carats, were not profitable or were just marginally so.

In the past few weeks, due to large premiums paid for rough diamonds during the first Sight, all the rough tracked here became too expensive and probably not profitable to manufacture. This spike in prices, in the mid-single percent, was enough to turn the story around from partially and only marginally profitable to not profitable at all.

Finally, here is another tool I developed that tracks inventory levels in the industry. Below is a month-over-month comparison of inventories of round shape, GIA certified, Triple X, no florescence diamonds, February compared to January. The green shows where inventories have declined, red where inventories increased. 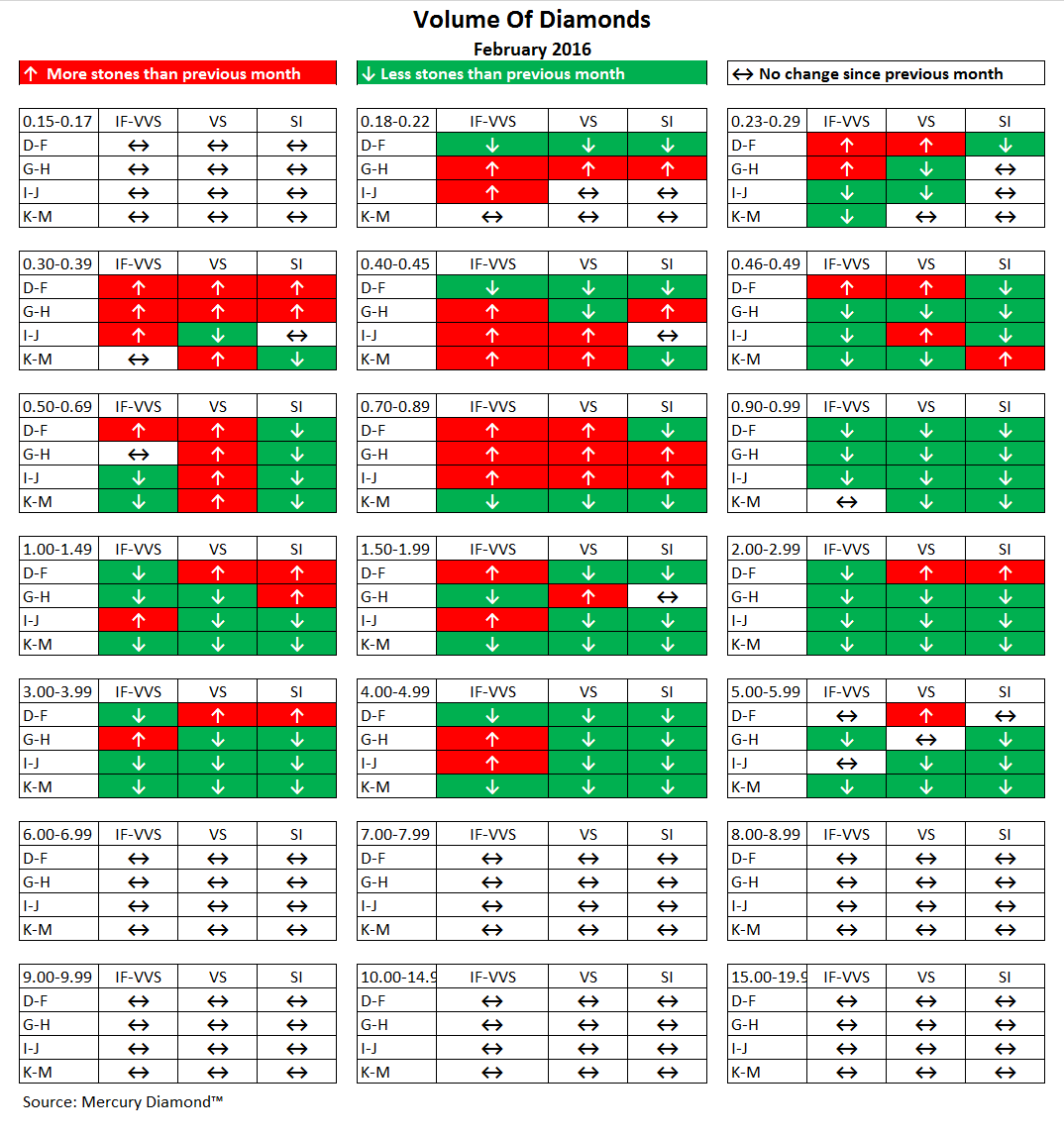 Of the 252 categories represented in the above table, 96 categories, a little over a third, show a decrease in inventory, 53 an increase in inventory and 103 categories are unchanged. Clearly there is a reduction in inventory. This is good news: one of the issues at the core of this crisis was that the midstream was sitting on a huge stockpile that tied up capital. We all knew that inventory reductions were needed.

On the other hand, we also see that the areas where there is a decrease in inventory levels do not correspond to the demand levels - there is a large disconnect between the two. Another issue is that overall, two thirds of the categories (62%) are not indicating any shortages at all. So once again, why buy a full range of production? Doing so does not serve the real needs of the industry.

Put together, there are demands for higher color rounds, mostly in the 0.01-0.49 carat range, and some specific demands for 0.50-1.49 carat size rounds. Rough yielding these polished diamonds has become expensive and unprofitable, and the inventory levels for the goods in demand have mostly increased or have not changed.

When put this way, it is obvious that the needed rough is being purchased, but there is a flood of unneeded and high-cost rough that is purchased along with it. In my view, this does not indicate the improving health of the market: on the contrary.

With hardly any orders coming from retailers in the US or China, or even from the large brands, most of the demand seems to be inner-trade. And if most of the business is among manufacturers and wholesalers, that is another sign that this is mostly speculation. Speculation is bad. It tells us that most of the rough goods are not purchased against consumer demand, which is clearly not healthy because it won’t generate an influx of money up the stream, the very basic tenet of business.

The main market players agree that the trade is very short term in nature. However, this short-term activity helps them generate a cash flow and some profit, “so why not,” they say.

The issue is that most don’t expect the polish diamonds made from this heavy trade in rough to be sold at the quantities that rough is purchased.

Buyers from primary rough diamond suppliers are not selling all the rough goods they buy. They manufacture the rough that will satisfy the real polished diamond shortages in the market and together with the premiums from selling the rest of the rough they will generate 4-5% on the money. That income will be mostly used to cover running costs and the reminder kept for a rainy day. That rainy day might be next month, if the current momentum in the market ends.

For now, they are busy with quick trading, in and out.

Everything we see indicates that the current business activity is a slow advancement. This business activity is not based on growth driven by consumer demand for polished diamonds. It seems to be purely opportunistic in nature. The players, the larger firms, primary buyers and manufacturers, are not leading to long-term stability. My guess – because they feel they have no other choice.

Other market players say that the excessive rough purchases are a way to use the recently provided credit made available to them by the banks in India. This for the purpose of raising and establishing a new level of credit worthiness.

Here in Europe, the banks are adopting a wholly different approach, collecting as much of the credit as possible and limiting its supply to anyone that appears to be in any way a possible problematic client. You could argue that they are taking a contrary approach, but in this time of financial misery their approach is entirely reasonable.

Is the market changing? Is the fact that the majority of global diamond polishing by value and volume is concentrated in one geographic location with a single approach is leading us into a new era, one where creating value for consumers is secondary to simply “getting by”?

In the past we had several centers where rough was traded, credit was made available, and polished was manufactured. Their differences in style, knowledge and approach helped shape and improve each other. Above all, diversity created balance in the sector. With that diversity largely gone, you could argue that Indian banks and their overabundance of credit supply and loans are dictating how the entire diamond pipeline behaves.

Being hooked on bank credit means that not only the Indian diamond sector, but also the entire global diamond industry, is doomed to take part in a business based on survivalism.

Survivalism in this context is thinking in the short term to generate a quick profit. I for one, would rather be a traditionalist and stick with the school of thought that bases the foundations on long-term healthy consumer demand, and build everything up from there.