I was recently shown an interesting diamond brooch that was custom made for a family whose eldest daughter had just graduated from university. The young girl’s father had a diamond made into the shape of her school’s logo. While many consumers are aware of a few different diamond shapes, diamond manufacturers have been experimenting with many others outside of the traditional and most popular round brilliant and princess shapes.

When we talk about unusual diamond cuts, the Horse Head is one that a surprising number of people are familiar with. The shape was invented by Henri Daussi Loots, an Antwerp master diamond cutter, founder of the New York based jewelry company that still bears his name. The Horse Head is more common than one might expect and GIA even has a ‘Horse Brilliant’ shape definition for grading Horse Head diamonds. While there are many examples of poorly cut Horse Heads that only superficially resemble a horse, a well-cut stone is unmistakable. Some more adventurous cutters even claim to be able to create stones that distinguish between a mare and a stallion. 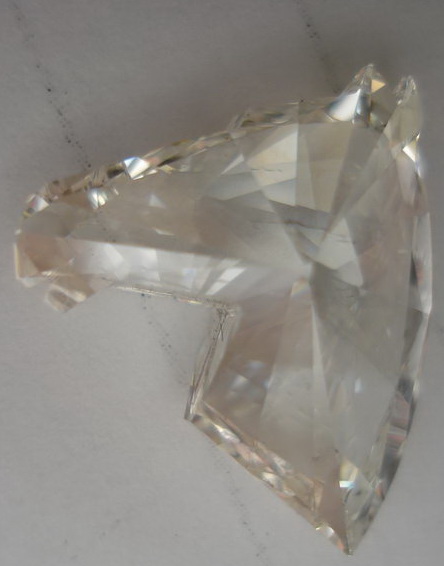 The Buddha cut was co-designed in 1995 by a Buddhist member of the Japanese Soto Zen Federation and Oliver Korn for J. Korn & Partners in Antwerp. It is made into the shape of a meditating Buddha. The shape is often the centerpiece of much more elaborate jewelry designs that are often customized for individual consumers’ personal tastes and religious principles.

The patented Buddha cut has a very exacting definition, including 33 crown facets, 21 pavilion facets and a culet. For religious reasons, Buddha’s head must be free of any inclusions, however no such restrictions apply to the body . This makes it a more challenging cut to manufacture and also leads to higher weight losses than traditional fancy cuts, in the range of 65-70% loss. The International Gemological Institute (IGI) officially recognizes the cut as ‘fancy shape Buddha’ in its grading certificates. Unsurprisingly, the principle markets for the Buddha cut are in Asia, primarily in Japan and Taiwan.

Another diamond shape built with religious overtones is the 10 Commandments diamond manufactured by Trillion Diamond Company, and patented in 2006. The diamond is first cut into the shape of the tablets on which the 10 Commandments were written and then the commandments themselves are permanently laser etched onto the back of the stone, easily read with a magnifying glass. These diamonds are typically mounted in pendant settings to be worn close to the owner’s heart and are available in 3 versions Protestant, Catholic and Jewish. The US patent for the ‘Butterfly Gem’, describes the stone as follows: A cut stone having a crown (21) and a pavilion (23), the crown having peripherally four indents orientated face to face and forming a cross, the appearance of the crown of the stone forming a butterfly.

Canadian Guy Couture, who holds numerous patents in the jewelry industry - including unique clasps - developed the cut and the patent in 1998. The Butterfly Gem is licensed exclusively through a Quebec based company called ‘Papillon Gemme,’ which is French for Butterfly Gem. Although butterflies are a popular choice for jewelry manufacturers and other diamond shapes are frequently fashioned into butterflies, the Butterfly Gem is the only cut where an entire single stone is formed into a shape resembling the winged insect.

An Israeli diamond company, Elanor Agam Jewelry, was the first to fully facet a single rough diamond into a Star of David, or Shield of David, as it is commonly known in Hebrew. The proprietary shape is a brilliant cut, however it loses a significant portion of its rough size and is said to be one of the most difficult shapes to cut. Even the company’s expertly trained cutters sometimes encounter problems with diamonds breaking in the manufacturing process, and each stone is an exercise in patience and precision.

The UK flag diamond is an eye-catching cut that displays the familiar Union Jack within the pavilion facets of an emerald cut stone. It was first developed to celebrate the Diamond Jubilee of Queen Elizabeth II. The UK Flag is a patented cut developed by Israeli firm Davidi Diamonds. All UK Flag diamonds are manufactured in Davidi’s factory in Israel.

Tweet
September and October Demands Reveal Slow Market
Where are the profits?