The Awakening of Diamonds in China

China, among the most ancient nations on earth, has one of the oldest jewelry industries in the world. However it is a relative newcomer to diamonds and the diamond industry as a center.

China has it all: a growing consumer population with a growing appetite for all diamond related aspects - jewelry, diamond and jewelry manufacturing, loose diamond trading, a diamond exchange, and even diamond mining. In short, China is a fully integrated diamond country.

Historically, China’s jewelry trade was limited to gold and jade. Even now, gold is often purchased as a store of value, and not necessarily as an adornment. As such, jewelry design is not always important. The purchase and gifting of jades, on the other hand, combine both beauty and sound economic thought.

China’s relationship with diamonds is short, yet meaningful. Its first diamond manufacturing facilities were established in the 1980s. They were mostly operations that relocated from Hong Kong to China in order to harness the lower labor costs.

By the 1990s, as China continued to open up, more and more diamond factories established polishing facilities in developing industrial regions such as Guangzhou in the country’s southeast, near Hong Kong. The product range slowly expanded and the quality of workmanship improved. Concurrently, the Chinese government offered financial benefits and incentives to attract more diamond and jewelry factories.

During this period, the Chinese economy experienced a great expansion and, combined with the easing of property ownership and rising incomes, more and more people accumulated personal wealth. This gave rise to the development of a large wealthy and middle-class population that began developing a penchant for western luxury items, including diamond jewelry.

Responding to this trend, De Beers launched major marketing campaigns for generic diamonds in 1993, using the ‘a diamond is forever’ slogan. First popular in Beijing and Shanghai, the trend spread to other major cities throughout China. The ongoing campaign proved exceptionally successful, promoting diamond jewelry wedding gift to a ‘must have’ status. Prior to the campaign, diamond engagement and wedding rings were not part of the Chinese tradition.

In the following decade, wedding rings proved to be an important driver of the Chinese diamond market. In 2000, China’s total jewelry market was estimated at $9.2 billion. In 2005, Chinese government statistics suggest that demand for diamond jewelry reached roughly $1.1 billion. During this period, overall jewelry consumption increased at an estimated annual rate of 10%-15%.

In terms of diamond consumption, China was the world’s third largest market in 2008, with an 8% global market share following the US and Japan. A year later, it was already the world’s second largest diamond consumer market, with an estimated diamond jewelry retail sales of $1.2-$1.3 billion, according to official figures.

In 2009, Shanghai Diamond Exchange imports increased by 16.4%, reaching over $1.5 billion and China’s overall jewelry sales for 2010 were estimated at over $21 billion, doubling within a decade of rapid economic growth. At this point, diamond wedding rings were already a well-established practice, comprising an estimated 50% of total jewelry sales. Spreading from China’s largest cities to 2nd and 3rd tier metropolitan centers, an estimated 80% of brides are wed with a diamond ring in the former and some 65% in the latter. Diamond rings represent about 10% of the cost of a wedding.

Upon recognizing the need for organizing diamond trade, the Shanghai Diamond Exchange (SDE) was established in 2000, serving as the only channel for importing and exporting diamonds in China.

The SDE consisted of only 41 members at launch and, in 2014, this figure increased to 364, 248 of which are foreign firms from India, Israel, Belgium, South Africa, U.S., Japan, Hong Kong and Taiwan. Some 50 SDE members own national jewelry brands; many members have processing factories in China.

These facilities currently polish the full range of goods, from the smallest sizes to five-carat items. In many places, they provide excellent polished goods. Although locally polished goods serve the global market, these facilities focus on goods sold to the local market. They include 0.30-2 carats, G-J color in VS-VVS qualities.

China has a small diamond mining industry. Most of the mines are located in Shandong Province. Most notable is the 701 Changma Diamond Mine, which produced over 1 million carats to date. The annual production capacity was estimated at 50,000 carats, but China’s total production has fallen below that level, according to Kimberley Process figures. 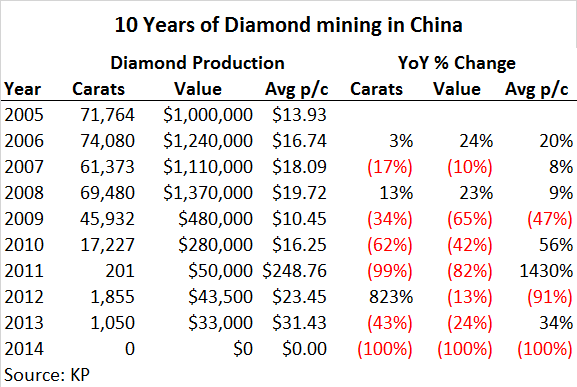