The Case for Reducing Supply in Today’s Market

The large diamond miners and major suppliers to the market offered large quantities of diamonds this cycle, as expected. List prices were generally steady, with one notable exception. Yet retailers and wholesalers with large polished diamond inventories are not buying diamond jewelry at a quick pace, even in the U.S. where business is the healthiest.

The De Beers Sight in Botswana last week offered some $600 million worth of goods, plus another $50 million in ex-plan requests. According to Sightholders, De Beers did not lower list prices. However, assortments were reported to be on the lower side, which means that in effect prices were higher.

The reason for the lower assortments is not known. In the past, it indicated changes in production. This is part of the nature of mining: a certain level of inconsistency is to be expected. Sightholders expected that prices would be adjusted, but that was not the case.

De Beers’ price list showed a wide combination of price changes, both up and down. Some changed as little as a fraction of a percent, while in other areas the changes were more than 10%. These fluctuations are to be expected sometimes. The problem is that no polished diamond item increased in demand to call for a double-digit increase in price.

The response on the part of Sightholders was dissatisfaction. They expected De Beers to keep prices steady, at the very least. The one thing that everyone in the industry is looking for is stability, which seems more elusive than ever.

Just as with the May Sight, the $50 million worth of requests for ex-plan goods was for the few items that are actually in demand, and for which manufacturing is still profitable. These goods are mostly for the American market. If the price for this rough is too high, thereby erasing the profit that can be made from the polished, then interest in these goods is lost. According to Sightholders, that was the case for some of the items.

It is not clear how many of the goods were refused. Insiders speak of as low as 10% of Sight goods that were refused, to as much as 35% and even 40%. Because of the prices, some of the ex-plan was not purchased either. Buyers preferred logic to emotion and decided to buy only the goods that they can use profitably. Most of the rest was left behind.

Alrosa, on the other hand, has reportedly increased list prices during the last supply cycle. Alrosa buyers are talking of a 2-3% price increase. Once again, it must be asked: why? If the market is at best steady and not shrinking anymore, supplying the market with pricy goods is at best surprising.

It should be noted that there is a change in the consumer market. Demand for the larger goods, such as 3-5 carat Rounds in G-H colors and VS2-SI2 clarities, has shifted. They used to be a popular item in the American market. When buyers in China started to show interest in them, their prices increased and the American market purchased less as they became too expensive. With the increase in wholesale price came an increase in the price of the rough.

Today, Chinese buyers no longer seek these goods and the price has declined back to its original level. This has brought back the interest of the U.S. market. But what happened to the price of the rough diamonds that make these goods? They remained high. Not only that, during the latest supply cycle their prices were increased even further by main suppliers. The result could be that where there is finally some demand, manufacturers won’t polish them because the price of rough is prohibitive.

The mid-stream of the diamond market – the manufacturers and wholesalers – is finding ways to adapt to the continued situation of the market. They buy what they can afford, send their staff on extended vacations to decrease the amount of work at the factories, negotiate better bank terms and do their best to decrease the level of inventories that are tying up a big chunk of their financial resources.

At the same time, they are doing their best to keep prices high. At the recent Las Vegas show, traders held on to prices wherever they could. There was demand and transactions for typical American goods: 2 carats and below, in the GHI color range, SI-I clarity goods with some VS2s. For those goods, wholesalers did not compromise on price.

For the smaller and lower cost goods, the situation was different. To keep costs down, in recent months manufacturers have kept their factories busy with lower cost rough that resulted in lower value polished – a combination of lower color, lower clarity and smaller sizes. In this range of polished diamonds, there is a large supply and a good amount of financial ability is tied to it. Those goods were in less demand, and the prices in many instances were brought down even further. This generates cash flow, but not at the desired level.

Last month, demand for round polished diamonds decreased. There was a decline in demand in almost every diamond size range, especially in smaller size goods of 1 carat and below. Rounds weighing 1.50-carats to 2-carats saw an increase in demand, probably in anticipation for the Las Vegas trade show.

According to an updated analysis of demand for round polished diamonds in the current market, demand has stabilized (see table below). Demand is largely unchanged, as both retailers and jewelry makers do not have – and do not currently anticipate – growing demand from consumers. 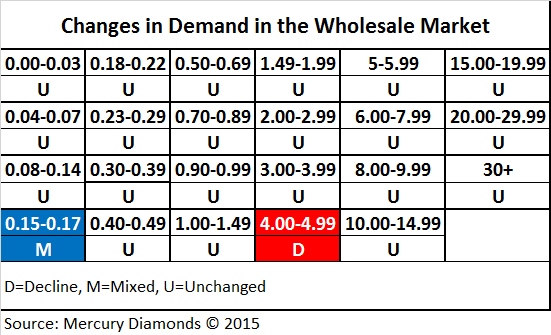 Retailers in the U.S. are buying carefully and selectively. If the diamond and jewelry industries learned something from the Las Vegas trade show, it was that cost considerations are paramount these days, and the anticipation for a turnaround because of the show was a little misplaced.

Chains are buying diamonds and designing new lines with the understanding that the American consumer wants affordable jewelry that is fashionable, unique and easily replaced. To capture their attention, retailers are looking for different diamond shapes, such as cushions, or small side stones to dress up items and spark demand on the part of consumers. Whether it will work without the necessary marketing is yet to be seen.

The total value of Alrosa’s supply this cycle is estimated at $350 million worth of rough diamonds. Between Alrosa and De Beers, that is a $1 billion worth of supply in a difficult market.

If annual supply is around $15-$16 billion, then on average each cycle should be about $1.5-$1.6 billion (there are 10 rough cycles a year). You could argue that $1 billion in supply is not much. Alrosa and De Beers represent about 65% of the market. On average, the rest of the miners should supply some $500-$600 million worth of rough at the current cycle. Between Dominion, Rio Tinto, Gem Diamonds, Petra, Lucara and supplies from other producing countries, the supply during the current cycle is about that much. However, it must be asked: is this a typical period? Is demand for polished about average?

The U.S. market is simply moving ahead. Demand from China and India is not growing, and possibly even shrinking. The Middle East and Russia are suffering from the loss revenues of lower energy prices, and Europe is a small market for diamond jewelry. Maybe it is not reasonable to expect global consumer demand to grow right now, and therefore mining supply adjustments are necessary.

Another issue to take into consideration is the level of polished diamond inventory. Wholesalers, mostly in India, have high inventories of practically the full range of polished goods. If the current level of polished supply to jewelry makers and retailers is so high that polished is accumulating at wholesalers, then it is reasonable to consider decreasing rough diamond supplies – instead of matching or even exceeding regular supply levels.

The Diamond that Makes Every Woman a Princess
Priorities for the new Diamond Producer Associatio...