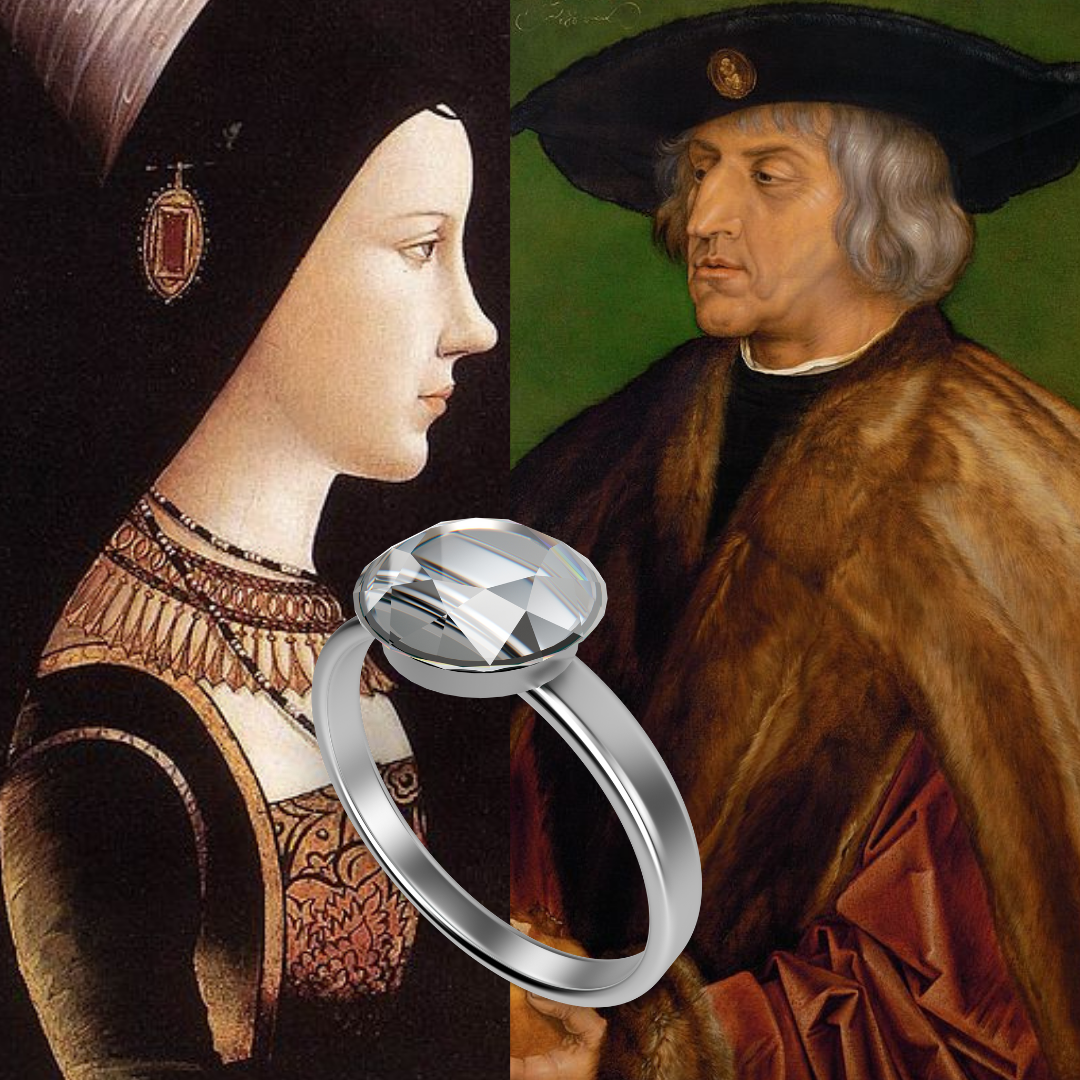 Maximilian I, also known as Archduke Maximilian of Austria, was King of the Romans for 33 years, from 1486 through his death in 1519. He was born outside of Vienna to Frederick III, Holy Roman Emperor of the House of Habsburg. As a child, he lived under siege and suffered from starvation. Despite that episode in his life, he was one of the most powerful kings to rule in Europe, creating an empire that stretched from Netherlands in the north to Italy in the south, extending from Spain in the west to Poland in the east – although the empire in this form was never a single, uninterrupted land mass.

The young royal served uncharacteristically as co-king with his father, who went to war against Hungary. In 1493, upon his father death, Maximilian was also Holy Roman Emperor.

Mary of Burgundy was born in Brussels, the only child of Charles the Bold, Duke of Burgundy, and his wife Isabella of Bourbon. Her father was a wealthy royal with his own set of ambitions. He controlled Burgundy and most the Low Countries – namely today's Belgium and Netherlands. As the sole child and heir apparent of her father's vast and prosperous reign, Mary was considered a prized wife. Among her many suitors were princes from all of Europe's noble families, particularly those whose fathers felt that the lands Mary would one day control would make for a good addition to their existing domains.

Among them were the future King Ferdinand II of Aragon, when she was just five years old, and Charles the Duke of Berry and younger brother of King Louis XI of France. King Louis XI was especially anxious that she marry his son after her father died in a battle in 1477. At this point, and just shy of her 20th birthday, Mary understood that to protect herself and her duchy, she must marry. Probably turned off by the French and their pressing pursuit, she turned to the other leading power of the time, the Holy Roman Emperor.

Their union was a typical for royals at the time- a marriage of political convenience, a means to meet a strategic end. Regardless, her decision to wed then Prince Maximilian, resulted in an event that is etched in history to this day for a very different reason than political history. Maximilian gave Mary a diamond engagement ring. Although this is the earliest documented use of a diamond set in an engagement ring, it is believed that a good number of couples preceded them, though no direct and explicit documentation of such exists anymore, only hints of it.

Never the less, due to the great wealth and importance of this marriage, the betrothal with the diamond engagement ring at the imperial court of Vienna in 1477 was documented in writing and painting, as was the lavish wedding, which took place in Ghent on August 16 of that year. Their public standing had a social impact very similar to that of celebrities today: imitation. Mary's diamond engagement ring inspired other wealthy couples of her era. Diamond engagement rings became a trend among them.

According to documentation from the time, engagement rings were not typically set at all. Engagement rings given by Europe's wealthy were made of gold. The European trend of setting engagement rings with a gem apparently started around that time. Due to their extreme rarity – diamonds were mined in India and only some of them transported to Europe – diamonds were very high priced and very few could afford them. This may have strengthened diamonds' status as exceptionally special. Over the centuries, diamonds slowly became more available, following the discovery of diamonds in Brazil and later in Africa. The growing availability of diamonds did not harm the desire for diamond set engagement rings. Instead, thanks to De Beers' "a diamond is forever" marketing campaign, it became more prevalent, to the point that most engagement rings in the US and China are set with diamonds.

Mary and Maximillian had no way of knowing how well etched in history their engagement would become or even what economic impact it would have, although much of the drive behind their marriage was economic in nature. The marriage between the Burgundy heiress and the Habsburgs started an era of dispute between them and France that lasted until the early 18th century.

Mary saw very little of that. Although she sought to bring greater freedoms to those under her rule, she died after a hunting accident at the age of 25. Like many rulers of the era, Maximilian was a supporter of the arts and sciences. As a proponent of war as a method to achieve greater power, he also had a passion for armor, functional as well as an art form.

In 1496, Maximilian expelled all Jews from large parts of today's Austria, and in 1509 he passed the Imperial Confiscation Mandate, which ordered the destruction of all Jewish literature apart from the Bible.

Maximillian's political legacy shaped much of European history. After his death in 1519, at the age of 59, the Habsburg Empire, later morphed into the Austro-Hungarian Empire, which lasted another 400 years. Among his descendants is Queen Elizabeth II, one of the world's greatest diamond collectors.