The Great Diamond Slowdown of 2016, and Why We Need a Fresh Approach

We are in the middle of the summer, and trade has shifted gears to a slower pace. In August, many go on vacation, and the coming month is expected to be even slower than July.

Evidence of the slowdown, which hit its stride in June, can be found in any market report published in the past few weeks: “Markets weak during summer trading lull. Dealers frustrated by sluggish demand, rising inventory and tight profit. Rough market quiet with lower premiums during ALROSA sale,” Rapaport states in the opening of a weekly market comment.

In Europe, Polished Prices stated that “Diamond traders reported a sluggish week of trading ahead of the main summer holiday.  Sentiment is weak amid concerns of tight liquidity and high inventory levels in the cutting centres.” My own research finds that the slowdown started months ago, with a slow trade fair in Hong Kong in March , that continued through the June Las Vegas show, and remains slow today according to our most recent analysis.

The slowdown even impacted India at a time when it usually sees a small pickup – late July-early August - when the other trading centers start reducing activity ahead of the summer vacation. Talking with friends and colleagues, I hear the same from all directions.

The reasons for this slowdown are clear: a decline in consumer demand for diamond jewelry in the US, a yearlong drop in consumer demand in China that did not improve during the February holiday period, and which remains low. In Japan, demand has been declining for more than a year, and in India, the expected rise in demand is not materializing.

Logic suggests that the weak demand for diamond jewelry translates into weak demand for polished, which in turn should result in a decline in rough diamond demand. Has that happened? On Friday, De Beers reported its half year results, stating that sales volume increased more than 29% to 17.2 million carats, and revenue from rough diamond sales increased 11% to $3.1 billion. This means that the market purchased more rough diamonds during a period when demand from the consumer market has actually been in significant decline.

De Beers must have been surprised too – it reduced production by more than 14.5% in anticipation of a decline in demand from the manufacturing sector. After all, we wrote a year ago that consumer demand is slowing down and inventories of polished diamonds are piling up in the midstream. De Beers reported that rough diamond prices declined 14% during the period, as well as “positive growth in demand for rough diamonds in H1 2016.”

The result of this behavior is that there is an oversupply of polished diamonds and this pushes their prices down. It’s a vicious cycle that hurts margins, profitability and viability.

The quick, and arguably excessive, restocking of the midstream when demand is low is a reoccurring scenario. I can understand the allure of lower rough prices, but lower prices of your raw material is only one component of a successful business equation: you must have buyers for your goods on the other side of that equation, but that is not happening.

Some of the motivation to buy has to do with a banking system that encourages borrowers to keep buying at a certain level of activity to maintain their credit level. But that is not very healthy. If banks were more flexible in this regard, there would be less pressure to buy rough diamonds.

There are more reasons for these purchases: very large factories that need to be kept operating, a labor force that needs to be kept busy, rolling old debts, and more. But running a profitable business is somehow forgotten.

It did not require much foresight to understand where things were going. In January, February, March, and in the following months,  we stated that the market is buying too many rough diamonds  (please see below the data for the past month). Even if consumer sentiment improves, the existing supply is too high, which means that, once again, inventories will rise and prices will fall even further.

In the past, price fluctuations happened over a period of years. Now, it’s a monthly occurrence. Because of this, wholesalers and retailers are unsure about how to time their purchases. This is not healthy, and even the banks providing the financing are worried. This has many implications, including reputational ones. Consumers who bought a diamond not too long ago will be disappointed when they run into a friend who bought a similar diamond just a few months later for less.

Look at the following two grids. They track global changes in demand and inventory for polished diamonds. As you can see, demand is mostly declining. There are many areas that are steady, and a few very specific and limited increases in demands. The steady areas are mostly stagnant, so they are not a sign of stability. 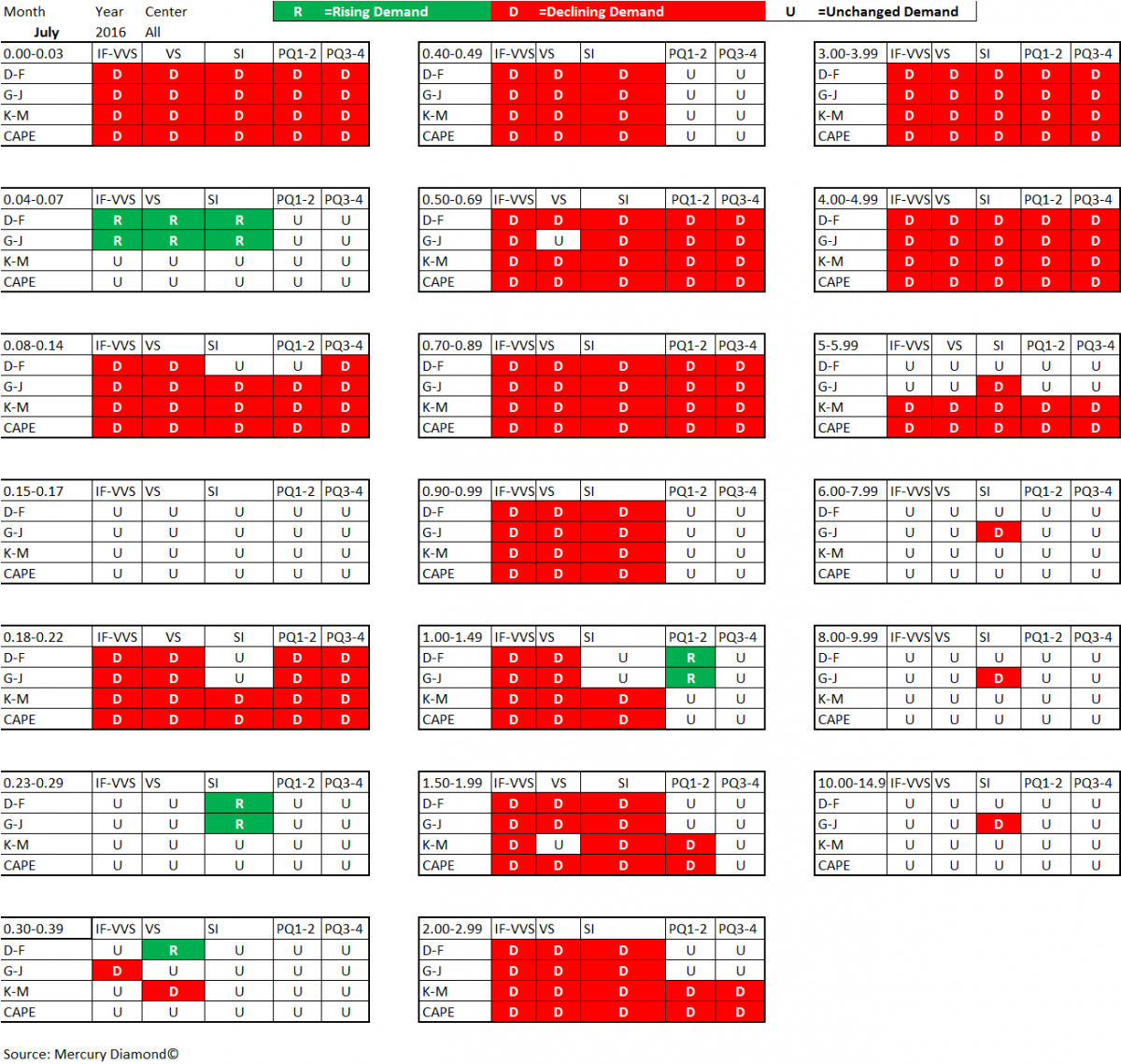 Now look at inventory levels. As you can see, there are more pointers (down to 0.23 cts) in stock in July than there were in June (red indicates an increased inventory). There is a decrease in inventory of 0.90 carats up to 5 carats, and the level of inventory is mostly unchanged for the rest – goods 0.22 carats and smaller and 6 carats and larger.

The increase in the amount of pointers in the 0.23-0.89 carat range is so large that it lifts the numbers for the entire industry. Inventory levels increased by double-digit numbers in a single month. That is very unhealthy, because it is capital tied to an asset that is not moving much. To quickly sum up, overall demand is declining, inventory is increasing (which is logical early on) and manufacturers are buying more rough. That last part is not logical in this situation. 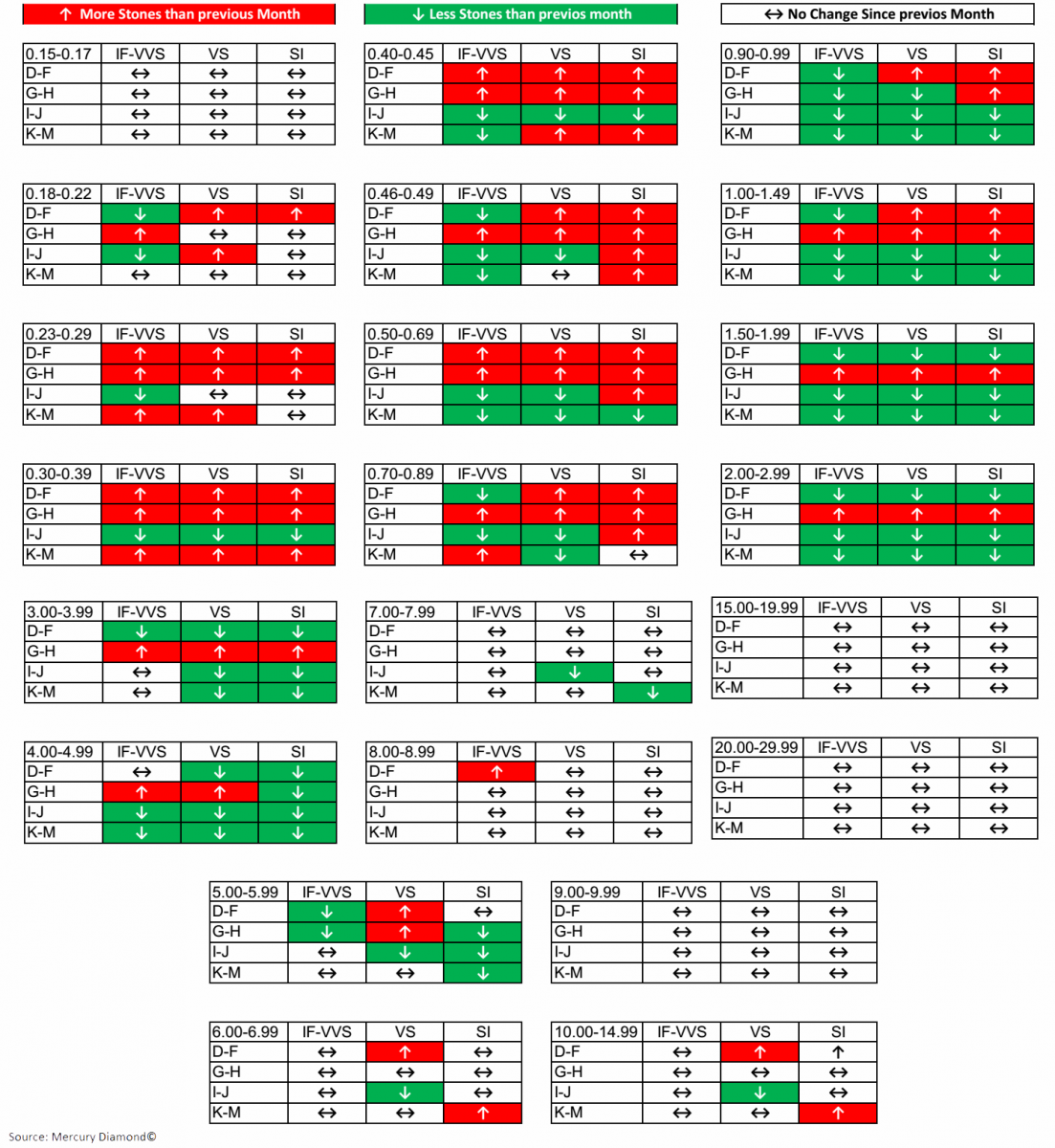 I’m afraid that midstream players are taking a short-term approach, and forget to think strategically. Years of a stable market may have let them to act in this way, but the market has now lost its stability. We need a fresh approach. If diamonds are rare, and they are, than they should behave as such: steady prices without sharp fluctuations, conservative credit terms, and definitely no 80% discounts to dump inventories on Black Friday.

The reason I published this article is to show that with the facts in hand, you can foresee the direction of the market. The series of warnings I made over the past year predicted the scenario we are in right now. Those interested can use the monthly demands and inventory to draw their own conclusions and act independently.

A modern business cannot force its product upon consumers or society just to make a profit. A modern business serves society by providing a worthwhile product while making a profit. The diamond industry as a whole needs to internalize this philosophy and shift to a modern and liberal service-oriented approach. Sadly, in my opinion the diamond industry has not fully understood this yet and is still working on the basis of the old model.