The Growing Rareness of Pink Diamonds So far in our examination of fancy colored diamonds, we have looked at the most common, yellow, and one of the least common fancy colors, blue. However, pink diamonds are perhaps the most sought after of all fancy color diamonds because of their beauty, and the romantic feelings that these diamonds stimulate in people. Although these diamonds are slightly more abundant than their blue counterparts, this is perhaps set to change in the near future and pink diamonds are currently highly coveted by those in the know.

Pink diamonds can be found in many mine productions around the world, but often in very small quantities of just a few stones per year, and mostly in very small sizes. The primary source for high quality pinks is the Argyle Diamond Mine in Australia, owned by mining giant Rio Tinto. Argyle began producing diamonds in 1983 and the company estimates that the mine is the source of 90% of the world’s pink diamond production. At its peak in 1994, the mine produced over 42 million carats per year, significantly above any other diamond mine operating today.

Pink diamonds are perhaps the only reason that this mine is even economical to develop, as only 5% of Argyle’s diamonds are gem quality, and of that only a small fraction are the highest value pinks. While the Argyle pinks can be priced anywhere from $100,000 per carat up to over $1 million per carat, the average price of the total mine production is around $25 per carat. Without the additional value from the pinks, this mine would likely never have come into existence.

The Argyle mine played an important role in the development of the Indian diamond manufacturing industry. The mine produced a massive supply of small, low-cost diamonds that previously would have been considered purely for industrial use. Indian cutting factories were developed in a quasi-partnership with Rio Tinto to address this challenge and find a suitable buyer for their diamonds. It is not a stretch to say that the Argyle pinks are largely responsible for making this industry transformation possible.

However, the Argyle mine is nearing the end of its life which means that the global supply of pink diamonds is set to decrease dramatically. The mine’s open pit has been exhausted, and production has now moved to an underground operation. The current mine plan has the underground mine exhausted around 2020, meaning there are only a few years left before this supply of pink diamonds vanishes, leaving no known supply to replace it.

The best and largest of the Argyle pinks are sold through an exclusive annual tender where the company cuts and polishes these stones. Only around 50-60 individual diamonds are offered each year. To put it in perspective, of the 130 million carats of diamonds produced annually, less than 20,000 carats of rough pinks are produced. This means they represent less than 0.015% of total production.

While many fancy colored diamonds get their color through the addition of some rare chemical impurity, this is not the case for pinks. Instead, pink diamonds are believed to get their color from a distortion in the crystal lattice structure of the stone. This is believed to be something that occurs after the diamond has begun to grow rather than at its inception, as in the case of other fancy colors. This distortion in the crystal structure results in internal graining in the stone, which causes pink color zones to appear. Scientists have still not fully cracked the code on pinks and their full cause remains something of a mystery to this day.

Obviously large pink stones are even rarer, and there are just a handful of pink diamonds in existence that are larger than 10-carats. In May I sold the Unique Pink for an astounding $31.6 million at Sotheby’s in Geneva, making it the most expensive Fancy Vivid pink diamond to ever sell at auction. The stone was a 15.38-carat pear shape VVS2 clarity and Type IIa. 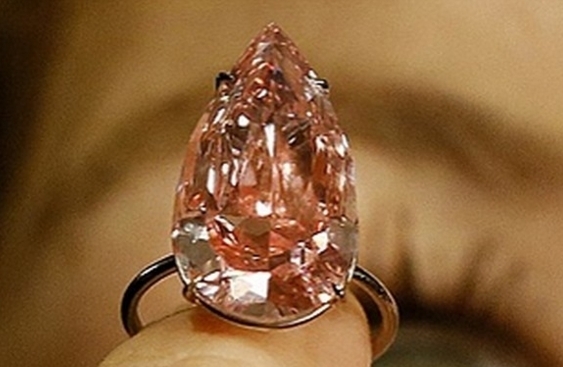 To those in the industry, pink diamonds have held a special place in our hearts for centuries. But pink diamonds gained some helpful mainstream notoriety in 2002 when Ben Affleck purchased a 6.1-carat pink diamond engagement ring for his then fiancée Jennifer Lopez. She reportedly returned the ring when they broke up in 2004. However history has seen a few other notable pink diamonds.

The largest known pink diamond is the Darya-I-Noor meaning Sea of Light. The stone is estimated to weigh 182-carats, and is a pale shade of pink with an antique table cut. The Darya-I-Noor currently forms part of the crown jewels of Iran. It was mined at the Paritala-Kollur mine in India and there are journal descriptions of the stone dating back to 1642.

Many historians believe that the rough stone may have been cut in two pieces, with the 60-carat Noor-Ul-Ain diamond representing the smaller part. In 1739, emperor Nader Shah of Persia invaded Northern India and occupied Delhi. As payment for returning the crown of India to the Mughal emperor, he took possession of the entire treasury of the Mughal Empire, including the Darya-I-Noor. 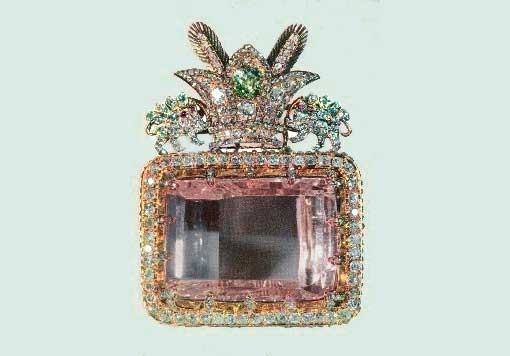 The Graff Pink is a 23.88-carat fancy vivid pink, internally flawless diamond; but this was not always the case. The stone was originally larger but showed some minor flaws and was first graded by the GIA as fancy intense pink. It was sold by Harry Winston in the 1950s to a private collector. It remained in private hands until it was put up for auction in 2010 and purchased by Laurence Graff. Graff had the diamond recut to remove flaws and, after losing 0.90-carats of diamond weight, the result was a fancy vivid pink, internally flawless stone that he promptly renamed “the Graff Pink.” 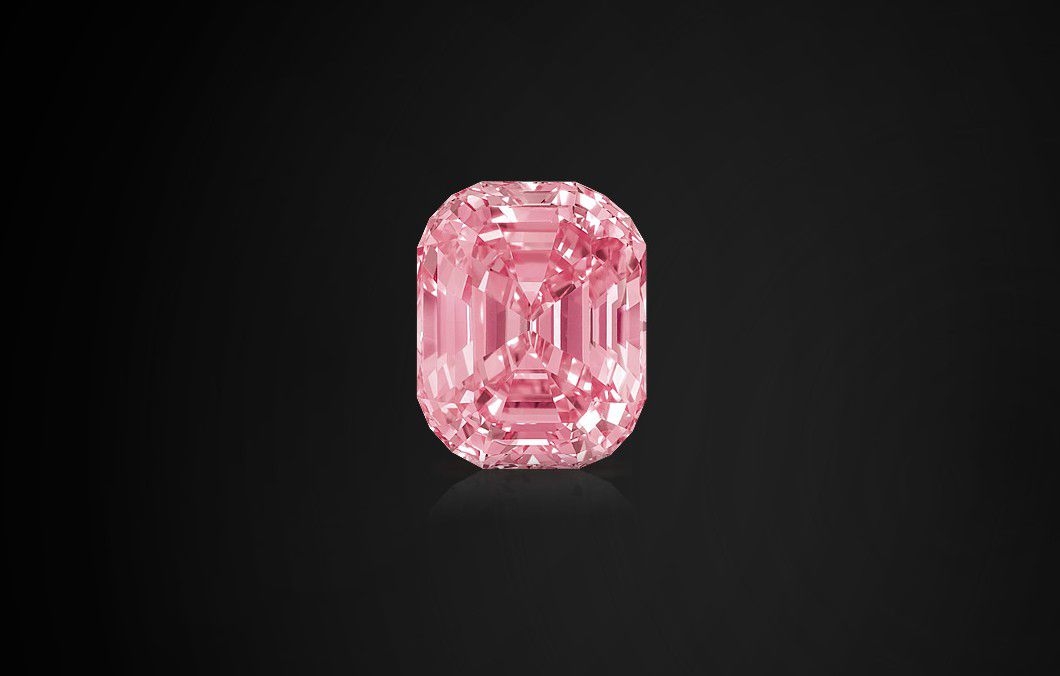 The largest known fancy vivid pink is the 59.60-carat internally flawless oval cut Pink Dream. The rough stone from which the Pink Dream was cut weighed 132.50-carats and was mined by De Beers in South Africa in 1999. It was purchased by the Steinmetz group and revealed in 2003 as the Steinmetz Pink after a long and cautious cutting process.

Previously named the Pink Star and then the Steinmetz Pink, the diamond was put up for auction in 2013 and was supposed to be purchased for a record breaking of $83.2 But finally it was not sold and remained in the ownership of Sotheby’s. In June of this year, Sotheby’s announced that they teamed up with two companies, Diacore and Mellen Inc., to collectively own the stone which is held on Sotheby’s book at a value of $72 million. 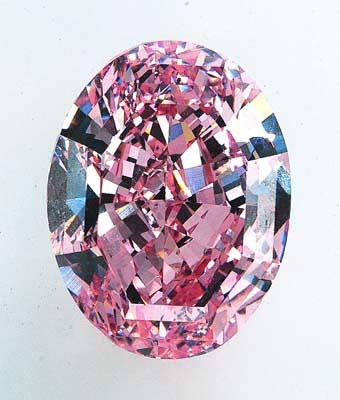 The 12.04-carat Martian Pink is unusual in that it is a round brilliant cut. While rounds are the most popular cut for white diamonds, it is unusual to see fancy color diamonds cut this way, as fancy shapes usually achieve better color saturation.

The Martian Pink was named in 1976 by Ronald Winston, the son of Harry Winston. The diamond was auctioned by Christie’s in 2012 in Hong Kong and sold to an anonymous bidder for $17.4 million, more than double the pre-sale estimate. The auction apparently saw a bidding war between two parties that lasted more than ten minutes. 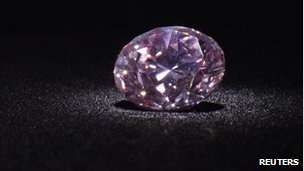 As the supply of pink diamonds dwindles in the coming years, we should not be surprised to see continued price growth for these gems, due to the economy of rarity. Pink diamonds have a wide appeal and are among the most beautiful gemstones in existence.

Tweet
The Virtue of Real is Rare
Las Vegas Aftermath