In The Press
All Diamond
1697 Hits 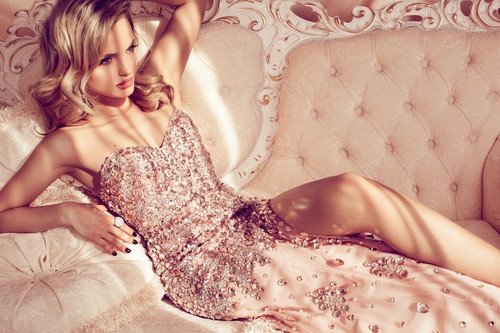 Diamonds are both an object of splendor and one of the ultimate physical stores of value. Adding natural diamonds to anything is not only a great way to enhance its appearance, but also a way to convert it into an appreciating asset. Here is yet another list showing some of the most interesting ways designers are incorporating diamonds into their product lines (read here part 1 , part 2 , Part 3, Part 4 , Part 5 ,Part 6, Part 7 and Part 8) - this time we are focusing on music & fashion.

Perhaps the most surprising company to set up a booth at the 2015 Baselworld watch and jewelry show was Gibson, arguably the most famous guitar maker in the world. They were there to unveil the $2 million 'Eden of Coronet' guitar, made as a joint venture between Gibson, jewelry designer Aaron Shum, and musician and designer Mark Lui. The guitar is a Gibson SA, studded with over 400 carats of diamonds, and made from 1.6 kilograms of gold. Henry Juszkiewicz, chairman and CEO of Gibson Brands, stated in a release: "the masterpiece is a joint effort of three distinct brands. The creativity comes from the process of blending ideas and cultures from different industries, which further solidifies Gibson beyond just a guitar brand. 'Eden of Coronet' is definitely an important milestone for what we target to achieve."

Diamonds have featured in many dresses worn by Hollywood A-listers and members of royal families around the world. However, the title of the world's most expensive dress belongs to the 'Nightingale of Kuala Lumpur' by Faiyzali Abdullah, which debuted at the 2009 STYLO Fashion Grand Prix KL. The dress features a stunning 70-carat, pear-shaped diamond, along with 751 Swarovski crystals. An honorable mention goes to number two on the list of most expensive dresses, which features over 2,000 diamonds including several red diamonds, the rarest of the fancy-colored stones.

If you have the budget, the De Beers limited-edition diamond hourglass has been known to appear for sale at auction houses and galleries around the world, although most who are fortunate enough to own one keep them close to their chests. Created in 2000 a part of De Beers' massive millennium diamond celebration, the hourglass is filled with 2,000 diamonds, totaling 36 carats, which are suspended in a silicone fluid. This allows the stones to cascade slowly to the bottom of the champagne flute-shaped hourglass. Prices range from $25,000 to $35,000. The hourglass is packaged in a unit known simply as 'the box' that has different shades of lighting, including fluorescent black light for a glowing effect.

Five medals weren't the only treasures American swimmer Ryan Lochte took home from the 2012 Olympic summer games in London. Lochte's sponsor, men's grooming giant Gillette, presented him with a set of razors, one plated in gold and the other encrusted with white, yellow, and champagne diamonds. While accepting his medals, Lochte also donned his now-famous $25,000 US flag diamond tooth grill designed by rapper Paul Wall and jeweler Johnny Dang. Despite the swimmer's controversy at the 2016 Olympics in Rio, Lochte and Gillette remain in a sponsorship deal to this day.

Made and owned by Hollywood-based watch maker Giantto, the signature piece $1 million diamond-studded microphone has been used by many music stars including Toni Braxton, Snoop Dogg, Kendrick Lamar, and Chris Brown. It is forged from white gold, and features 650 carats of diamonds.

French design company PlumeBlanche has added to its extensive line of artistic furniture pieces, with a limited edition sofa featuring diamonds set in platinum buttons. The seat also features the company's logo in diamonds, mounted in the full-grain leather. Not surprisingly, only a limited run of these sofas are planned as a few people might struggle with the $190,000 price tag. Surprisingly, this is not the most expensive sofa in the world. That honor goes to the $409,000 stainless steel mirror sofa by architect Ron Arad.

Why are Rough and Polished Prices Disconnected?
Should Diamonds Be Limited Only to Jewelry?