The Mysterious History of Blue Diamonds Blue diamonds are one of the most rare fancy color shades, eclipsed only by red and purple. In recent months, two high-profile blue diamonds have been sold at auction, which has invigorated the market for these incredibly beautiful and coveted gemstones. The sales generated a flurry of reports in media outlets around the world and much public discussion.

They are so rare that according to the Natural Color Diamond Association, only one natural blue diamond can be found on the market for every 100 Picasso paintings up at auction.

Blue diamonds are caused by the presence of boron, a metalloid chemical element that can introduce itself into the crystal lattice structure of a diamond during its growth. Boron is much less abundant on Earth than elements like nitrogen, which cause yellow shades in diamonds. Also, boron tends to be present in higher quantities closer to the surface of the Earth, such as in soil and at times in plants. Boron in the Earth’s mantle (where diamonds are formed) is exceedingly rare, hence the rarity of blue diamonds.

According to "The Fancy Color Diamond Book" by Eden Rachminov, less than one-tenth of a percent of all fancy colored diamonds are Type IIb blues. Most blue diamonds are Type IIb, meaning they have no nitrogen impurities and therefore show a pure blue color without any secondary yellowing influence. Some Type Ia blue stones have been found, but these stones are often a greyish blue, or sometimes a pale greenish hue.

Blue diamonds are coveted not only by gem enthusiasts and investors, but also by the scientific community. Researchers have shown that blue diamonds are the best conductors of both heat and electricity of any substance on Earth, and better than diamonds of other colors. Only very few blue diamonds show any sign of fluorescence, which is a relatively common feature of white diamonds. However, many show red phosphorescence, which turns the diamond crimson red when exposed to short-wave ultra-violet light. Unfortunately, due to their rarity and value, scientists don’t often get the chance to study these diamonds to better understand their unique properties.

The primary source of blue diamonds is the Cullinan mine in South Africa, majority-owned by Petra Diamonds. The mine dates back to 1903 and has yielded some of the finest diamonds on the planet, including the legendary Cullinan I and II, which are now part of the British crown jewels. Although the mine is undergoing an expansion project to increase its production rate, it currently produces fewer than 1 million carats a year, which probably further reduces the number of blue diamonds finds. Other mines that have produced blue diamonds include the Golconda mine in India, the Letšeng mine in Lesotho, and the Karowe mine in Botswana.

Blue diamonds have been a remarkable investment for collectors over the years. The Natural Color Diamond Association recently reported that prices for natural blue diamonds have gradually and consistently increased 12-17% every year over the past decade, regardless of the hue. The results of recent auctions may seem to indicate that that is a conservative estimate.

As most of my readers know, I had the privilege of purchasing a 29.62 carat rough blue diamond in February 2014. The diamond originated in the Cullinan mine and yielded the spectacular 12.03 carat fancy vivid blue, internally flawless, cushion cut diamond. We named it the Blue Moon, because something so rare and beautiful only surfaces once in a blue moon.

When it was sold in November 2015 for $48.4 million, it set a world record for the largest sum ever paid at auction for a jewel. The diamond was also sought after by the scientific community, so I loaned it to the Smithsonian Institute before it was put on display at the Natural History Museum of Los Angeles County. 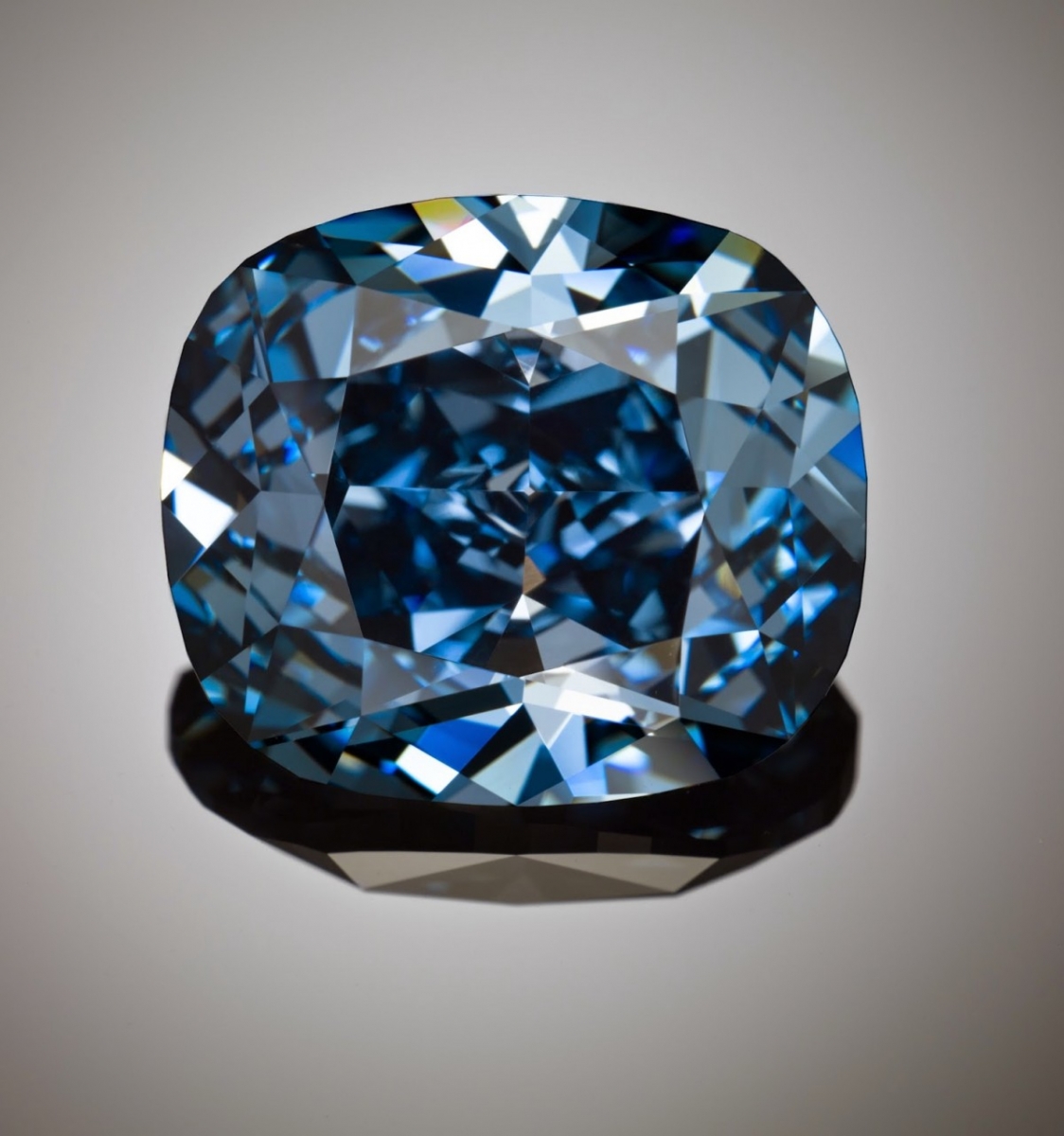 There have certainly been other famous blue diamonds throughout history, as these stones tend to garner much attention whenever they are unearthed. Chief among them is the legendary Hope Diamond. The true origins of the 45.52 carat Hope Diamond remain shrouded in mystery, but most experts believe the stone originates from the mid-1600s and was most likely unearthed in India. Since that time it has endured a long and fabled history. Tragedy and death struck anyone who possessed it. The Hope was donated by Harry Winston to the Smithsonian Institute in 1958. Remarkably, he sent the stone to them wrapped in plain brown paper through first class registered mail, believing that it was the safest way to transport the exceptional diamond.

According to Smithsonian Magazine, the Hope Diamond has only left the museum four times - in 1962, when it was shown at the Louvre; in 1965, when it was displayed at the Rand Easter Show in Johannesburg; in 1984, when Winston loaned the diamond for his company's 50th anniversary celebration; and in 1996, when it was given back to Winston briefly for minor reconditioning and cleaning. 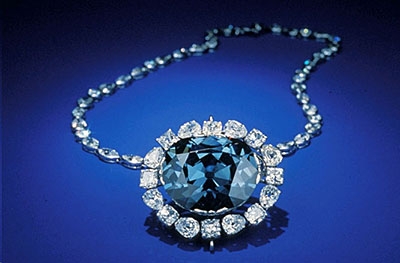 There have also been a few other important blue diamonds over the past century. The Tereshenko is a 42.92 carat pear shape stone whose origins are unclear. The stone was named after its owners, the Tereshenko family, who were sugar barons in pre-communist Russia. In 1916, on the eve of the Russian revolution, the stone was secretly taken out of Russia and passed into private ownership.

The Tereshenko again came up for sale in November 2014, when Christie’s put the diamond up for auction. Within 40 seconds, bids were more than double Christie’s pre-sale estimate. The hammer would drop after a bid of 10 million Swiss francs from the back of the room by Robert Mouawad. 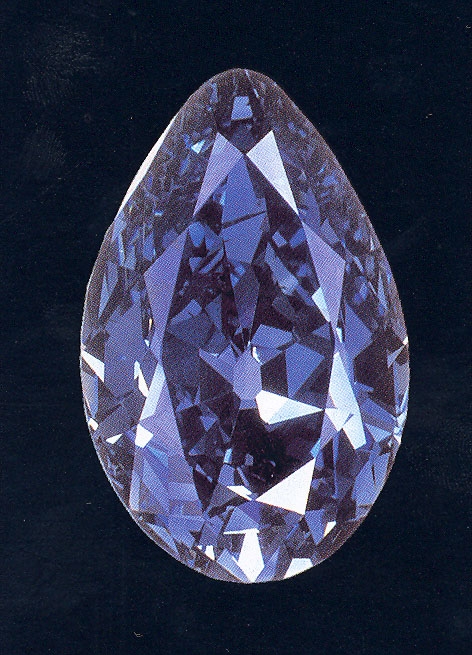 The 31.06 carat Wittelsbach diamond is believed by some to have come from the same piece of rough that yielded the Hope. Its origins can be traced back to the same time period, and most likely originated from the Golconda mines of India, which were the primary active diamond mines of the era. The diamond has been owned by numerous members of European royalty, and was eventually incorporated into the Bavarian crown jewels in 1772, where it remained for more than a century. The stone fell off the radar after Bavaria became a republic but would resurface in the 1960s when Belgian diamond cutter Joseph Komkommer was tasked with re-cutting the legendary diamond. It would again disappear from the public eye, only to resurface in 2008 when it was purchased by Laurence Graff at auction. Graff took the unprecedented step of re-cutting the diamond, which ultimately yielded a stone that was 4.52 carats smaller than the original. However, after re-grading, the Wittelsbach-Graff would emerge as a fancy deep blue, internally flawless masterpiece. 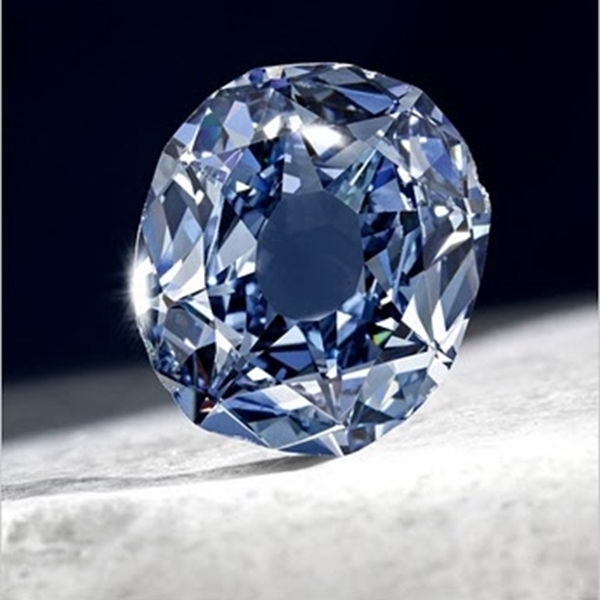 The Winston Blue is a 13.22 carat internally flawless fancy vivid blue pear shape diamond that was purchased by Harry Winston in 2014 for $23.8 million. This set a world record for the highest price per carat of any colored diamond, at $1.8 million per carat. The origins of the Winston Blue are also unknown, but it was probably discovered in South Africa, most likely at Cullinan. The Winston Blue was sold through Christie’s from an anonymous private collection. 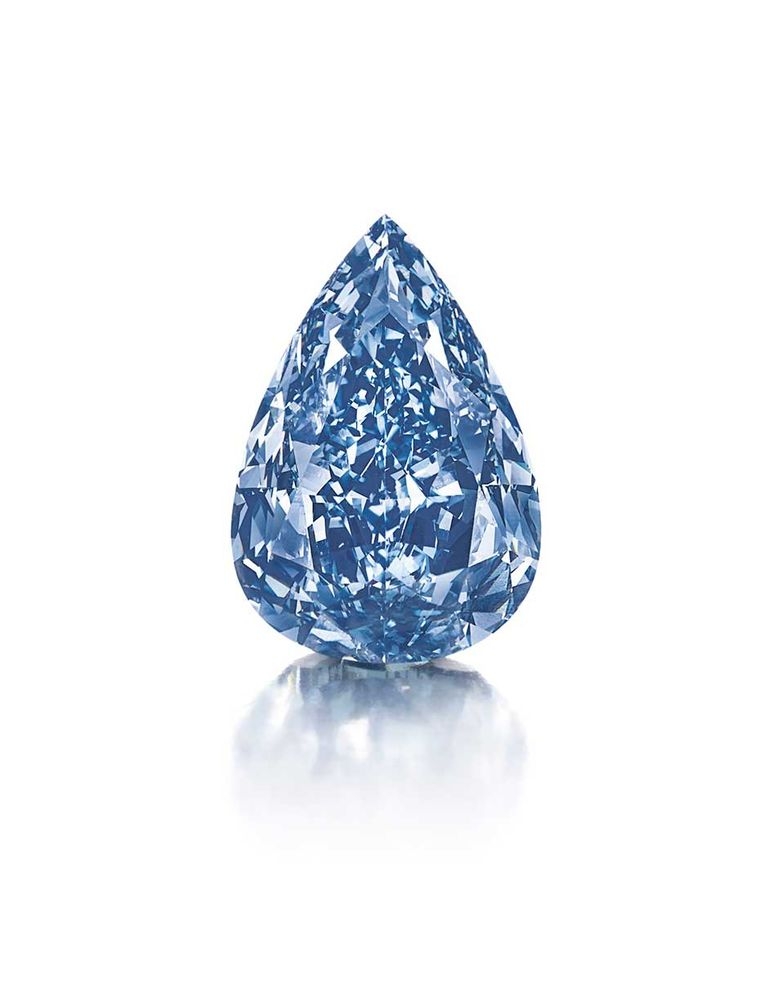 Image of the Winston Blue

The seemingly continuous escalation of prices for blue diamonds has motivated owners to take their profits and we are now seeing diamonds sold at public auctions after being held untraded for many years, in some cases for decades. These diamonds are in extremely short supply, and I therefore feel privileged to have played a role in creating one of the most beautiful jewels the world has ever seen.